Obama Should Stand By Our Military 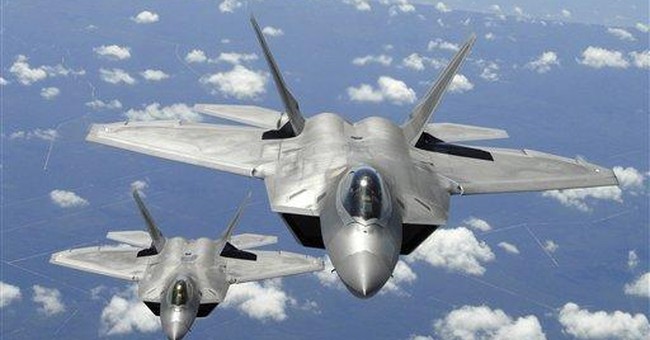 The Obama administration’s Department of Defense has proposed the cancellation of future production of the F-22 Raptor air superiority fighter, on the apparent grounds that we no longer need a fleet of these superb weapons because other nations have nothing to match them. In fact, that is the single best reason to proceed with plans to replace the Air Force’s aging F-15 squadrons with F-22s.

We need the very best if we are to defend America against today’s enemies, and tomorrow’s.

The F-15 was introduced in 1972 as that era’s best fighter. It was followed in 1976 by the F-16, in keeping with a decades-old Air Force doctrine that said we need both types of aircraft. One fighter, the F-15/F-22 family, would largely engage enemy airplanes. The second category, as exemplified by the F-16 and the soon-to-arrive F-35, are designed more for bombing and close air support needed by ground forces.

It was a doctrine that worked well in World War II. P-51 Mustangs were incomparable as fighters, while planes like the P-47 backed troops on the ground with bombing and strafing attacks. The air mission has always been dual, and we have always needed distinctively designed planes to fulfill it.

But the apparent reasoning behind the proposal to stop production of the F-22 seems to be that we only need one – in this case the F-35, which has yet to enter production. That’s like telling a boxer to use only his right hand.

The administration also seems to think that because no potential foe currently possesses aircraft capable of competing with even the older F-15 and F-16 fleets, we won’t need the F-22 in the future.

This is the same reasoning that drove the French in 1940 to rely on the Maginot Line. The Nazis would attack frontally and on foot, they assumed, just as they had in the trench warfare of 1914. Weeks later, German tanks were in Paris.

Throughout history, from the introduction of the English longbow at Agincourt in 1415, nations have upped the technological military advantage to gain supremacy over their foes. Is it really wise to bet that the Chinese or the resurgent Russian empire, or even the North Koreans or Iranians, would never invest in aircraft development in pursuit of ascendancy?

Given the long development time involved in the creation of next-generation weapons systems, nations cannot afford to wait for the opposition to make such advances, or to hope that they won’t. The F-22 concept dates to the mid-1980s, but it took nearly 20 years for the first operational F-22s to be delivered.

We now have about 180 F-22s in the Air Force inventory, with some 60 more on order. They are fast, stealthy and capable. In exercises against well-flown F-15 and F-16 aircraft they have been shown to be far superior, just as those F-15s could fly rings around the fighters of the 1950s.

The F-35 promises to represent a similar quantum leap beyond the F-16, the A-10 and the F/A-18, all of which it would ultimately replace.

In truth we need both capabilities. Supporters of the F-22 say its cancellation would cost some 95,000 jobs. That’s a valid argument, but it is not the central one. We need both the F-22 and the F-35 to assure that our Air Force remains unchallenged worldwide for decades to come.

The sweeping defense budget cuts outlined by the administration ignore one basic truth about defense policy: trimming here to upgrade there leaves you vulnerable here. There are solid reasons to increase America’s special operations and counterinsurgency forces in an era of terrorism, but to do so at the expense of other capabilities could leave us vulnerable to a future threat from a more traditional hostile power. Ironically, this decision was announced less than 48 hours after North Korea tested a missile that could deliver a nuclear warhead to American soil.

President Obama should allow the F-22 program to continue as he proceeds with development of the F-35. To cancel either of them would be to roll dice against the future.