Connection Between Entertainment and Reality Not Really Confusing 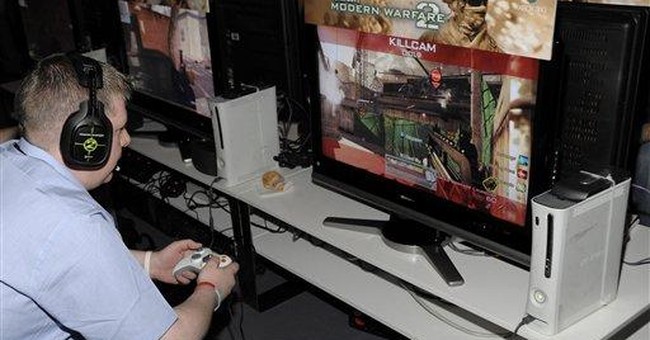 Today is one of those days when the news can confuse us.

Just as millions of Americans tune into the painfully moving memorial service at Ft. Hood honoring 13 Americans whose lives were extinguished by an Islamist soldier in their midst, entertainment news carries headlines about a record-setting war game now available wherever toys are sold.

“Call of Duty: Modern Warfare 2” from video game publisher Activision, is predicted to be the highest grossing first-day release in the entertainment industry. It’s supposed to make more than any book, movie, DVD or video game ever has made on its initial release, including all of the Harry Potter iterations.

We ought not be surprised, but we ought to be concerned. “Call of Duty: Modern Warfare 2” is another immersive first-person game offering players the chance to vicariously participate in acts of violence for the sole purpose of…entertainment.

Billed as an “emotional journey” into the darkest corners of human behavior, the game includes a terrorist scene that is expected to incite controversy (but no doubt will also spark sales). In its effort to push the envelope, the game incorporates actions that generally are considered taboo for video games.

Hmmmm. This would mean the brutal killings and criminal behavior in “Grand Theft Auto IV,” the previous record-holder for first day video game sales, were not so bad. I guess if the person you pretend to kill is as evil as your character, it’s OK.

On a day when headlines use words like “horrific” and “heinous” and “unthinkable” to describe the senseless acts of violence that really happen from day to day, week to week, it seems ridiculous to question the root of violence in our culture.

Violence is entertaining. We do it for fun.

Defenders of games such as “Call of Duty” (note the patriotic-sounding title), “Grand Theft Auto” and others first point to the “mature” rating for these games and claim they do not incite adult players to greater violence. If you’re over the age of 17, they say, you’re not likely to be influenced by the behaviors in which you engage in the virtual world.

But the fact is young people – specifically young men and boys – whose behavior is known to be influenced by extreme violence in video games, are playing these games.

In her book “Watch it! What Parents Need to Know to Raise Media-Smart Kids” released earlier this year, Northern Illinois University professor Mary Larson notes that “More than 3,500 scientific studies have looked at the relationship between media violence and violent behavior. Only 18 of those studies failed to find a relationship between the two.”

Yet all across America, midnight sales events at big box stores like Best Buy and Wal-Mart celebrated the release of a game that promotes the darkest, most disturbing fantasies within the human heart.

Once again, we don’t want to see the cultural connection between a society that glorifies violence and offers it up for entertainment purposes, but then dismisses the possibility that we are breeding our youth to exhibit “unthinkable” and “heinous” behaviors.

America’s children are surrounded by senseless violence on TV, in movies and worst of all, in video games that enable them a realistic experience of “the thrill of the kill.” It’s not maturity that’s needed to play these games. It’s maturity that rejects them as barbaric and harmful to the psyche of anyone who would play them.