For the Gosselins' Sake, Let's Hope Their Show Fails 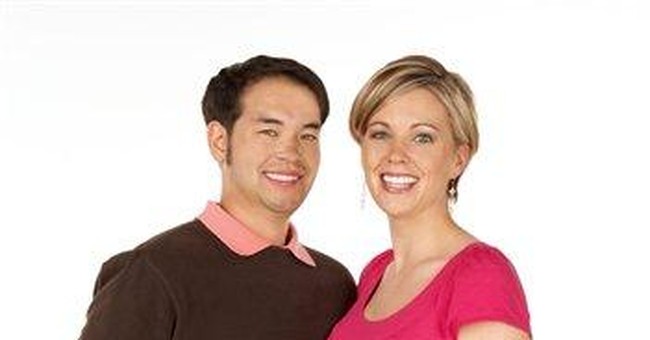 It’s not scientific, but it’s telling nonetheless that 80 percent of those who took People Magazine’s online survey about reality TV stars Jon and Kate Gosselin say the couple’s current struggles aren’t just the typical ups and downs of married life, but instead are reason for them to “step back and re-prioritize.”

Updating you cave-dwellers, Jon and Kate Gosselin are The Learning Channel parents of eight children – a set of 8-year-old twin daughters and sextuplets, age five. Their raucous home life has been chronicled for four seasons as they adjusted to, and then mastered, their roles as parents of multiple multiples.

Along the way, the reality show has offered voyeuristic glimpses into the Gosselin’s marriage and extended family relationships. Their personality traits – both grating and endearing – are the stuff of candid “couch talks” with the shows producers, offering viewers the reassurance that even an unusual family such as this one faces the day-in, day-out struggles that confront the rest of us.

I get why the Gosselins allowed TLC to create a show around their unique family. Diapers and formula aren’t cheap, and heaven only knows what college will cost in 2022. But somewhere in the equation, this couple didn’t count the real cost of this “reality” job.

Season five began on Monday with an hour-long episode featuring the sextuplets fifth birthday party. The cake wasn’t the only thing you could cut with a knife, as the marital tension between Jon and Kate was palpable even on screen. They are both suspected of unfaithfulness, and only they know what is true. Suffice to say, Jon seems remorseful while Kate is hopping mad.

Jon and Kate are much more than a study in living with multiples. They’re a lab experiment for the impact of fame, money and ambition on the health of a marriage and the well-being of a family. Incubating in their Pennsylvania petri dish, the Gosselin’s seem to be growing the fungus of celebrity, and clearly it is corrupting the very thing that caused the cameras to take up residence in their home in the first place.

On Monday night’s show, in separate couch chats, Jon and Kate took pains to express their commitment to their children’s happiness regardless of their future together. The kids come first, or so they said. Unfortunately, this couple thinks happiness is about birthday parties with piñatas and a magician.

Meanwhile, Jon and Kate have learned the self-deceptive vocabulary that allows them to dissociate their marriage from their role as parents. What they haven’t learned is that lifelong marriage is the surest way to put their children first.

It may be tough to admit, but the best parents understand that a stable marriage is the only true way to protect the interests of their children. The marriage is the foundation upon which this family rests – not the financial security of future seasons on TLC, or syndication fees or additional book deals and speaking gigs.

America doesn’t need a reality show about a failed marriage and eight children shuffling back and forth between their parents’ separate homes. The best thing we could do for the Gosselins is to boycott their show, cause their ratings to plummet and give them the gift of a failed series in favor of a successful marriage.

People Magazine’s unscientific poll offers this couple the only answer – step back and re-prioritize. That’s my vote.

In the end, Jon and Kate face the same question that every married couple confronts as they work to maintain a strong and healthy bond: What will they give up in order to have what they say they want most of all?