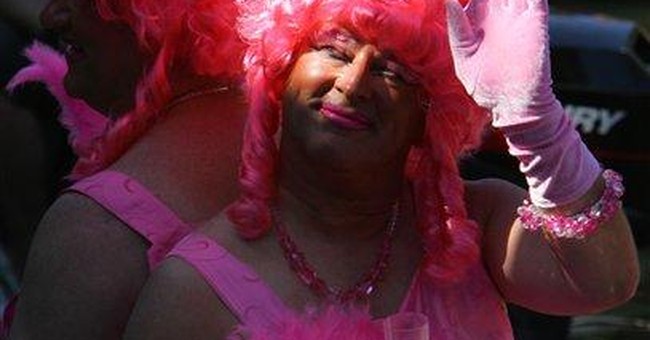 Should biblical churches host gay-glorifying funerals? Should evangelical politics move leftward? Many news organs give us one answer: Yes!

The lead of an Aug. 11 Associated Press story seemed to expose a clear case of homophobia: "A megachurch canceled a memorial service for a Navy veteran 24 hours before it was to start because the deceased was gay."

The story stated that officials at High Point Church in Arlington, Texas, offered to host the service for a gay janitor who wasn't a church member but had worked there -- only to say no when his obituary listed a life partner. The deceased's sister said, "It's a slap in the face."

The AP story did quote the church's pastor's concern that the service would promote the gay lifestyle. That quotation was a throwback to the old AP style of trying to present both sides equally, but the new AP is politically correct, and the overall slant of this story was clear: Christians lack compassion.

A Dallas Morning News story was more nuanced. It noted that the issue was not the deceased's unrepentant homosexuality but that "his friends and family wanted that part of his life to be a significant part of the service."

The church offered to pay for a different venue, and sent over food and a multimedia presentation of photos of the janitor's life, minus the gay-glorifying images his friends and family had wanted to include. The Dallas Morning News story ended with a querying note about whether there's any way to prevent such disputes.

Is there a way to decrease the likelihood of such friction? It's clear that churches need to work out guidelines ahead of time, with the most important being that a church's pastor or someone he designates needs to officiate at a funeral service in the church: Those who want to use church facilities need to agree to abide by his decisions as to what will be part of the service. The base line should be to love all sinners but never to proselytize for sin.

It's important to make these guidelines across-the-board rather than homosexuality-specific: Churches should not promote gay activities in the same way they should not promote other actions that the Bible says are wrong. That won't satisfy gays, but this and similar decisions will help to deal with a recent riptide of Christian Left books and articles designed to sweep evangelicals out to sea politically.

Those books and articles have a political opportunity because many social conservatives, including some evangelicals, have messed up. Some have largely ignored the poor. Others have made partisanship more important than principle or let political messages take precedence over the gospel. Overall, many have emphasized gay marriage and downplayed other issues.

Don't get me wrong: All Scripture, including that which condemns homosexuality, is vital. But if we dwell on that and either ignore or touch only haphazardly on evils such as abortion, sexual trafficking, inhumane prisons and attacks on human rights and religious freedom in many countries (North Korea is one of the most grievous examples), we're putting our own agendas over God's.

Many younger Christians have grown tired of some evangelical interest groups harping on gay issues and skipping other concerns. Many complain about groups that capitalize on hot-button issues and demonize opponents -- largely to raise capital, they think.

The left's criticism of an overemphasis on homosexuality is correct. Its prescription of what to do next is wrong. The Christian Right has made plenty of mistakes, but it's also a mistake to embrace books of the Christian Left that often recycle failed liberal ideas.

And it's also false compassion to honor what the Bible says are self-destructive tendencies (aka "sin"). We all sin to some extent, and even if some have genetic tendencies toward homosexuality, adultery or alcoholism, biology is not inevitably destiny. Some are on the fence, and none of us should help to push them over.