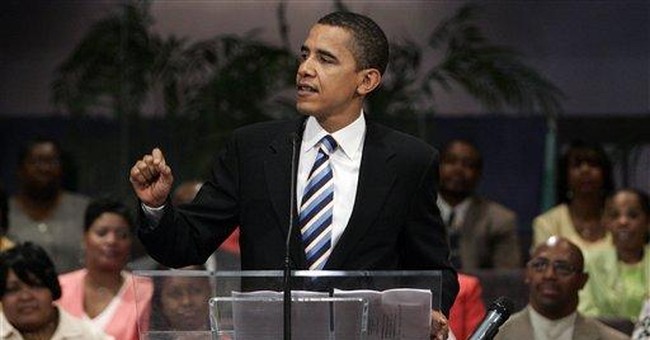 Nineteenth-century novelist Gustave Flaubert used to joke about archaeologists discovering a stone tablet signed "God" and reading, "I do not exist." His punch line had an atheist then exclaiming, "See! I told you so!"

These days, nothing stops atheistic caissons from rolling along the bookstore aisles. Maybe that's because atheists on average have small families and lots of discretionary doubloons jingling in their pockets. Sam Harris' "Letter to a Christian Nation" and Richard Dawkins' "The God Delusion" were big best sellers during 2006. Christopher Hitchens' "God Is Not Great" has ascended this year.

Concerning "The God Delusion," even Publishers Weekly noted, "For a scientist who criticizes religion for its intolerance, Dawkins has written a surprisingly intolerant book, full of scorn for religion and those who believe. Even confirmed atheists who agree with his advocacy of science and vigorous rationalism may have trouble stomaching some of the rhetoric: the biblical Yahweh is 'psychotic,' Aquinas's proofs of God's existence are 'fatuous' and religion generally is 'nonsense.'"

Harris also prefers exclamatory words such as "preposterous" to either reason or evidence. He asserts certainty about what he admits not knowing: "How the process of evolution got started is still a mystery, but that does not in the least suggest that a deity is likely to be lurking at the bottom of it all." He complains not only about ignorance but about moral failings: "An average Christian, in an average church, listening to an average Sunday sermon has achieved a level of arrogance simply unimaginable in scientific discourse."

Yet Harris, for all his attacks on Intelligent Design, does not even understand the distinction between macro-evolution -- one kind of creature changing into another -- and micro-evolution. One of his proofs of theistic obtuseness is that "viruses like HIV, as well as a wide range of harmful bacteria, can be seen evolving right under our noses, developing resistance to antiviral and antibiotic drugs." No one claims that viruses don't evolve; the debate is whether they turn into something else.

This year's champion screed, by Christopher Hitchens, also oozes scorn: "Monotheistic religion is a plagiarism of a plagiarism of a hearsay of a hearsay, of an illusion of an illusion, extending all the way back to a fabrication of a few nonevents." The subtitle of "God Is Not Great" could hardly be more extreme: "How Religion Poisons Everything." The "everything" claim sounds improbable. Are 1.3 billion Muslims all murderers? Might Christianity have produced 50 percent evil and 50 percent good? If not, how about 30 percent? Ten percent? Will not Hitchens relent from his anger if five percent is good?

Even New York Times columnist Nicholas Kristof has praised America's evangelicals for fighting sexual trafficking in Eastern Europe and slavery in Sudan -- but the Times gave "God Is Not Great" an adulatory review.

Hitchens calls "the whole racket of American evangelism a heartless con" -- but I've met hundreds of compassionate evangelicals who must be dumb, because they've spent their lives in a racket that's yielded them almost no money. They've adopted hard-to-place children, built AIDS orphanages in Africa, helped addicts and alcoholics turn their lives around, and much besides.

So why, despite the evidence, are authors such as Dawkins, Harris and HItchens so doctrinaire in their denunciations? Alister and Joanna Collicutt McGrath offer a reason in their book, "The Dawkins Delusion": "Until recently, Western atheism had waited patiently, believing that belief in God would simply die out. But now a whiff of panic is evident. Far from dying out, belief in God has rebounded "

So pity the atheists: They're cornered and desperate. But God can break through and change their lives and thinking, as He changed mine in the 1970s when I was saying what Dawkins, Harris and Hitchens say.