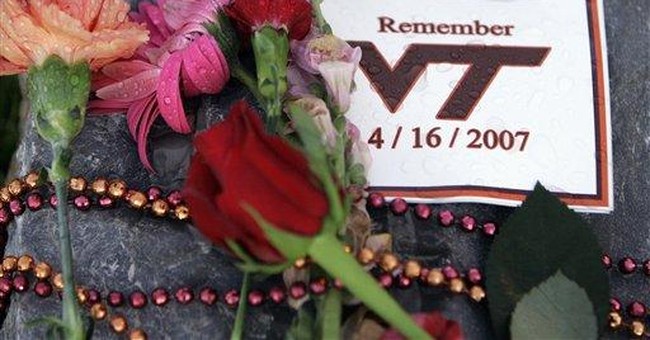 In 1961, when astronaut Gus Grissom tried to avoid responsibility for losing his spacecraft, he said, "the hatch just blew." Or so Tom Wolfe reports in "The Right Stuff" (1979), which four years later became a great movie.

That was an unusual statement 46 years ago, but now we regularly see folks avoiding responsibility by saying, "mistakes were made." For example, Virginia Tech killer Seung-Hui Cho just blew. It wasn't really his responsibility. He was "troubled." He "had issues." Maybe it was President Bush's fault, as Rep. Jim Moran charged.

I mention this not to bring back nightmares but to contexualize the important observations British psychiatrist Theodore Dalrymple makes in his tough-minded book, "Life at the Bottom." That book was 49,631st on Amazon's sales list last time I looked, but it should be at the top of the reading list for all who hope to minister to many among the imprisoned and the "underclass" generally.

Dalrymple writes, "Listening as I do every day to the accounts people give of their lives, I am struck by the very small part in them which they ascribe to their own efforts, choices, and actions. They describe themselves as marionettes of helplessness."

He gives examples. One killer said of the murder he committed, "the knife went in," as if he had nothing to do with it. A thief who broke into churches, stole their silver objects, and then burned them down to destroy the evidence, said the problem was that churches had poor security and valuable objects: The combination was impossible to resist. Another troubled person said, "My head needs sorting out."

Members of the underclass frequently plead the innocence of inevitability, but so do those in the upper class. When C.S. Lewis spoke in 1944 to university students who were on the way to becoming England's leaders, he said, "To nine out of 10 of you the choice which could lead to scoundrelism will come, when it does come, in no very dramatic colours. Obviously bad men, obviously threatening or bribing, will almost certainly not appear."

Lewis noted that the invitation to do wrong would come in a way hard to turn down -- "Over a drink or a cup of coffee, disguised as triviality and sandwiched between two jokes, from the lips of a man, or woman, whom you have recently been getting to know rather better and whom you hope to know better still -- just at the moment when you are most anxious not to appear crude, or naif or a prig -- the hint will come."

The slide at that point seems greased: "you will be drawn in, if you are drawn in, not by desire for gain or ease, but simply because at that moment, when the cup was so near your lips, you cannot bear to be thrust back again into the cold outer world." Lewis, describing this desire to be in the "Inner Ring," emphasized that "Of all the passions the passion for the Inner Ring is most skillful in making a man who is not yet a very bad man do very bad things."

That first decision may lead to others: "If you are drawn in, next week it will be something a little further from the rules, and next year something further still, but all in the jolliest, friendliest spirit. It may end in a crash, a scandal, and penal servitude: it may end in millions, a peerage and giving the prizes at your old school. But you will be a scoundrel." And yet the scoundrel looking back rarely remembers choosing: His life just blew. Enron just happened.

What's the antidote? Nothing will work all the time, but how about churches and schools that inculcate a sense of biblical right and wrong? How about teaching and believing that the glory of the Inner Ring isn't all that terrific, especially in comparison to God's glory?