Memo to Politicians and Poets: Fame Is Fleeting 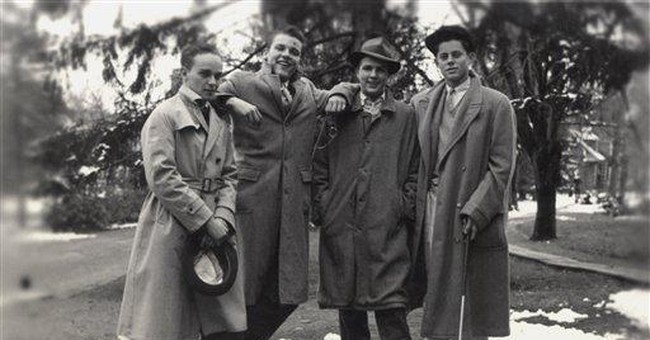 If you liked making bets you'd never lose (up to now), try asking the name of the American poet whose statue sits on the "Literary Walk" of New York's Central Park. It's not Longfellow, Whitman or Robert Frost. It's ...

"Would you like some information about Fitz-Greene Halleck?" asked Kenan Minkoff of each passerby on the afternoon of July 8, the birthday (in 1790) of the man once dubbed "the American Byron."

About every third person asked, "Who was he?" Then Minkoff, a New York playwright who had decorated Halleck's statue with daisies, would talk about the man of whom Edgar Allen Poe wrote, "No name in the American poetical world is more firmly established than that of Fitz-Green Halleck."

Minkoff accurately explained that President Rutherford B. Hayes and his entire Cabinet, along with 10,000 spectators, came for the dedication of the statue in 1877. Minkoff had copies available of Halleck's most famous work, "Marco Bozzaris." The Greek patriot died in 1823 fighting for his country's independence against the Turks, and American schoolboys once memorized lines like: "They fought like brave men, long and well; They piled that ground with Moslem slain; They conquer'd; but Bozzaris fell, Bleeding at every vein."

Fitz-Greene Halleck's great-great-great grandfather was John Eliot, the Puritan "Apostle to the Indians." Halleck departed from that heritage, largely functioning as a devotee of New York society and some men within it. He was, according to the Dictionary of Literary Biography, "a favorite guest at balls and parties."

Minkoff's dad is an antiquarian bookseller in Massachusetts, so Minkoff is familiar with many pre-20th century American authors -- and when he passed by Halleck's statue one day, "It hit me that I didn't know who this man was." As he learned more, at a time when his own writing was hitting roadblocks, "I was drawn to him and to what his reputation shows about the fickle nature of fame. He reminds you not to take fame so seriously, or to stop working because of lack of fame."

A young man wearing a Derek Jeter jersey looked up at the statue, which depicts Halleck in elegant attire, seated in an ornate Victorian armchair, pen in his right hand and parchment in his left.

"Would you like to learn about America's first great poet?"

Minkoff is the tongue-in-cheek founder and president of the Fitz-Greene Halleck Society. He hopes that the society will gather every July 8 so that members can bring rejection letters from publishers and other objects related to failure and contemporary scorn. He calls Halleck "the anti-Melville," because Herman Melville was largely ignored in his own time but is revered now, while Halleck has gone the opposite way.

(Appleton's Cyclopedia of American Biography, 1887, observed that, "Of Halleck's poetical writings it has been well said that brilliancy of thought, quaintness of fancy and polished energy of diction have given them a rank in American literature from which they will not soon be displaced." The Cyclopedia had a short article noting Herman Melville's tale of his capture by a tribe of cannibals; the article merely listed Melville's other works, including "Moby Dick, or the White Whale.")

Minkoff asked a young woman walking with a toddler, "Would you like to know about Fitz-Greene Halleck? We're celebrating his birthday because he's forgotten."

"Would you like some information?" Minkoff asked the toddler.

Halleck's tribute to Bozzaris concludes, "Bozzaris! ... thou art Freedom's now, and Fame's, One of the few, th'immortal names That were not born to die."

But Mark Twain and others ridiculed that style of high-pitched declamation, and both the ode to Bozzaris and its author soon showed their mortality. Our media age has speeded up both rises and falls, yet well before anyone spoke of "15 minutes of fame," Isaiah and Peter in the Bible each wrote, "All flesh is grass."