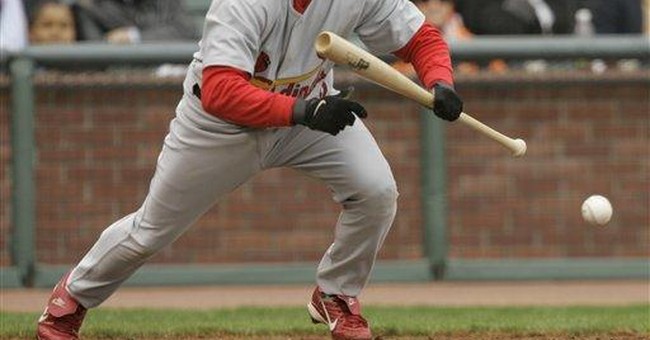 ST. LOUIS -- Barring a last-minute switch, Cardinals shortstop David Eckstein will not be at next week's All-Star Game -- but Sports Illustrated gave him a more important recognition this spring. The magazine asked 413 Major League Baseball players, "Which player gets the most out of the least talent?" -- and Eckstein received 77 percent of the votes. No other player received more than 3 percent.

Eckstein, the MVP of last year's World Series and also the shortest athlete on the field, at a generously measured 5-foot-7, is not without talent: He can hit a curveball, which Michael Jordan, a foot taller, could not. But his work ethic and faith sustain him. When I asked him about his success before a game last month, he responded, "Just keep working, working, working, and don't worry. If you start worrying in this game, everything becomes even harder. Work is your friend. Worry is your enemy."

Question: How does he keep from worrying in a sport where a player can hit the ball perfectly and still make an out? Eckstein explained, "I'm not as big as the other guys, so I've always known that I had to work real hard. But even with all that, I couldn't do anything without God. It's all Him. Let Him take control. If I go 0-for-4, I just keep working hard and praying. I'm not anxious because I know it will turn out all right My faith in Jesus is everything to me. You have to understand that He's working in His way. I've got to do everything possible to be prepared, and then to let Him take over."

Eckstein showed that preparation during pre-game fielding practice. Some players are lackadaisical about it, but at 4:10 p.m. (the game would start three hours later) he was fielding ground balls again and again. There's nothing slick about his style. His arm is not that strong, so he has to take a running step toward first base to get some momentum behind his throws. The same effort was evident in batting practice. Some players go through the ritual of bunting the first pitch, but Eckstein bunted almost half the pitches. Some players just hit up the middle, or put on a home run show for fans, but Eckstein was practicing positional hitting -- hit one pitch to right field, the next to left.

When his pre-game practice ended, Eckstein politely signed autographs for fans, including one mom who had her children dressed in No. 5 and No. 27 jerseys -- those are the numbers of stars Albert Pujols and Scott Rolen -- and kept calling him Mr. Ecksteen. (It's pronounced Eck-stine, but the shortstop did not correct her, nor did he correct Bud Selig when the baseball commissioner mispronounced Eckstein's name last October while awarding him his World Series MVP award. "Doesn't matter how they pronounce the name," Eckstein said. "I'm just glad to be here.")

He seems all energy on the field, not even standing in his shortstop position. He often walks around in little circles, and he runs into the dugout at the end of each inning. A psychologist might mutter "ADD," but Eckstein says he has "joy" just to be able to play. He rode an emotional rollercoaster in the seventh grade when it turned out that two sisters and a brother needed kidney dialysis and (eventually) received transplants. Eckstein wrote in his autobiography for kids, "Have Heart," that "Despite our family misfortune, nobody blamed God or turned bitter or asked: 'Why us?'"

He concluded, "Our faith taught us things happen for a reason. We might not know what that reason is, but our job is to move forward Having heart is easy when everything is going your way. The true test comes when things aren't." When I asked Eckstein what he prayed for, he responded, "I pray not to get hurt, and that I'll be able to take the ability God gave me and multiply it."