Mark Lewis
|
Posted: Sep 23, 2022 2:34 AM
Share   Tweet
The opinions expressed by columnists are their own and do not necessarily represent the views of Townhall.com. 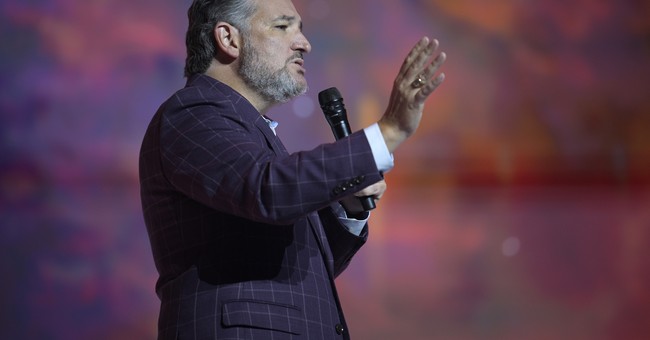 Ted Cruz must have decided that either he didn’t want to be President, or he didn’t have a chance.  He has apparently cast his lot with the Democrats in support of the so-called “Journalism Competition and Preservation Act” (JCPA).  Big Media in a cartel with Big Tech.  Can ANYTHING good come out of THAT?  But Cruz said, “I’ve had extensive conversations with Senator [Amy] Klobuchar…”  Why??  Did he honestly think he could convince her to do something good?  Why are Republicans ALWAYS so incredibly naïve?   Ted, if you don’t want to be classed with hogs, don’t wallow with them in the mire.  Republicans in Congress should have one absolute rule: if ANY Democrat supports a bill, oppose it.  Cruz probably just flushed his Presidential aspirations down the sewer.

Mr. Cruz represents Texas, of course, and I’m a Texan.  He is one of the finest Senators the state has ever had, and he would surely be head and shoulder, and waste and knees and toes, above any candidate the Democrats put forth.  But Mr. Cruz has a peculiar bone somewhere in his head that causes him, on occasion, to do incredibly stupid things that leaves one scratching one’s head.  Remember February, 2021, when global warming almost froze Texas into oblivion?  Mr. Cruz, rather than stay and aid his constituents, decided on a vacation to Cancun.  Get your head out, Ted.  Well, nobody is perfect, but chances are, he’ll never be President, especially if he sucks up to Democrats any more.

What about Mike Pompeo?  He has indicated that he may pitch his hat into the Presidential ring.  I don’t know much about Mike, except he’s lost a lot of weight.  He seems to have good conservative credentials, but we’ll wait until he opens his mouth a little more to decide.  I don’t think he has much (any) chance, unless something very startling happens. And it could.

Liz Cheney said she might run.  If the Republicans nominate her, I’m staying in Thailand the rest of my life, thank you.

I don’t really know who else, among Republicans, is interested in the job, at least interested enough to truly challenge Donald Trump and Ron DeSantis.  Barring some major shock, one of those two will almost certainly be the Republican nominee in 2024.

I will unequivocally say that I believe Donald Trump was, far and away, the best President the United States has had since Ronald Reagan.  Nobody even close.  It absolutely enraged (and enrages) me the way the left deliberately, and constantly, lied about him, abused him, cheated him, and probably stole the presidency from him.  He has every right to be thoroughly angry and want vindication.  But 2020 is over, and we can’t look back.  We must look ahead, and we must put our best person forward in 2024.  We have to win in 2024, provided the country still exists after two more years of Joe Biden.  I have no doubt that Donald Trump would be an excellent President again.  The question is, the ONLY question is, can he win?

Ron DeSantis may not be as good as Donald Trump, or he may be better.  We really won’t know unless he becomes President.  He would certainly be better than any Democrat.  And given what I have seen of Mr. DeSantis so far, he would make a magnificent leader.  As of right now, I could vote for either he or Trump.  The question is, the ONLY question is, who has the best chance to win?  Neither will get any base-Democrat votes, of course, but my fear is that Mr. Trump has aggrieved too many Independents, and even some Republicans, in ways that Mr. DeSantis has not (yet).  That is, to me, a major concern.

DeSantis is a politician; that’s good and bad.  The good is, he knows how the play the game.  The bad is, he’s a politician.  Trump is/was a businessman.  That’s good and bad, too.  The good is, he’s not a politician, the bad is he didn’t know how to play the political game very well.  And it cost him, and I’m not sure he can ever recover from it.  Trump needs to control his mouth.  Many people will vote against him again simply because he’s Donald Trump.  No rationale, they just don’t like the man.  Some will just stay home and not vote at all, especially if given a choice between Trump and Biden (or Harris or Newsome).  DeSantis, right now, doesn’t have Trump’s baggage, and that is the main reason, maybe the only reason, he might be the better choice.

We owe our highest allegiance to our country (well, behind God and family), and that means putting forth the best candidate who has the best chance to win.  If Ron DeSantis chooses to run (he hasn’t even said he will yet, he has rightly been concentrating on his current gubernatorial campaign), can he swing enough dedicated Trump-loyalists to his side to win the nomination?  It will be interesting to see.  I do hope the two men will engage in honest debate and not maliciously go for each other’s throats.  That would look bad and sour a lot of people.  Civility, guys, please.

We are still a good 18 months from having to decide, and a lot can happen in that time.  The 2022 midterms are pressing right now.  But, for the salvation of America, we have to win in 2024.  Or I stay in Thailand.

And, Ted, I’m a Texan.  Why did you have to embarrass me so?

Mark Lewis is a native Texan currently living in Thailand.  He has a Master's degree in history and has taught history and English in America, South Korea, and China.  His first book, Whitewater, a western novel, was recently published, and is available at Amazon, Barnes and Noble, and Eliva.com.  And check out his new blog at thailandlewis.blogspot.com