If principles matter, so does McCain 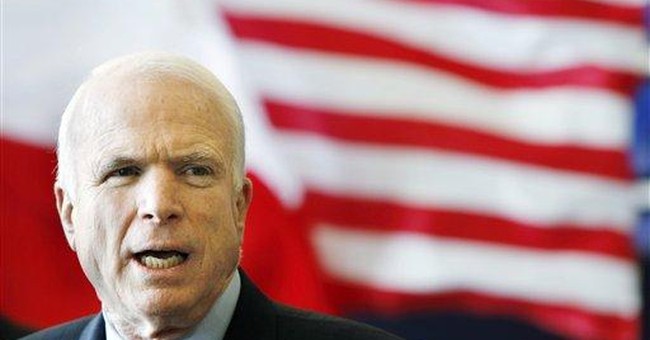 It's not about John McCain.

Nor is it not about Rush Limbaugh or Laura Ingraham or James Dobson, although their views harmonize more closely with my own and those of most conservatives than do McCain's.

This election isn't about party or personalities, but about principles that will guide our country for the next four years or more.

Will our nation trend in a direction that is generally conservative or one that reverses modest gains of the past 28 years and lurches toward cradle-to-grave paternalism?

That's why, despite several disagreements, John McCain gets my support against whomever the Democrats nominate. It's also why principled conservatives should check their McCain disdain at the ballot box.

Recently, some conservatives behave as if they have nothing to lose if McCain loses. But a McCain loss equals a Barack Obama win, and we have plenty lose from that.

On these key issues the choice between McCain and Obama cannot be dismissed as the lesser of two evils. The choice is clear and the stakes are enormous.

McCain is one of just five Senators who flatly reject pork-barrel budget earmarks. He has vowed to veto any spending bill containing earmarks and has already incurred the wrath of several pork-loving Republicans. That's a welcome change from the you-scratch-my-back, I'll-scratch-yours spending of the last eight years.

By contrast, Obama has promised programs calculated to grow the already bloated budget by $900 billion.

Despite his vote against the Bush tax cuts, McCain has vowed to fight to preserve them. Obama conveniently forgets that middle class families benefited most from the Bush tax cuts and instead demagogues against "tax cuts for the rich." However, he can't pay for his big government utopia without squeezing the working class hard.

As a Vietnam veteran, McCain understands the lasting consequences of an ignominious defeat. America's stature was badly damaged for years after Vietnam. We now see that McCain's prescription for Iraq after Saddam was right, and the Bush-Rumsfeld strategy was wrong.

Had Obama's policy of surrender and retreat carried the day, the now-vindicated surge would be merely another paper gathering dust on a shelf, Iraq would remained mired in bloody sectarian attacks, and Iran would be emboldened to direct its terrorist accomplices toward Afghanistan.

Perhaps the most critical, principled reason to support McCain is the Supreme Court. Judging by their appointments' adherence to the text of the constitution, Republican presidents have had mixed success in rolling back judicial activism.

However, two things are indisputable: the constructionist justices on today's court were all appointed by Republicans, and the Democrat appointments are all undeniably liberal activists.

John Paul Stevens and Ruth Bader Ginsburg, the two justices most likely to retire soon, are both activists who re-write the constitution in contravention of the plain text. Replacing either or both with another John Roberts, Antonin Scalia or Clarence Thomas — each of whom McCain supported — could at last restore the court's historic role as a defender of broad individual liberty and a restraint against over-reaching government.

If Obama makes the next appointment, we can be certain he will fortify the court's activist wing. Should a constructionist justice retire or die, Obama could swiftly reverse the gains of the last 28 years.

Finally, the candidates' views on the sanctity of human life provide another stark contrast that conservatives dare not forget. McCain has consistently voted to restrict abortion, parting with pro-lifers only on stem cell research. Obama not only supports abortion on demand but callously voted to deny medical care to infants born during unsuccessful abortions.

Some conservatives argue that a Democrat victory would galvanize Republicans for 2010 and produce a public backlash, a la 1994. That's a tremendous gamble.

Democrats controlled Congress for 40 years from 1955 to 1995. In the Senate, Democrats ruled for 34 of those years. Here in Colorado, perhaps more than anywhere else, Republicans should realize how quickly political fortunes can change and how hard it is to reverse that tide.

We must put aside self-pity and frustration and do what we always have done: choose the right and responsible course for our country.

If instead we purposefully withhold our votes to gratify our personal pride and prejudice, the surrendered freedoms, suffocating tax burdens, and national insecurity that result will be as much our responsibility as that of those we "helped" to elect.