If the Trump/Putin Press Conference Shocked You, You're Not Paying Attention

Mark Davis
|
Posted: Jul 17, 2018 12:01 AM
Share   Tweet
The opinions expressed by columnists are their own and do not necessarily represent the views of Townhall.com. 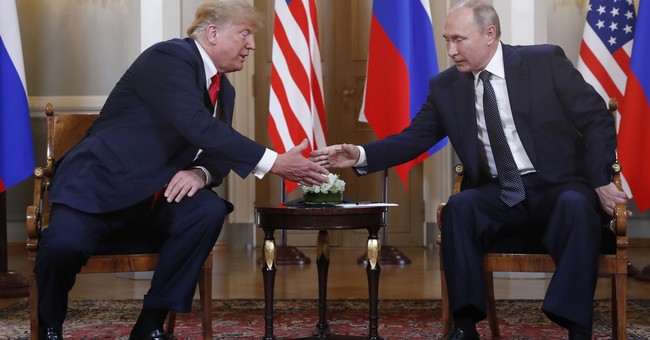 Disgraceful. Embarrassing. A complete lack of grasp of the situation.

Such were the observations about President Trump’s performance at the joint press conference with Vladimir Putin. Everyone is free to like or dislike the way Trump navigates the world, but I would suggest those descriptions are more suited to the swarm of wild overreaction.

It has become a familiar rhythm for the President to do or say something, only to be attacked reflexively by his harshest opponents. But the Monday festival of totally wrongheaded analysis ensnared even the occasionally sympathetic.

One could expect the bug-eyed calls for impeachment, and the media chorus that Trump had somehow committed some grave offense against American honor. But the triangulation necessary to understand this episode was apparently too much heavy lifting for even some occasional supporters.

So, I’ll make it easy. If you were expecting Donald Trump to wag a finger at Putin at that lectern in Helsinki, throwing down an ultimatum to never, ever mess with our elections again, that was enormously foolish.

Imagine for a moment that the President had told Putin where to stuff that souvenir World Cup soccer ball. The media would have briefly approved, critics might have issued momentary grudging appreciation, and John Brennan might have put down the voodoo doll. Meanwhile, the layer of ice that would have encased the relationship would shut the door on things Trump actually wants to achieve, goals a little more lasting than kicking Putin in the shins in public.

He would like to cooperate with Russia in fighting ISIS. He would like to loosen the buddy relationship with Assad in Syria. He might even seek to wheedle a Russian exit from Crimea. And being Donald Trump, he would surely like to see if there are trade deals to be gleaned from improved relations.

One might suggest that those are noble, but wouldn’t he also like to dissuade Russia from launching cyberattacks into our political process? I’m sure he would. He may well have made that clear behind closed doors over Finnish cuisine. But let’s spend a moment examining the source of all of this sudden hand-wringing.

How many people condemning Trump for coddling Putin raised the slightest eyebrow at the Barack Obama open mic wink to the Russians that he would have “more flexibility” after the 2012 election?

And how many of these sudden warriors for election purity are on the record fighting for voter ID and other laws which protect us from the real-life threat of illegal voting?

From the shrill retorts Monday afternoon, you would think Trump had delivered our nuclear codes to the GRU. The main thrust of the vilifications was: 1) We should be really tough on bad countries, and 2) Russia is a really bad country.

Fair points, but please. We are downright chummy with China, the largest, most evil remaining Communist dictatorship on the planet. And it’s not as though Obama laid down an eight-year legacy of toughness versus Russia, or anyone else. The opportunistic gasps at Trump’s comments are born of a different passion: profound distaste for him.

That distaste ranged from the predictable howls of the haters to the more nuanced (but still sharp) revulsion of establishment elitists, haughty status-quo devotees and the usual suspects for whom Trump has always been too brash, too unmannerly, too, well, Trumplike.

Their hyperventilations will do little to gin up the backlash they seek. The online taunts were immediate, along the lines of “Hey, MAGA people, where’s that Trump strength you people love so much?”

The answer is simple. The strength his base expects every day is not some empty political theater designed to win praise from CNN. There is only one battle that matters in the short term, and that is the attack on his presidency from the Mueller probe and the weaponized subsets of the FBI and Department of Justice.

The slightest hint of a Trump denunciation of Russian meddling would have been instantly, virally blasted around the universe as a confession that his election was indeed illegitimate. The hounds baying for his demise gleefully conflate Russians hacking Democrat emails with the Trump campaign conspiring to deny Hillary Clinton her rightful victory. They know that an underinformed public will lap up that narrative if they can hammer it forcefully enough.

We will never know the exact language Trump may use to address past meddling or discourage it in the future. But anyone who was expecting some high-drama public showdown in Helsinki is ignorant of what Trump seeks to do long-term with Russia, and is oblivious to the baseball bat he would have handed his enemies to beat his brains in.

That is excusable among the general public. But for those who pay attention to these matters for a living, the blindness is willful.