Mark Davis
|
Posted: May 31, 2016 12:01 AM
Share   Tweet
The opinions expressed by columnists are their own and do not necessarily represent the views of Townhall.com. 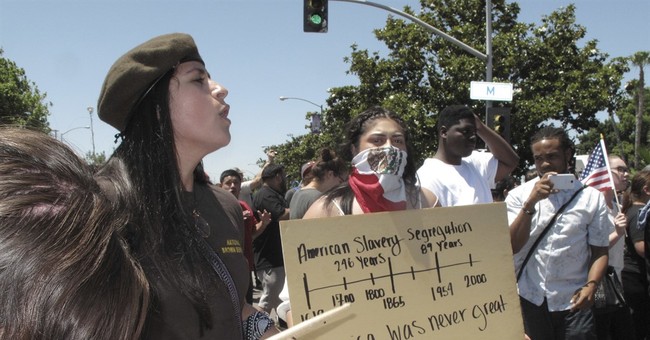 As we ride the white-knuckle Trump train to the Cleveland GOP convention and beyond, the air will fill with criticisms of him. Some will come from Democrats, some from rebellious Republicans. From both sides, some of those criticisms will have merit and others will be simply ridiculous.

So here’s a convenient guide for assessing the anti-Trump pronouncements which we will swim in all summer:

“He is not a consistent conservative.” Completely correct. His populism certainly borrows from some strains of conservative thought, but his trade policies are of a more populist bent, and his willingness to entertain a higher minimum wage is straight-up liberalism.

Many conservatives who have long supported him know he does not bat a thousand, or even .800, but they feel his energy on immigration, job creation and hammering political correctness may result in more genuine conservative victories than, say, a Jeb Bush presidency might have yielded.

“He doesn’t like Hispanics/ women/ fill in the blank.” The attempt to portray Trump as a racist or misogynist fails on its face. It is a slander leveled by people who know he is likely to fare better with Latinos in November than Mitt Romney did in 2012 (27 percent). I’d love to send this year’s entire seventeen-strong GOP field through the streets of South Brooklyn. Precisely one would get waves of appreciative welcome, and it’s not either of our candidates who were actual Hispanics.

As for women, any Republican faces a challenge in the current era of government as master nurturer. But strong, self-reliant women are pervasive among Trump supporters, and there is not a whiff of mistreatment of women in his business history. Quite the opposite, Trump World appears to be a complete meritocracy, where women and people of color are rewarded for performance without regard to race or gender. This is admittedly jarring in a country that has been led too long by Democrats obsessed with weaponizing both.

“He seeks evangelical support, but has hardly led a Biblical life.” Direct hit. And to many, it appears not to matter one shred. Maybe it’s because every honest Christian who has traveled a redemptive path will tell you that God is not interested in your missteps, He is interested in your next steps.

Rehashing Trump’s multiple marriages and long-ago boasts (okay, most were long ago) are as irrelevant as a litany of any sinner’s past, as long as the current path seems solid. There is no evidence that he carries the stain of current violations of any major commandment, and while “Two Corinthians” may reveal a less than pastorly Bible literacy, many pastors back him.

Why? Because while the GOP field boasted many actual evangelicals with devout biographies, none seems to carry the potential to do what Christianity needs most urgently right now— blast through the suffocating political correctness that seeks to strangle our religious freedoms every day.

“He is not a real pro-lifer.” Depends on the meaning of “real.” Does he have the moral clarity to assert that life in the womb is sacred, even in cases of rape and incest? He does not. Has he bought into the absurdity that Planned Parenthood does some good things? He has, meaning he cannot grasp that the organization would not exist but for abortion services. These are not good.

But there is no reason to believe that he is somehow lying in his testimony of becoming more pro-life as the years have passed. We conservatives are a funny lot; we persuade and coax and convince and lure people to our side, and when they pivot to agreement with us, we kick them in the crotch for not being with us their whole lives.

“We can’t count on his Supreme Court nominees.” What do people want him to do? He gave us a fat list of wonderful constitutionalist judges who would honorably fill the shoes of Antonin Scalia. Do we need a joint news conference with one of those names so that skeptics can know he means it? That is wildly inappropriate before he even accepts the nomination, and best left to the first days of his presidency, when he can make that announcement surrounded by the compelling imagery of the White House.

Trump’s tormentors responded to his worthy list with the same taunt they roll out with every conservative promise he makes: You can’t believe him, he’s a total liar. This is the mantra of those who don’t just doubt him; they hate him.

“He does stunningly unpresidential things.” Yes, he does, and most of them have helped him win the nomination. To the chagrin of more mannerly tastes, his admittedly brash and aggressive style has been punctuated with moments of truly embarrassing excess.

Those moments have dwindled as he has sent his rivals home. His discipline should sharpen even further now that he has but one opponent to target, and those attacks on Hillary Clinton will delight rather than annoy millions of Republicans who have watched him flay their favored hopeful.

“He contributed to Democrats.” No kidding, as does every businessman who wants to curry favor across party lines. I daresay Trump would not open a checkbook for her these days, now that their relationship is political. This trope is trundled out by critics seeking to sow seeds of doubt as to Trump’s reliability on core values.

“He doesn’t have any core values.” Have you listened to the man? Here are ten off the bat: stronger borders, blasting political correctness, leveling the trade playing field, rebuilding the military, taking better care of veterans, protecting gun rights, creating jobs, speaking truth to global jihad, and the broadly stated but resonant “make America great again.”

Anyone is free to agree or disagree with those, but they have been recurring themes every day of his campaign. Doubters may claim that he might not follow through on all ten, but I’ll bet his batting average with those stated goals is better than the sorry job the Republican establishment has done following through on all of those things they said they would do if only we won the House, if only we won the Senate, if only, if only.

“He changes his views on the fly.” In general, this is not good. On important conservative economic points, if he has adopted one, he needs to stick to it. His reversal on a job-killing minimum wage increase was a total unforced error.

That said, he has stated often that he may adjust views as he becomes more familiar with various issues. While this annoys ideologues (like me), it may prove somewhat endearing to voters who sense he may listen as he learns the ropes of governance.

And on things like reticence to commit U.S. troops to the Middle East, I am hoping he adjusts that view right after his first security briefing the afternoon of January 20, 2017.

“He compliments Putin.” He sure does, in a certain oblique way, noting the Russian leader’s strength and devotion to his goals. For his part, Putin is eating it up, to the degree that he has thrown a compliment or two back Trump’s way.

This is not exactly “Mister Gorbachev, tear down this wall.”

But what it may be is a master deal-maker softening an adversary in preparation for a global chess match that might go better with an opening chapter of sweet-talk than it has of late with Obama’s empty rhetoric followed by inaction or worse.

It is true that Trump has zero experience dealing with foreign leaders. But he has a half-century of experience sizing up rivals and adversaries, using words and actions to lure them toward his agenda.

“He traffics in conspiracy theories.” This wholly accurate Trump criticism holds water, but dings him far less than those wielding it might wish.

His flirtations with such matters has ranged from the goofy (Rafael Cruz and Lee Harvey Oswald) to the inexcusable (Bush lied about WMDs to get us into war). But these moments seem to flit by without consequence, and the most recent one, the flight of Vince Foster nostalgia, was actually defused by the hyperventilations of overreaction.

As the voices of punditry gasped at his doubts on the official Foster story, millions old enough to remember 1993 thought: “Hmmm. The Clintons. The scandals. The various pressures of covering for them. Foster’s repeated frustrations with the Washington whirlwind. The decades of envelope-pushing by Bill and Hillary ever since. Know what? Maybe I’m not so sure what happened either.”

This is not lunacy, and it was not some egregious gaffe to invoke images of the earliest vestiges of Clinton skullduggery.

“He rooted for people to lose their homes in the recession’s housing collapse.” This is straight from the den of lies that is the Democrat party advertising brain trust.

They found audio of Trump in 2006, musing about how a drop in home prices could provide buying opportunities that could be of benefit to investors. The history of such logic dates to neanderthals hoping tiger pelts would dip in value to grease the wheels of commerce 30,000 years ago.

Yet Elizabeth Warren, who we learn has pocketed some cash from a house flip or two, lashed out against Trump’s cruelty for actively wishing for homeowners to lose everything. There are only two explanations for an attack this baseless: genuine stupidity and malicious intent. Let’s just say she is not stupid.

He clearly wishes to succeed at everything he does, so why would this not extend to running the country? This does not mean I will necessarily agree with his every instinct, but if he genuinely pursues the things he talks about with determination and seriousness, there will be far more positive results than negative.

In the end, I’d rather have a president interested in actually doing things that will make him look good, than the last seven and a half years of a president who does whatever he wants because he thinks he is already omniscient and omnipotent.

And if, at the end of his presidency, the country will have been truly benefited, Trump will enjoy the enormous benefit of an even loftier list of achievements, and we might enjoy the benefit of an America made, at least in some ways, great again.