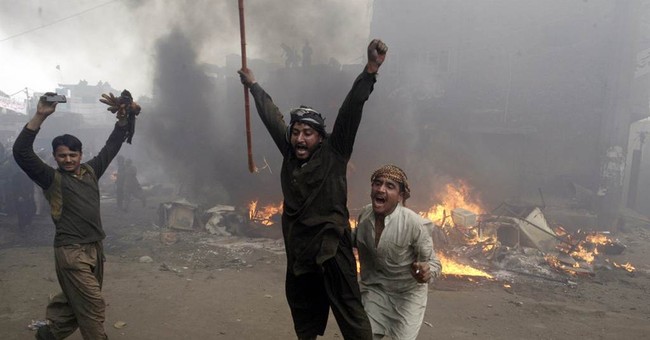 British pastor R.T. Kendall wrote a wonderfully insightful articlecautioning against the practice of ultimate name-dropping.  “How do we misuse God's name when we claim He told us something? With our intent. Most often we mention Him for one reason: to elevate our own credibility. It is not His name we are thinking of, it is our reputation. Adding the weight of God's name to our words gives us authority and respectability. But the truth is, we're not thinking of God's name and glory when we do this—we're thinking of our own.”

Therein lies the reveal for every zealous bully who ever justified wicked gratifications.  The Police Investigative Unit did not accept a religious sect’s explanation that “the child was the Antichrist” when they arrested four people, including the mother, of a 3-day-old girl who was burned alive in Santiago, Chile last month.  In 2008, a Texas jury convicted “prophet” Warren Jeffs of sexual assault in spite of his recorded explanation to a twelve-year-old, “Just don’t think about the pain; You’re going to Heaven…You shall learn the powers of the spirit of God as a heavenly wife should.”

And when we hear the shout of “Allahu Akbar,” no one anticipates that the action to follow is going to reflect the will of a majestic god.

In recent weeks, we have witnessed the truncated tibia of a Boston Marathon fan and the fresh blood of an off-duty British soldier flippantly displayed on the hands of his attacker.  With these recent brutalities, it seems that Western Society is finally done with the policy of stomaching the behavior of a religious sect that had been forgivingly considered to be simply uncivilized and gullible.

Western culture, having its foundation in Biblical principles, is naturally humble and slow to anger.  In response to decades of jihad against us (over 20 embassy attacks, the Iranian hostage crisis, several airline hijackings, the Achille Lauro cruise ship hijacking, 9/11 and 7/7), we tend to ask, “What did we do to make them hate us so deeply?”  I theorize that even the election of Barack Obama was a case of national Stockholm Syndrome.

The clash of the Western and Islamic cultures is not normalizing and there needs to be a long-term, systemic solution.  The problem lies between the 21st Century liberties of the West and the longing for the good old days of the 15th Century by many in Islam.  The two cultures are intertwined with the Islamic regions’ supply of its natural resources and the West’s supply of technology.  Add affordable travel, satellite broadcasts, and the Internet and you have an irreversible coexistence.

The American government model is a broadly distributed trust in the individual, especially in matters of faith.  Islam is faith enacted through a centralized government.

America’s third president, Thomas Jefferson, addressed the matter of state sponsored belief systems in his famous letter to the Danbury Baptists: “Believing with you that religion is a matter which lies solely between man and his God, that he owes account to none other for his faith or his worship, that the legislative powers of government reach actions only, and not opinions, I contemplate with sovereign reverence that act of the whole American people which declared that their legislature should ‘make no law respecting an establishment of religion, or prohibiting the free exercise thereof,’ thus building a wall of separation between church and State.  Adhering to this expression of the supreme will of the nation in behalf of the rights of conscience, I shall see with sincere satisfaction the progress of those sentiments which tend to restore to man all his natural rights, convinced he has no natural right in opposition to his social duties.”

Since, as Jefferson said, the American “powers of government reach actions only, and not opinions,” no consideration is given to religious motivations when it comes to the law.  It is perfectly legal to believe that human sacrifice, forced underage polygamy, and violent jihad are suitable behaviors.  However, it is illegal to act upon those beliefs in the United States.

The Big Island of Hawaii is the site of Luakini Heiau, a ceremonial structure that was used for worship and human sacrifice.  That practice has long been outlawed and is not tolerated in Hawaii’s participation as America’s newest state.  Law enforcement now keeps a close eye on the treatment of young women in theFundamentalist Church of Jesus Christ of Latter-Day Saintssince imprisoning twelve of its leaders, including Warren Jeffs, on convictions of sexual assault and polygamy.

And now I see Western society as finally fed up with losing children to radicalized zealots motivated by the ridiculous fantasy of guaranteed admittance to heavenly paradise and the promise of 72 virgin sex slaves.  Watch for Americans to begin taking on this threat like they did with smallpox, cigarette addiction, pit bull terriers and drunk driving.  The political correctness of sparing Muslims’ sensibilities will take a back seat to protecting our loved ones and our liberties.

Of course the majority of Muslims are normal, peaceful, wonderful folks.  American and British soldiers have fought to protect millions of our Muslim friends in their countries against the violence of their radical cousins.  But we do not see similar outrage by these friends of ours to the violence committed against our families in our homes.  So we must solve the matter by reasonably putting our own interests before their sensitivities.

America asserted herself in three notable cases after the aggressions of Germany, Japan, and the Soviet Union exceeded a particular threshold of tolerance.  I believe that we are there again.  Islam must embrace humility in the world or the world will humble Islam.