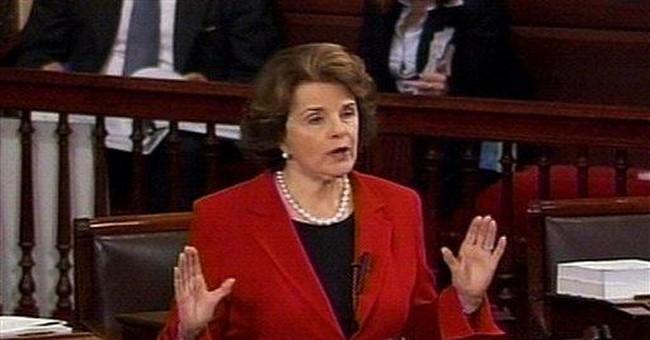 Sen. Dianne Feinstein (D-California) shocked extreme left-wing liberal groups three months ago when she “broke ranks” to send Judge Leslie H. Southwick, President Bush’s nominee to the U.S. Court of Appeals for the Fifth Circuit, for a full Senate vote with a favorable recommendation. But no one should have been surprised.

So it is not at all surprising for anyone to support a nominee with such an impeccable record. In fact, most people would admire and respect someone that has served our country so honorably.

What is surprising is that anyone would oppose this nominee. And Sen. Feinstein’s fair mindedness in this instance actually highlights the extreme position and severely flawed reasoning of those who oppose Judge Southwick and shows their motives to be less than honorable. Using century-old stereotypes that the American people have tried so hard to eradicate, some senators have made false and damaging accusations to placate extreme left-wing special interest groups, regardless of the truth and the damage they do to the reputation of this American hero and his family. In her statement supporting Judge Southwick, Sen. Feinstein told her colleagues:

“I think what sometimes gets lost in our debates about judicial nominees is that they are not just a collection of prior writings or prior judicial opinions. They are, first and foremost, people. And in my conversations with Judge Southwick, I have gotten a sense of what kind of person he is, and the kind of appellate judge that I believe he will be, given that opportunity. …

“I truly believe that the concerns outlined about Judge Southwick are outweighed by his record of service to the country, by the many cases that he sat on, by his long experience as an appellate judge, and by the temperament that I have come to know from my discussions with him.”

Looking objectively at the evidence, Sen. Feinstein reached the same conclusion that any reasonable person could reach and voted favorably with the nine Republicans on the Judiciary Committee to pass Judge Southwick for a vote in the Senate.

And she will not be alone in the full Senate. Judge Southwick is expected to enjoy wide support from a majority of senators when he actually gets a vote. For example, Sen. Ben Nelson (D-Nebraska) said that he will also vote to confirm Southwick. The problem lies with those few extremely liberal senators who don’t care about the truth or fair play but would rather obstruct the process to gain support from extreme left-wing liberal groups.

Sadly, these senators are all on the Democratic side of the aisle — again. Though there are some who are acting as mere pawns, following whatever orders come from the Democratic leadership, others are intentionally misleading without realizing the damage they are doing to their party and the country.

Realizing Judge Southwick has the support necessary to win the vote in the Senate, these senators are, once again, obstructing the Senate calendar so that the constitutional process cannot take place. Though a hearing on Judge Southwick is expected this week, Senate Majority Leader Sen. Harry Reid (D-Nevada) has in the past deliberately ignored his promise to bring Judge Southwick for a vote. And, to add insult to injury, he actually brought another nominee to the Fifth Circuit for a vote recently.

Confirmed on October 4, Judge Jennifer Walker Elrod is a fine nominee, and we desperately needed her to be confirmed, but Sen. Reid’s actions further confirm that fairness has nothing to do with the way he conducts business in the Senate. Judge Elrod’s nomination was received on March 29, 2007, compared to Judge Southwick who was nominated January 9, 2007. Judge Elrod’s seat had been vacant for 413 days, which is still a judicial emergency but can’t be compared with Judge Southwick’s seat, which has been pending for 1,048 days.

Sen. Feinstein certainly knew this: “There is also the fact that he is nominated to a seat that has been vacant for seven of the past eight years… The Administrative Office of the Courts has designated this seat as a ‘judicial emergency.’ And Judge Southwick is the third nominee to this seat.” Still, Sen. Reid chooses to insult Judge Southwick and our intelligence by ignoring the facts.

Obstructionist senators should learn something from Sen. Feinstein and stop making a mockery of the Constitution. “We the people” want fairness in the judicial confirmation process. We will remember those senators who are more concern with appeasing special interest groups than with doing the honorable and right thing. No longer should they get away with hiding behind a “no” vote to cover their political games.

If a senator does not like Judge Southwick for some inexplicable reason, he can vote “no” on his confirmation, but he should vote! The Constitution must be followed; the Senate must “Advise and Consent.” And if they don’t know what this means, maybe they should ask Sen. Feinstein.