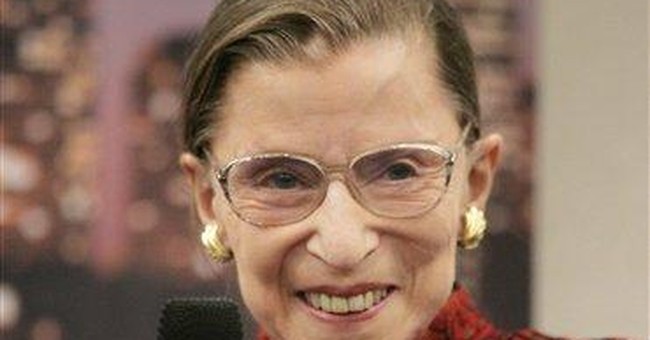 At the beginning of her dissent in the recent Partial Birth Abortion (PBA) case, Gonzalez v. Carhart, Justice Ginsburg, joined by Justices Stevens, Souter and Breyer, called the majority's decision "alarming." Though there is nothing legally alarming about this decision, Justice Ginsburg and other abortion advocates' feelings were deeply hurt by what they consider an intrusion on their rights.

Yes, this decision is an intrusion on the tight grip they've had on abortion jurisprudence in America. In the past, abortionists enjoyed an unprecedented level of respect, security and even admiration that the country's highest Court did not show this time. To them, this is not fair, even if the decision is legally sound. For years they had been the only ones heard on the issue of abortion, but this time the Court had the audacity to listen to both sides. The Dissent cannot believe this and is appalled that the Court would even listen to doctors that do not perform partial birth abortions. Justice Ginsburg quotes the lower court to express her indignation:

[N]one of the six physicians who testified before Congress had ever performed an intact D&E. Several did not provide abortion services at all...

You see, according to Justice Ginsburg and abortion advocates, a doctor should be ignored on this issue if he or she does not provide abortion services. That means that the Court should listen to condemnation of the PBA procedure only if voiced by someone who performs it. Put another way, since no abortion-performing doctor calls the procedure gruesome, then the procedure must not be gruesome. Never mind that hundreds of doctors do not perform the procedure because it is gruesome. That's not the point. Justice Kennedy, writing for the Majority, addresses this point brilliantly:

The law need not give abortion doctors unfettered choice in the course of their medical practice, nor should it elevate their status above other physicians in the medical community (emphasis added).

The Majority also acknowledge that in the past the Court has made special accommodations within its own interpretative rules when it comes to the issue of abortion. Talking about the canon of constitutional avoidance, a rule that encourages every reasonable construction to be resorted to in order to avoid unconstitutionality, Justice Kennedy wrote:

It is true this longstanding maxim of statutory interpretation has, in the past, fallen by the wayside when the Court confronted a statute regulating abortion. The Court at times employed an antagonistic 'canon of construction under which in cases involving abortion, a permissible reading of a statute [was] to be avoided at all costs.'

That has been the modus operandi of our courts when it comes to abortion cases since Roe v. Wade. Good medical doctors ignored, rules of judicial review slightly modified, the United States Constitution "revised" (as part of its natural "living, breathing" development), and the concerns of the majority of women overshadowed by the desires of a few.

In this decision the Court took a small step toward respecting the written text of the Constitution, recognizing the humanity of the unborn and addressing the concerns of all women. The Court said:

It is self-evident that a mother who comes to regret her choice to abort must struggle with grief more anguished and sorrow more profound when she learns, only after the event, what she once did not know: that she allowed a doctor to pierce the skull and vacuum the fast-developing brain of her unborn child. ..."

Again, the Court considers all sides: the women, like Justice Ginsburg, who demand abortions as a tool for "freedom" and "equality;" the women who believe that abortion should never happen because it preys on the innocent; and also the women who regret their abortions and grieve for their unborn children.

Naturally, the other side is offended by this language. Calling whatever is inside of the woman when all but the head is outside the womb an unborn child, or even worse a baby! Calling a doctor who performs abortions an abortionist! This is absurd and disrespectful according to the Dissent. Here is what they said:

The Court's hostility to the right Roe and Casey secured is not concealed. Throughout, the opinion refers to obstetrician-gynecologists and surgeons who perform abortions not by the titles of their medical specialties, but by the pejorative label "abortion doctor..." A fetus is described as an "unborn child," and as a "baby..." and the reasoned medical judgments of highly trained doctors are dismissed as "preferences" motivated by "mere convenience..."

Why the term "abortion doctor" would be considered a "pejorative label" by those who consider this so noble a practice as guarding this, the most fundamental of constitutional rights for women, is not really clear, but it is just wrong. Before they were praised as valiant defenders of women, and now they are being called abortionists.

But all is not lost; the Dissent takes refuge in three main areas. One, they make sure that the other side knows that all their efforts are fruitless. Justice Ginsburg tries to accomplish this by repeating the idea that, "[t]he law saves not a single fetus from destruction, for it targets only a method of performing abortions." So there!

Second, they believe that a door has been left opened by the Court for a new challenge:

If there is anything at all redemptive to be said of today's opinion, it is that the Court is not willing to foreclose entirely a constitutional challenge to the Act. 'The Act is open,' the Court states, 'to proper as-applied challenge in a discrete case.'

So Justice Ginsburg has issued a call to arms, inviting more challenges in order to strike this horrible law:

One may anticipate that such a preenforcement challenge will be mounted swiftly, to ward off serious, sometimes irremediable harm, to women whose health would be endangered by the intact D&E prohibition.

And that leads us to their third and final hope. If a new challenge to this law arises, this current ruling should be overturned. Yes, we all know that stare decisis is one of the most important things to abortionists everywhere. At one point the Dissent said "the Court dishonors our precedent." They also wrote:

As the Court wrote in Casey, 'overruling Roe's central holding would not only reach an unjustifiable result under principles of stare decisis, but would seriously weaken the Court's capacity to exercise the judicial power and to function as the Supreme Court of a Nation dedicated to the rule of law.'

'[T]he very concept of the rule of law underlying our own Constitution requires such continuity over time that a respect for precedent is, by definition, indispensable."

But that was then and this is now. This decision should not be one of those that we respect and follow in the future. It goes against what they believe. So they write, "A decision so at odds with our jurisprudence should not have staying power." Besides, we all know that Roe is "super-duper" precedent.