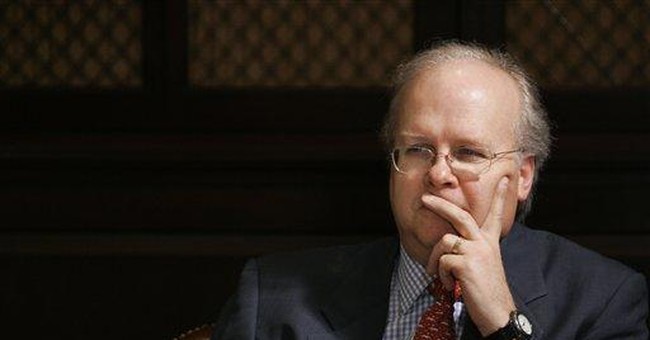 Back in the day when W’s poll numbers were through the roof there was much talk of a Republican realignment by the president’s chief political adviser and confidant Karl Rove.

Rove waxed poetic about creating a lasting Republican majority. During those heady times Rove told anyone within earshot that his role model in this endeavor was the legendary political boss Mark Hanna who was primarily responsible for the political career of William McKinley.

Hanna helped elect McKinley to the governors mansion in Ohio and then to the Presidency in 1896.

During the race of 1896 it is said Hanna ran a hardball campaign for his principal McKinley and for the time raised an unprecedented amount of money.

When Bush was re-elected, Bush hailed Rove as the "the architect" Rove was in effect "Hanna" reborn.

George W was being compared to Reagan and the there was talk of spending political capital and reforming social security.

The fact is that many conservatives who are not inside the "beltway" had concerns about the Bush/ Rove agenda from virtually day one.

First and foremost as a concern was that any private public policy disagreement within the family was seen as disloyalty to the administration.

And in fact those who disagreed were summarily shut out, or not granted access to the White House.

Many conservatives also were alarmed when Bush and Rove went on their big government expansion spree by siding with Ted Kennedy on “No Child Left Behind” and the arm twisting that went on by Tom Delay the President’s water carrier for big government in the House by the passage of the Prescription Drug bill arguably the largest expansion of government since the New Deal.

Seeing an a mandate with 51% of the vote Bush and Rove rolled the dice and spent their political capital by making reform of social security their “signature issue” for the start of the President’s second term.

At the time many conservatives questioned the sequencing of the president’s legislative agenda and would have preferred that the Bush administration lead with making the tax cuts permanent.

After all, Republicans were in the majority and making the tax cuts permanent seemed much more doable to many of us than taking on social security the third rail of American politics and one that is near and dear to the true believers in the Democratic party.

Less than a year into Bush's second term, the President's approval rating was down around 40 percent.

To hold on to power it was thought that earmarks and largesse were key.

Coupled with an unpopular and mismanaged war, the inability of Bush and Congress to secure our southern border, the ineptness of the response Hurricane Katrina, the Jack Abramoff and the Mark Foley scandals the stage was set for a disastrous 2006 election.

The result was predictable.

Republicans lost the House that “Newt Built” in 1994 as well as the Senate.

Ironically, despite the fact that the least popular programs of the administration are anything but conservative, George W. Bush has replaced Ronald Reagan, as the face of conservatism.

Now in June of 07 President Bush’s approval rating hovers in the low 30’s and the party is torn apart by the disconnect between the Washington elites and the grassroots over illegal immigration.

Bush accused conservatives of “not wanting to do what’s right for America" when it comes to illegal immigration.”

Conservatives would argue that a novel idea might be to follow the rule of law and enforce the laws that are currently on the books, particularly during a time of War.

What is clear is that the conservative movement and the Republican Party are in a rebuilding phase.

The "Center Right" Republican majority forged by Reagan and Gingrich has been squandered by Rove's realignment pipe dream that was based on the premise of big government for the sake of power.

The damage to the country, the conservative movement and the Republican Party may take years if not decades to repair.

Wait, That's How the FBI Labeled the Attempted Assassination of Republicans on a Baseball Field?
Katie Pavlich
Is Lisa Murkowski Going to Run Again? She Better Not After Her Latest Vote
Matt Vespa
This Is Why It's Important to Correct the Liberal Media On Officer Sicknick's Death. It's Not Hard.
Matt Vespa
Priorities: Amid Growing Crisis, Biden Administration Moves to Banish Terms Like 'Illegal Alien'

FL Sheriff Has Some Advice for the 'Millions' of People Moving to the State on How to Vote
Townhall
LeBron James' 'you're next' tweet about officer who shot Ma’Khia Bryant got deleted (but here it is)
Twitchy
Joe Biden Releases an Absolutely Disgusting Statement on the Columbus Police Shooting
Redstate
Insanity Wrap #191: Did Jury Intimidation Play a Part in the Chauvin Verdict?
PJ Media