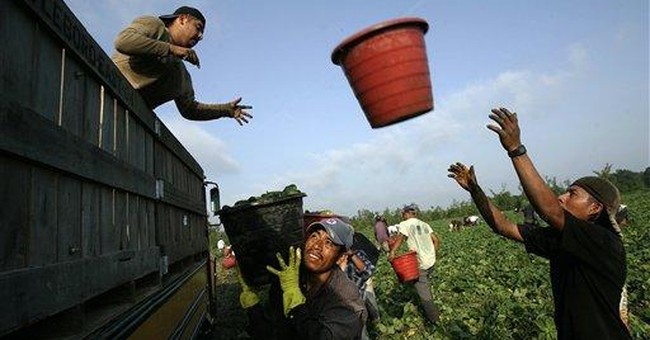 Last week Senator Elizabeth Dole successfully helped scuttle the so called grand bargain immigration reform bill that would have given amnesty to over 12 to 20 million million illegal immigrants -- while doing virtually nothing to secure our borders.

Backed by President Bush, who is looking to enhance his legacy, Ted Kennedy and Senator John Kyl -- this bill was accurately described by former NY City Mayor Rudy Giuliani as mess.

The last straw for consevatives was when Bush attacked his own conservative base for a lack of patriotism.
If you don't want to do what's right for America," he said of opponents of the Bush-Kennedy immigration bill, "if you want to scare the American people, what you say is the bill's an amnesty bill. That's empty political rhetoric, trying to frighten our citizens."

But if the 12 million to 20 million illegal aliens are instantly legalized, what other phrase describes that other than amnesty?

The Heritage Foundation made the following points:
Congress should set aside this "grand bargain" and begin a new the serious work of crafting sensible immigration reforms that will:

- enhance rather than compromise national security,
- affirm rather than undermine rule of law,
- facilitate economic growth in a fiscally responsible fashion,
- create a temporary worker program that is balanced, market driven and enforceable, and
- Enrich the fabric of our culture while truly uniting us as a people.

Senator Dole understood, as did many conservatives out side of Washington DC, that none of the above would be accomplished by passing the so called grand bargain.

In an interview with the Raleigh News and Observer, Dole said, "My view overall on all this is: What people want, and what we've heard from thousands of people, is they don't have any confidence right now with regard to securing the borders."

Dole continued stating, "The rush shouldn't be to legalize 12 million people; the rush should be to do everything in our power to show the borders have been secured," she said. "Rush to do that. Rush to secure communities."

The Senator was right on target.

Dole first tried to make improvements to the bill, but after essentially being road blocked Mrs. Dole changed tactics: Basically the bill comes down, she said.

Dole was pressured by the GOP leadership and the backers of the immigration reform measure not to make a move, but she changed her vote anyway. This was act of political courage that North Carolinians have not witnessed since former Senator Helms stood firm against the Panama Canal Treaty.

Conservatives must realize that that President Bush and the leadership of the Democratic party view last weeks defeat as a temporary set back and in fact will make one more try at passing this flawed bill.

For those of us in the conservative movement, the rejection of the immigration bill opens a chance for real reform reform that respects the will of many of us, and also protects the economic and national security of the American people.

Conservatives should insist that in order to fix this broken system, several things must be accomplished:

First and formeost, we must stop new illegal immigrants from entering the country by funding and building the 700 miles of wall autorized by Congress and signed into law last year by President Bush.

Second, entice existing illegals to return home by eliminating welfare payments and other sevices to illegals. Illegal immigrants come to the U.S. to work. If we make it more difficult for them to find work, substantially fewer of them will come, and many of those already here will return home. It also shows the respect richly deserved to all imigrants who follow the rule of law and come here legally. In doing so they show us they want to be a part of the American work force and will gladly obey our countrys laws and live by the rules which govern us all.

Also, we should make it less attactive to all employers to hire illegals by fining them for doing so. Illegal immigration is not some sort of uncontrollable force of nature. It can and should be regulated. My great grandparents came thru Ellis Island -- legaly. They learned to speak English, learned American history and became produtive citizens. The rule of law and the our borders must be respected by those who would come here. Period.