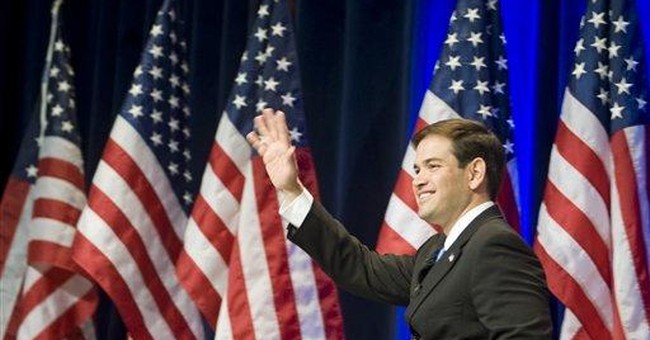 He came, we saw, he conquered.

I met Marco Rubio in Naples, Fla., this weekend, where he gave the keynote speech at the Council for National Policy.

Never fall in love with a political candidate, I tell myself; they will break your heart. Besides, expecting more than one Reagan in a lifetime is just plain greedy. Not to mention stupid.

And then I heard Rubio in Naples, and what can I say? I fell in love.

And it's not just me.

Rubio and Brown differ in their politics, but they share a rare capacity to make even the most cynical GOP voter want to believe again. Certain ideas and ideals really are timeless, which means: capable of being reborn in each new generation.

When Rubio speaks, he is not spinning -- he is weaving together from his life story, in his person as well as his words, the frayed threads of the old Reagan coalition. The greatest generation's triumph over the evil communist empire lives again via Rubio's life, which includes a family that escaped from Cuba to America. Rubio's America is a place where the son of a Kmart clerk could graduate from law school (with $115,000 in outstanding student loan debts to prove it!). He understands economics in deeply moral terms -- as the need to sustain an America where no one places limits on what you can accomplish because of your skin color, your parents' occupation, your so-called place in society. And although it has been little noted, Rubio skillfully weaves in the third leg of Reaganism as well, arguing that you cannot separate the economic well-being of a people from their social and moral well-being. He is unapologetically pro-life and pro-marriage.

While Rubio and I were chatting, Public Policy Polling was speaking with Florida GOP primary voters, who delivered what the pollster called brutal news for Gov. Charlie Crist: They want Marco, too.

In the latest poll, Rubio, who started out 30 points behind, now leads Crist 60 percent to 28 percent among likely GOP primary voters.

And it's not just Republican primary voters. A Feb. 18 Rasmussen poll shows that Rubio is leading Rep. Kendrick Meek (the likely Democratic nominee) by 20 points -- that is by an even larger margin than Crist's 16-point edge.

Poor Charlie. Seeing him try to play the regular guy card against Rubio is, well, painful to wax, er, watch.

During an interview with Greta Van Susteren, Crist accused Rubio of charging a "$130 haircut -- or maybe it was a back wax. We are not sure what all he got at that place " to a party credit card. The weird thing is that Crist then pretended not to know about such things. "I get my haircut for $11 from a guy named Carl the Barber in St. Petersburg, Fla., where I grew up. And to me that's real fiscal conservatism."

To some folks, fiscal conservatism is not snuffling up to the federal trough, embracing and defending an $800 billion stimulus bill on the grounds that Charlie claimed: It "created or saved 87,000 jobs."

With $5 million in the bank and down 2-1, expect a torrent of attack ads from Crist, who while promising not to go negative, has already called Rubio "the greatest fraud perpetrated" for charging a $130 haircut and for having accumulated so little wealth in his short life. (A young married man with four kids, until recently an elected state politician -- Rubio must be an honest man to have so little in the bank right now, I suspect most voters will think).

I don't know what dirt he has on Rubio -- or thinks he has -- but, Charlie, I'm telling you: Don't kill our dream. The political blood on the floor will be yours.

(Maggie Gallagher is president of the National Organization for Marriage and has been a syndicated columnist for 14 years.)