About That New Abstinence Study 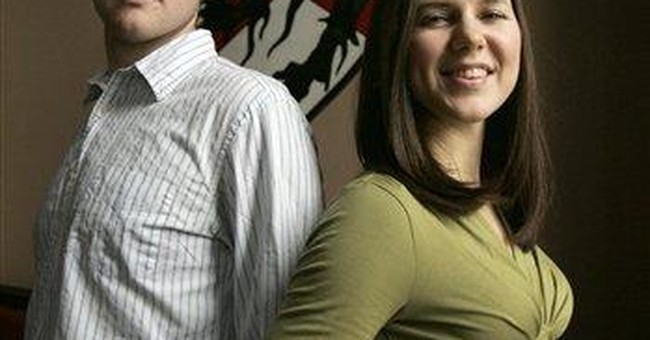 Somebody up there has a wicked sense of humor.

How else do you explain the release this week of a new study by John B. Jemmott III proving that an abstinence-only education program works?

"After more than a decade of progress, this reversal is deeply troubling," intoned Heather Boonstra, the institute's senior public policy associate. "It coincides with an increase in rigid abstinence-only-until-marriage programs, which received major funding boosts under the Bush administration. ... Fortunately, the heyday of this failed experiment has come to an end," and new federal rules ensure that programs will be "based on research demonstrating their effectiveness."
CARTOONS | Bob Gorrell
View Cartoon

Less scientifically credentialed voices spoke more like Scripps Howard columnist Bonnie Erbe: "A new study should silence members of the religious right who continue to support the nonexistent efficacy of abstinence-only sex education. ... Nothing silences zealots, least of all truth or the facts."

So the release of this new study in the Archives of Pediatric and Adolescent Medicine this week is weirdly timely.

What about that new abstinence study?

Well, it's just the gold standard for intervention research, a bright and shining pinnacle of research design that social science seldom ever reaches: random assignment. In this case 662 black sixth- and seventh-graders in low-income communities were assigned to one of four interventions, plus a control group: abstinence-only education, contraceptive "safer sex" education, two different comprehensive-education programs, plus a control group of kids who received general health education. Even the teachers were randomly assigned to one of the five groups.

The main conclusion of this rigorous clinical trial? "The abstinence-only intervention compared with the health-promotion control intervention reduced by about 33 percent the percentage of students who ever reported having sexual intercourse by the time of the 24-month follow-up, controlling for grade, age and intervention-maintenance condition."

Wow. Any negative side effects? Are the kids less likely to use condoms? Nope. The authors report that "a randomized controlled trial and a literature review found no effects of abstinence interventions on condom use. Similarly, in this trial the abstinence-only intervention participants did not differ in self-reported consistent condom use compared with the control group."

How about the contraceptive "safer sex" education program? Did teaching the kids to use condoms make them more likely to use condoms? Remarkably, no. The kids in the control group were just as likely to use condoms as kids given safer-sex education. Well, then, did the comprehensive "abstinence plus" approach do better at increasing condom use, compared to doing nothing? No, it did not either delay sex or increase condom use, either. The abstinence-only approach, in this one rigorous study, was the only one that "worked."

I know this is only one study, no matter how high quality. Can it be replicated? Do other abstinence-only approaches work equally well? Do they work with older teens or middle-class teens? Would similar clinical trials support the efficacy of some other types of abstinence-plus programs? There is much to be learned.

But recall that the Guttmacher Institute required no real study at all to claim (and get widely reported as "fact") that abstinence-only education was causing the increase in teen pregnancy rates.

Yet in 2008, according to a Health and Human Services funding analysis requested by Rep. Mark Souder, R-Ind., the federal government spent just $177 million on abstinence education compared to $609 million on contraceptive-based sex education.

Are progressives like Carolyn Maloney going to call for an end to safer-sex education now? Will the Guttmacher Institute retract its attack? Will President Obama step forward to restore abstinence-only funding?

We will learn something about the alleged commitment of people like this to science from their response to this new research.