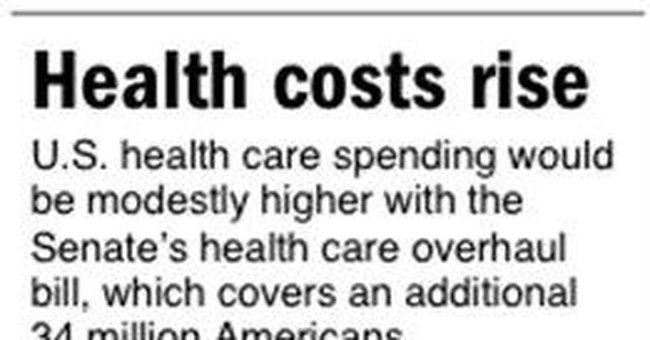 It's the oddest political dynamic I've ever seen.

Every day, Americans learn more things to hate about this health care plan.

According to Martin Vaughn, writing in The Wall Street Journal, an unmarried couple making $25,000 each will have to pay between $1,500 to $2,000 more if they decide to marry.

Why do the Democrats want to tax marriage? It makes no sense at all. When the Democrats scrapped the "botax" for a tanning bed tax, they argued that tanning is harmful to people's health. So why penalize marriage, which is good for the health of men, women and, especially, newborn babies? By discouraging marriage, even at the margin, this bill will help weaken marriage in the middle and working classes, while encouraging illegitimacy and divorce -- all of which will cost taxpayers much more money and hurt our health, as well.

Most recently, there's the baby nurse brigade: almost a billion dollars a year in order to visit new moms in the home, which President Obama promises (based on a small pilot project in Elmira, N.Y.) will actually improve health and save money. Sound familiar?

Democrats appear to be living in a fantasy world that this bad bill is going to make them beloved once Americans get to live under it. Right. Young people are really going to enjoy getting taxed for health insurance policies they didn't want enough to buy on their own. The majority of us are going to face rising health insurance premiums and we will blame the people who passed this bill, whether it's their fault or not.

Have Democrats in Congress learned nothing from Obama's stimulus package? If you spend a billion to fix a problem, you've bought the problem. President Obama can no longer blame Bush or the Republicans because he promised that if Congress gave him a billion he would fix the problem. Now it's not fixed. So the problem is now Obama's, not Bush's.

Similarly, right now, Americans do not blame Democrats for what they don't like about our health care system. But what happens if the health care costs continue to rise, access for Medicare and Medicaid patients continues to dwindle, health insurance remains a bureaucratic nightmare, and government intrudes on individuals with new taxes on everything from tanning to marriage? Whether or not the ongoing problems in health care were caused by the plan, the American people will henceforth hold the Democrats who voted for this bill -- over the people's objections -- responsible.

Blanche Lincoln, Ben Nelson, Harry Reid and Co., be forewarned: You vote to spend a trillion dollars on a problem like health care, you've bought it. Everything we Americans do not like about health care from now on will be your fault, and voters will hold you accountable.