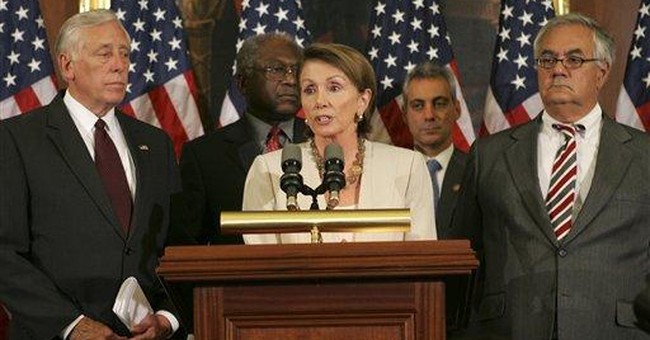 We have a financial crisis that threatens our economy -- that's clear. But what's preoccupying me and a lot of Americans today is that the events of the past few days also have revealed a political crisis of confidence we face that may be even more dire and longer-lasting.

On Monday we lost wealth equivalent to the entire economy of India -- in one day. A nearly 10 percent drop in the S&P 500's value.

Our real economic problem is not in the stock market, which is functioning. It's on the credit side, where the problem is not that the credit market is in danger of falling (it's gotta do that) but of ceasing to exist for a sustained period.

People who can't sell bonds and other credit instruments don't know what they are worth. Things that you can't sell have an immediate real value of "zero," even if their actual value -- in a sane market that's working -- would be considerably higher.

Amid all this mounting uncertainty, one thing has become crystal clear: Our political class stinks.

We face a crisis of almost unprecedented magnitude -- a potential Great Depression that threatens the well-being of millions of Americans. And what do our politicians do?

Well, they display all the traits of Narcissistic Personality Disorder, a serious psychiatric condition that is characterized by (a) a need for attention and adulation and a grandiose sense of one's own importance that results in (b) manipulative and exploitative behavior toward others including (c) a tendency to demean and criticize anyone who disagrees with them and (d) a marked tendency to shift blame and responsibility for one's own behavior onto others.

Nancy Pelosi has got to be one of the weakest and most passive-aggressive House speakers in history. How else to explain that on a must-win issue for the nation, almost 40 percent of Pelosi's own Democrats voted against the "bailout" bill? Why did Speaker Pelosi used her minute on Monday during this national crisis to make it clear she intended to use the crisis to kill as many Republicans as possible: "Seven hundred billion dollars -- a staggering number but only a part of the cost of the failed Bush economic policies to our country."

A few days of rising above politics to get the deal done in the nation's interest -- is that too much to ask a speaker of the House?

But John McCain's behavior was, in my humble opinion, even worse -- insulting to the intelligence of the American people. For example, in a Sept. 26 press release McCain said:

"Both parties in both houses of Congress and the administration needed to come together to find a solution that would deserve the trust of the American people. ...

"The difference between Barack Obama and John McCain was apparent during the White House meeting yesterday where Barack Obama's priority was political posturing in his opening monologue defending the package as it stands. John McCain listened to all sides so he could help focus the debate on finding a bipartisan resolution that is in the interest of taxpayers and homeowners."

This is insane. Worse, it's disgusting. Does John McCain (or his handlers) think we have no ears? That we won't notice his nasty partisan jabbing while posing as a leader above the fray?