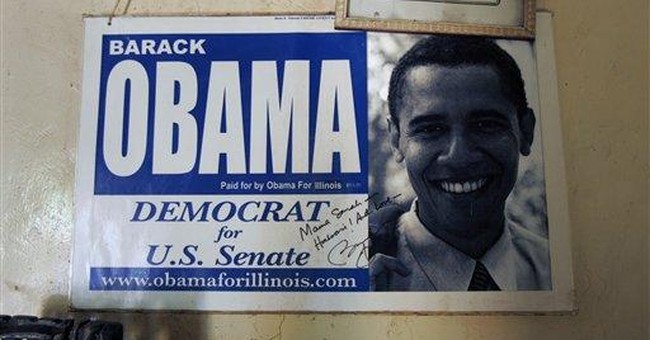 The irony about Barack Obama is that he's the man of Hillary Clinton's dreams.

Watching the New Hampshire college students pour out to vote for Obama, I kept picturing the young Miss Rodham delivering her cri de couer at Wellesley's commencement, way back in 1969: "We're searching for more immediate, ecstatic and penetrating modes of living," a way to live "in relation to one another in the full poetry of existence."

Forty years later, Hillary is a programmed caricature of herself, cautiously delivering the latest poll-tested message.

And the full poetry of existence is represented by the man who late polls show trouncing her in New Hampshire. Barack Obama is the man of the hard left who has turned his whole campaign into an act of poetry, a symbol of unspecified and probably unspecifiable transcendent yearnings. We need symbols to express things we cannot say in plain prose.

If Republicans got themselves elected in part by rallying to defend important cultural symbols (the flag, the Ten Commandments, marriage), Obama's candidacy is a totally new, postmodern kind, where he has elevated his own candidacy to the status of a symbol: He is the incarnation, the aspiration, "the one."

I find it creepy, of course, and so do a lot of us aging baby boomers, right and left, who've heard politicians promise to deliver change, time and time again. But then, occasionally, like Ronald Reagan, they do succeed.

Will Barack Obama prove to be the left's Ronald Reagan?

The most unreported story of the election so far is the collapse of the Giuliani campaign. How did it happen that the supposed electoral powerhouse, Rudy Giuliani, cannot even contend in New Hampshire -- in his own Northeastern backyard, and exactly the kind of non-Southern, non-Evangelical state that Rudy is supposed to win?

With his poll numbers tanking, Rudy retreated, and tried to turn his defeat into an "innovative" electoral strategy: lose early and often. Then pretend it's part of a plan. The truth is that Rudy, competing for the same voters, got trounced by McCain. Before withdrawing from New Hampshire, Rudy spent $3 million in ads that failed to move voters. Why?

Rudy made the same fundamental error that Hillary did: He tried to run as an incumbent. Hillary's word is "experience"; Rudy's campaign gurus picked "tested." Listening to either candidate use their word only reminds me -- and I suspect voters -- of all the focus grouping that went into putting words in his or her mouth.

Not only are voters hungry for change, but Rudy is not, in fact, an incumbent president. So every time he tried to draw out this "tested" campaign message, he ends up talking about things he did a decade ago, on issues that are no longer very important to voters, such as crime and welfare reform. Rudy did a magnificent job as mayor of New York City, but voters aren't interested in the past. And when Rudy talks about the future, he sounds like President Bush on steroids: war, terror, war, terror, aggression.

Candidates like Rudy do well when voters are scared of thugs or bombs in the street. That's when you need a tough-talking, big man to take on the bad guys. But here, as in those other issues, conservatives are victims of their own success: We beat communism; we haven't had a major terror attack in six years.

And folks are tired of feeling scared all the time.

They want to feel good again about our country and its institutions.