Should Illegals Get Driver's Licenses? 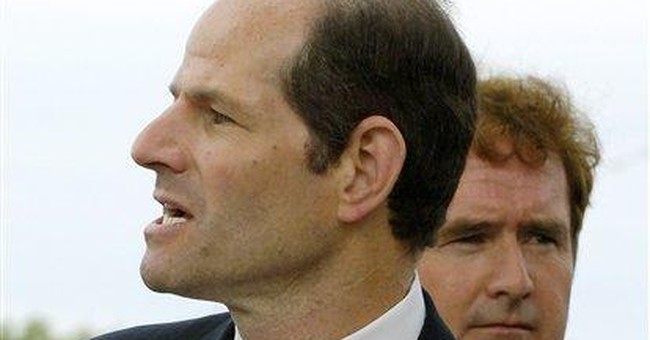 Ideologically, he's a liberal. But he's one tough SOB of a liberal, which means he has considerable crossover appeal, especially to blue-collar white men -- a demographic the Dems normally hemorrhage.

Gov. Spitzer fits Harvard professor Harvey Mansfield's definition of manliness with "confidence in a situation of risk." So why is Eliot Spitzer, his popularity nose-diving, plowing ahead with plans to offer driver's licenses to illegal immigrants?

Already, as of Sept. 24, under Spitzer's orders, the state's Department of Motor Vehicles has ceased stamping legal visitors' licenses with the word "temporary." By April 2008, even illegal immigrants will be able to walk into the DMV with a foreign passport and emerge with a driver's license indistinguishable from yours or mine.

The outcry from New Yorkers has been instantaneous and negative.

The New York State Association of County Clerks voted 30-3 to oppose Spitzer's plan, and so have at least 12 county legislatures. "License issue driving debate in races statewide," runs the headline in one local newspaper. An Erie County clerk candidate's TV ads promise: "I'll stop illegal aliens from getting driver's licenses, even if I have to go to jail to protect you."

But will the governor's plan play in Poughkeepsie? Dutchess County this week became the latest county legislature to vote against the plan. During the debate, Democrats who supported Gov. Spitzer accused opponents of bigotry: "This is racism, pure and simple," said Democratic legislator Joel Tyner, according to local press accounts. Democratic legislator Fred Bunnell equated that using the word "illegal" to describe undocumented immigrants was the moral equivalent of using the "n" word.

Gov. Spitzer also responds (much as another manly man, President Bush, did under similar circumstances) to public criticism by attacking his electorate:

"What has happened is that the politics of fear and selfishness has replaced the politics of common sense and responsibility," Spitzer said at Fordham University, according to the Niagara Gazette. "We are witnessing knee-jerk reactions to sound policies that have no business being politicized or polluted by fear-mongering rhetoric."

Both he and state Democratic Party Chairwoman June O'Neill have proudly said that the governor doesn't govern by polls. "He does what he thinks is the right thing to do," O'Neill said.

President Bush tried that one, too. To voters it sounds a lot like: "I don't care what you think."

"The voters' message to the Governor is clear: 'No, no, no,'" said Steven Greenberg, Siena New York poll spokesman. Fifty-five percent of New Yorkers now give Spitzer a negative job rating.

So why are New York Democrats backing the governor up?

Republicans in the state legislature have begun to voice fears that there is method to this madness: Perhaps the plan is to get more illegal immigrants to the polls? Democrats have pooh-poohed these fears, saying driver's licenses are not proof of citizenship.

But a quick trip to the New York State Board of Elections Web site gives potential voters the following identification requirements for voter registration:

"Your identity must be verified prior to election day, so that you will not have to provide identification when you vote. Your identity can be verified through your DMV number (driver's license number or nondriver ID number), or the last four digits of your social security number.

"If your identity is not verified before election day, you will be asked to provide identification when you vote for the first time. Samples of the identification you may provide include a valid photo ID, a current utility bill, bank statement, government check or some other government document that shows your name and address."

So is Spitzer mad or just manly?

As Rudyard Kipling put it, "If you can keep your head when all about you are losing theirs and blaming it on you, if you can trust yourself when all men doubt you ... you'll be a Man, my son!"

"Right, or maybe you just don't know what the hell is going on," a friend of mine suggested.