The men on the moon 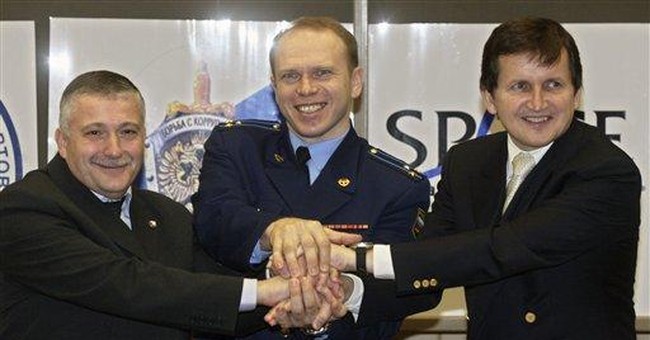 Fifty years ago this week, the Space Age began.

The Russians launched it, sending "Sputnik" and the Cold War into orbit on Oct. 4, 1957. I celebrated by seeing "In the Shadow of the Moon," the moving new documentary about the United States' race to put the first man on the moon.

Only 12 men have ever escaped Earth to walk on another heavenly body. All of them are Americans; all are men born on or about the same year as my father, 1930. In a few years, they will be gone from us.

Their story is also the story of the America of my childhood -- about a charismatic young president who set an arbitrary, remarkable, daring goal in 1961 "of landing a man on the moon, and returning him safely to Earth" by the end of that decade, and the nation with a can-do spirit that made it happen.

It was done for no particular reason, it seems, other than to prove that we could. "We go into space because whatever mankind must undertake, free men must fully share," President John F. Kennedy told Congress.

(Oh, do you remember when even liberal Democrats talked this way?)

He was right. The men behind Sputnik were declared state secrets by their own totalitarian government. Only now do we learn that Sputnik, "far from being part of a well-planned strategy to demonstrate communist superiority over the West," was instead "a spur-of-the-moment gamble driven by the dream of one scientist, whose team scrounged a rocket, slapped together a satellite and persuaded a dubious Kremlin to open the space age," reports The Associated Press.

"Each of these first rockets was like a beloved woman for us," one of these scientists, now 95 years old, said. "We were in love with every rocket; we desperately wanted it to blast off successfully. We would give our hearts and souls to see it flying."

The Russians were not looking to slip the surly bonds of Earth and touch the sky, but seeking a rocket powerful enough to nuke the United States into toast. But no matter -- they spurred us all to go where no man had gone before.

There's something incredibly male about it all: a maze of testosterone-fueled competition and even bloodlust transformed into a soaring human achievement. "Because it's there" hardly seems like a reason, but in the end, is there ever a better one for sailing off into the unknown?

The boyishness that goes along with the manliness is fully on display with these guys. Ten of our 12 moonwalkers cooperated in making "In the Shadow of the Moon." They are Midwestern farm boys turned fighter pilots, who suddenly got the chance to fly faster, higher and farther than any other man had ever done, and they grabbed at the chance.

"Not a weak sister in the bunch," one of them says, non-reflectively. Neil Armstrong may be the first man to walk on the moon, but each man has his partly humorous claim to be intergalactically first at something: world record holder for speed in a lunar rover, say, not to mention Buzz Aldrin's more personal "first." (See the movie.)

On Oct. 26, Purdue University will dedicate a larger-than-life statue of Neil Armstrong.

Good. I hunger to see more memorials of man's achievements instead of our suffering, to think less about slavery, potato famines, 9/11s and the other evils that men did -- and still do, and will do -- and more about the places to which the human spirit, God willing, soars.