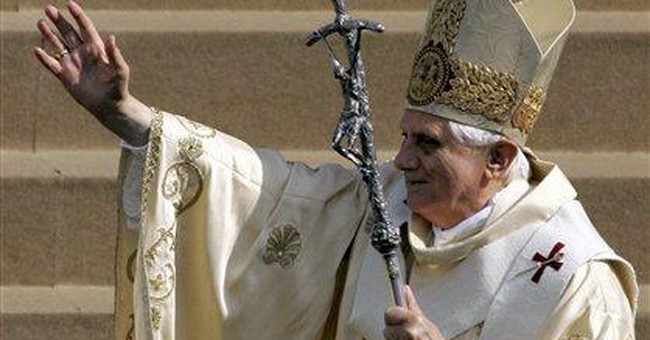 May Catholic clergy refuse communion to politicians who publicly support abortion rights? Who gets the right to choose in that case?

This week, for example, according to news accounts, 18 Catholic House Democrats, including Reps. Rosa DeLauro (Conn.), Patrick J. Kennedy (R.I.) and Carolyn McCarthy (N.Y.) publicly rebuked Pope Benedict XVI for reaffirming during a recent Mexico City trip that legislators who vote to permit the killing of the unborn have excommunicated themselves and may be refused communion during Mass.

"Do you agree with the excommunications given to legislators in Mexico City on the question?" a reporter asked the Holy Father. "Yes," Benedict replied. "The excommunication was not something arbitrary. It is part of the (canon law) code. It is based simply on the principle that the killing of an innocent human child is incompatible with going in communion with the body of Christ."

(In fact, the Mexican bishop in question did not issue any formal excommunication, but merely noted that support for abortion is incompatible with receiving communion, and politicians who have done so should not attempt to receive it.)

Back in D.C., the gang of 18 went apoplectic. Catholic popes, bishops or clergy who withhold communion to politicians, they said, are engaging in essentially un-American activities: "Religious sanction in the political arena directly conflicts with our fundamental beliefs about the role of democratic representatives in a pluralistic America -- it clashes with freedoms guaranteed in our Constitution. Such notions offend the very nature of the American experiment and do a great disservice to the centuries of good work the church has done."

"Offend the very nature of the American experiment"? Funny, it used to be Protestants who circulated the smear that Catholicism is somehow incompatible with America political life.

"Clashes with freedoms guaranteed in our Constitution"? Where exactly in the Constitution does it say that Washington politicians are to be exempt from moral or religious requirements or judgments of their faiths?

With Congress' approval ratings tanking almost into Bush territory, you'd think these powerful Washington pols newly in the majority would have their hands full doing their own job -- balancing the budget, preventing the collapse of Medicare and Social Security, staving off disaster in Iraq -- without trying to do the pope's as well.

Even Rudy Giuliani, no slouch in the pugnacity department, and who (according to New York media stories) is himself facing the very real likelihood of being refused communion at St. Patrick's Cathedral in New York City, had the good sense and the grace to say, when asked to comment, "I do not get into debates with the pope. That is not a good idea."

The truth is these amateur Washington theologians have it exactly backward. Separation of church and state does not mean elected officials get to tell religious leaders to whom they must give religious sacraments, on pain of public excommunication from "the American experiment."

You want to know what "separation of church and state" means on this issue? Consult a Mormon venture capitalist. At the first GOP debate earlier this month, Chris Matthews asked former Massachusetts Gov. Mitt Romney what he says to Roman Catholic bishops who withhold communion from Catholic politicians, and whether they are "interfering with public life?"

Romney shot back: "I don't say anything to Roman Catholic bishops. They can do whatever the heck they want. Roman Catholic bishops are in a private institution, a religion ... I can't imagine a government telling a church who can have communion in their church. We have separation of church and state, and it's served us well."