Only in New Jersey 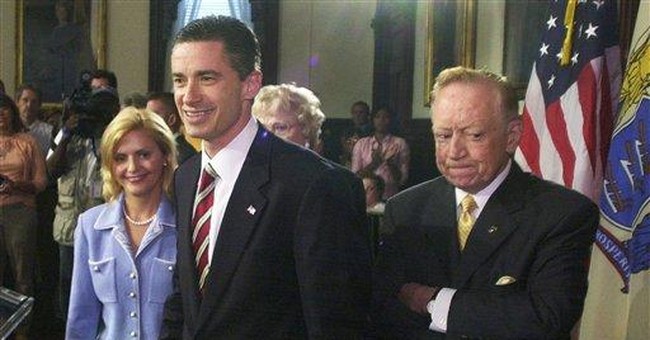 This week, Dina Matos McGreevey filed court papers accusing former Gov. Jim "I am a gay American" McGreevey of extreme cruelty, fraud and libel, for concealing his homosexuality in order to marry her. And so the McGreevey saga continues.

I'd say "only in America," but I suspect this is a story that could happen only in New Jersey.

Imagine: You are the governor of New Jersey and (by your own account) you're having sex with a young man behind your wife's back. The young man in question describes it as nonconsensual sexual harassment, but never mind. The feds are closing in on indicting your fundraising pals, one of whom even claims you arranged a special code word, "Machiavelli," signalling that they had a deal, the deal being: You pad their pockets with public funds in exchange for their donating campaign cash.

Jihadists have just recently blown up the Twin Towers, orphaning thousands of New Jersey children. The country's at war. You're taking time out to have anonymous sex in public restrooms (Or was that earlier? The timeline is murky). Rumors about your randiness are apparently rampant, so rampant you now claim your wife had to know that you were gay when you married. (She was asking for it, see? Somehow with these powerful men, it's always the woman's fault). So Dina didn't know you would be bleeping the boy toy in the marital home while she was in the hospital recovering from the birth of your child, but, hey, what did she expect when she agreed to become your own little Jackie Kennedy?

Suddenly it all blows up in big type. The one indisputable fact -- you are the man who let your lust decide who should head up homeland security in New Jersey -- is suddenly on the front page of every newspaper.

What do you do? First, you ask your wife to smile and look supportive at the press conference in which you will announce that (A) you are resigning, and (B) you are a gay American. Then you write a book, naturally, explaining how sorry you are for your mistakes, but homophobia made you do it. Leaders of groups like the Human Rights Campaign and Garden State Equality enthusiastically endorse your narrative.

But what do you do next? If you're Jim McGreevey you do this: You try to stiff your wife out of as much money as you can, naturally. You can live in luxury with a very rich boyfriend, postponing the job of earning the big bucks you might have to give your wife a piece of. You've got to keep the net worth down until the divorce is over, see? So you work a little on the side, teaching "ethics and leadership" (I kid you not) to future MBAs at a public university in New Jersey. This nominal income (about $17,000 a year) will allow you to pad your pension for years at taxpayer expense without driving up the old alimony, see?

What to do with the rest of your time? Above all, do not get a real job to support your child or the wife you used and abandoned. Instead, enter the seminary. The Episcopalians are glad to oblige. Studying four days a week, with $12,000 tuition for the next three years should do it. Bonus points: You call your wife a homophobe because she doesn't want you bringing a 5-year-old girl into bed with you and your new partner or displaying giant photos of naked men in the little girl's presence either.

Like I said: Only in New Jersey. I hope.