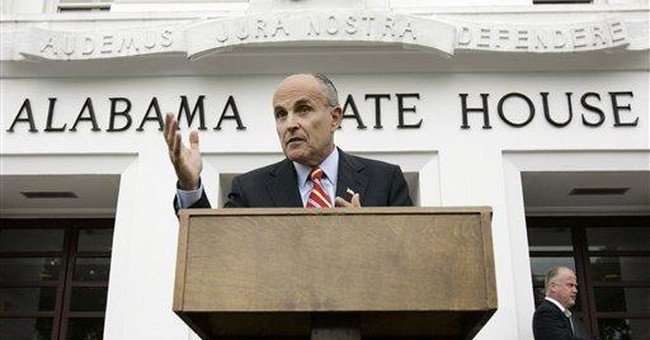 Thirty-eight percent for Rudy; 16 percent for McCain. On the surface, the latest Gallup Poll of GOP voters is great news for the Giuliani campaign. Mitt Romney scored just 6 percent, less than Fred Thompson and Newt Gingrich (10 percent each) -- two guys who aren't even officially in the race.

But the apparent collapse of the McCain candidacy (it's early yet) may end up being a problem for Rudy. Deep distrust of McCain as the designated GOP front-runner has to some extent shielded Rudy Giuliani from the focused opposition of social conservatives.

Personally, I know I tried really hard to find a way to make the match work. But it takes two to tango, and Rudy's clearly not interested in meeting anyone -- not me, not most of his spouses, not his son -- halfway. Or a quarter of the way. In fact, being Rudy, he's not budging a step. All the deep-seated longing for rapprochement clearly runs in only one direction.

I'm not sure Rudy gets it: Big and strong is good, but only if it's used on our behalf and not against us. A big strong guy who just doesn't care what you think is scary, not reassuring. The same Rudy who cleaned up the mean streets of New York is the same Rudy who used his leadership abilities to dump his wife via a press conference and then tried to make the rest of us feel ashamed for caring about how he treats his family. It's the same Rudy who came out swinging to defend his new wife (whom he clearly loves) and left his son slowly twisting in the wind with dying hopes of some attention from his dad. That's the same Rudy who last week endorsed public funding of abortions as a constitutional right, thus killing two birds of hope with one stone.

In 1989, Rudy stated "there must be public funding of abortions" and criticized President George H.W. Bush for vetoing federal funding for abortions. Asked by CNN if this remains his position, he said: "Probably ... Generally, that's my view." When asked, "Would you support public funding for abortion?" Rudy answered, "If it would deprive someone of a constitutional right, yes." Ultimately, he said that if it's a constitutional right, you have to provide public funding to make sure poor women can do it.

As the editors of National Review recently pointed out, this "makes neither logical, moral, nor political sense." No statements issued afterward by campaign spokespeople can undo the revelations of the way this candidate actually thinks and how he will govern.

Put the abortion issue aside for a moment, and think about what Giuliani has just revealed about how he thinks of the Constitution: If you believe in the First Amendment, does the government have to buy poor people printing presses? If you believe in the Second Amendment, must the taxpayers buy guns for poor folks? What kind of "strict constructionist" would say the government must pay for something if it is a constitutional right? For that matter, what kind of fiscal conservative would ever make such a claim?

Rudy Giuliani has now made it perfectly clear: Electing him for president (given a Democratic Congress) will likely mean taxpayer-funded abortions and Supreme Court justices with some truly odd and unreliable views of our Constitution. No pro-lifer in good conscience can vote for Rudy.

So what are people like me supposed to do? "I'm comfortable with the fact you won't vote for me," Rudy said in South Carolina last week.

OK, Rudy, you got yourself a deal.