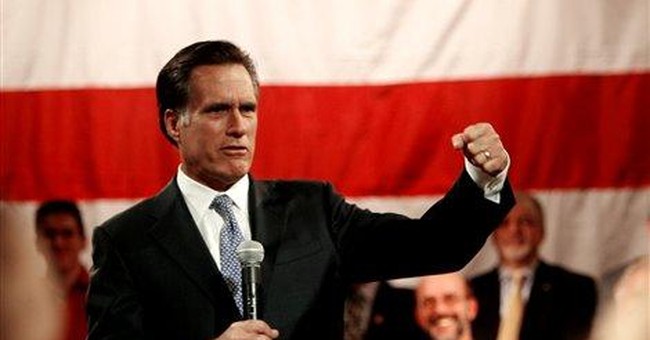 Mitt Romney is riding high this week after his victory in "the first primary," which consists of raising cold, hard cash to compete: more than $20 million in the first quarter, $5 million more than his closest contender, Rudy "Lay off my wife!" Giuliani. John McCain came in a lackluster third with $12.5 million.

Romney's campaign benefited from two distinct donor networks, according to media accounts: Wall Street and Mormons. GOP front-runner Rudy, struggling with one of those weird media freak shows erupting around his wife, Judith (her alleged participation in future Cabinet meetings and former puppy killings), must be a little envious on both counts.

Why is it that all the Dem candidates are still married to their first spouse, while among the current crop of leading GOP contenders, the only guy with just one wife is the Mormon?

Truth is, I don't think this is just an accident. There's something about Mormons the rest of us ought to pay attention to: Members of the Church of Jesus Christ of Latter-day Saints do much better than almost any other faith group at sustaining a marriage culture -- and they do this while participating fully and successfully in modern life. Utah is above the national average in both household income and the proportion of adults who are college graduates.

And while the vast majority of single people do eventually have sex sometime outside of marriage, Mormon teens were unusually likely to act on their beliefs. Only 12.6 percent of Mormon teens had had sex, compared to 18 percent of evangelicals and Catholics, 15 percent of mainliners and 19 percent of Jewish teens. (Mormon teens are also, incidentally, much more likely than any other religious group to report using birth control at first sex, perhaps partly because more Mormons are married before they have sex, but maybe also because the rest REALLY don't want their moms to find out.)

"Mormons are distinctive, absolutely, and even from their conservative evangelical cousins", as Regnerus told me. His new research focuses on the sex lives of teens, but other research suggests LDS church members are far less likely to have children out of wedlock, more likely to marry, and to have somewhat larger families (Utah is the only state where non-Hispanic white women have on average slightly more than two children).

All that delayed gratification adds up to good things for children and society. Not to mention, ambitious Young Readers take note, an unusually straight shot at the White House. Or at least, one less thing to worry about.