The Future of Marriage 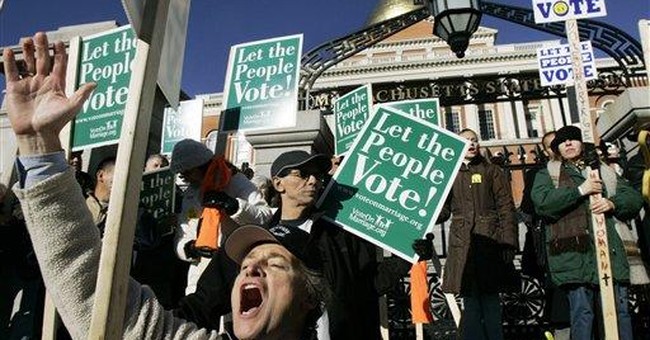 "For sheer cultural illiteracy and intellectual vacuity, nothing can top the debate over the meaning of marriage taking place in the United States of America in the early years of the 21st century." So says David Blankenhorn in his striking new book, "The Future of Marriage", and he should know.

For 20 years, David Blankenhorn has been at the forefront of our national conversation about marriage. His first book, "Fatherless America", named a new problem: When adults embrace for themselves the right to choose any family form they want, children lose their fathers.

"The Future of Marriage" can be read as a cry of frustration at how gay marriage has hijacked the marriage debate. (Full disclosure: David was my boss for a decade.) Gay marriage appears to make even very smart people pretty stupid about marriage itself. In a court brief recently, 30 professors of history and family law told judges that marriages are "committed, interdependent partnerships between consenting adults". Gee, how does that definition differ from, say, a law firm? Or a co-op, for that matter?

"I am not an unusually gregarious person", writes Blankenhorn, "but I have 'expressed love' to quite a few people in my life. I am involved in a number of mutually supportive relationships, many of which, I am sure, enhance social stability. But none of this information tells you to whom I am married or why."

What gets left out of this discussion? Sex, says Blankenhorn, for one thing. The striking thing about human beings, from a biological point of view, is how preoccupied we are with sex. Eros is not necessary for making babies. On the whole, nature has disfavored it as a reproductive strategy. Chimps mate promiscuously, but only when a female signals her fertility. Unlike other female mammals, women conceal rather than advertise ovulation.

The same-sex marriage debate tends to deconstruct marriage out of existence: Marriage turns out not to be anything in particular, just a word for two people in some kind of close relationship seeking something called "benefits" from government.

And indeed in the final chapter, Blankenhorn offers new evidence on how hard it is for the same society to endorse gay marriage and to retain a simple concept like "people who want children ought to be married." We cannot prove, he says, that gay marriage causes this decline; all we can show is that around the world, the two ideas stand or fall together.

The really big question, Blankenhorn points out, is not gay marriage per se, but whether we can and will reconstruct marriage as the crucial institution that connects Eros and generativity. Anyone interested in that question needs to read this book.