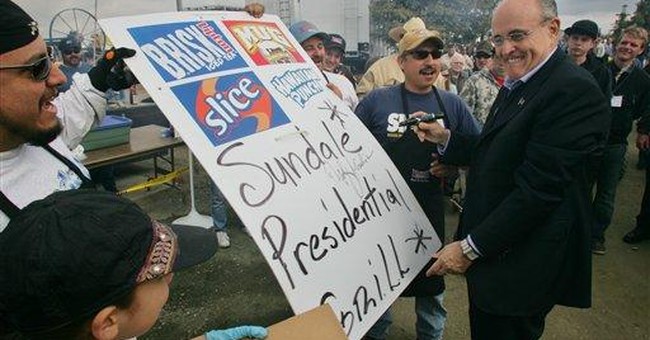 I've never voted for Rudy Giuliani in my life. But I'm thinking hard about it now.

In both cases, I surprise myself.

The rest of America may know Rudy as "America's Mayor" for his ceremonial performance post-9/11, but for New Yorkers who lived through the Dinkins years, Rudy Giuliani is more than a guy who stands tall when the skyscrapers fall. By the late '90s, people were beginning to say that New York City was ungovernable: Remember the court-driven interest group spending, the disorder, the bums taking over the parks and the playgrounds and the street corners, spiraling welfare costs, the crime, the small business disaster, the high taxes, rent control, the South Bronx? New York was a disaster area, a poster child for what liberalism hath wrought.

The glittering cosmopolitan New York City we now live in, the one seemingly every college student in America dreams about moving to, is largely Rudy's gift, forged in the face of intense, daily, nasty invective from those who at the time insisted that to demand order and civility in a large city was to be a fascist.

Even Rudy's 9/11 performance tends to be misdescribed. It was not that he "stood tall" or didn't emotionally collapse. George Bush came to New York City and made graceful speeches about how we will rebuild the hole in the ground that still remains. What stood out for us in that dark time was not that the mayor of New York insisted we would triumph over this adversity, but that he didn't try to spin us about how unimaginably bad this sort of adversity was. He didn't try to soft-pedal the uncertainty, the chaos, the suffering the city was going through, and that gave us the confidence to believe that reality, terrible as it was, could in fact be faced.

I never voted for Rudy when I lived in New York City for one simple reason: abortion. I don't look for purity in politicians, just for some small pro-life reason to vote for a guy: Medicaid funding, parental notification, partial birth abortion. Throw me the slightest lifeline, otherwise I assume he just doesn't want the vote of people like me. Rudy never did. So I never gave him my vote.

And of course it doesn't help now to recall the way Rudy treated his second wife, nor do I particularly want to imagine the third Mrs. Giuliani as Laura Bush's successor. So I could have sworn, even a few months ago, that I'd never vote for Rudy Giuliani, in spite of my deep respect for his considerable achievements as mayor.

So why would I even think of changing my mind? Two things: national security, and Hillary Clinton's Supreme Court appointments.

When I ask myself, who of all the candidates in both parties do I most trust to keep me and my children safe? The answer is instantaneous, deeper than the level any particular policy debate can go: Rudy Giuliani. And when I look ahead on social issues like gay marriage, the greatest threat I see is that the Supreme Court with two or more appointments from Hillary Clinton, will decide that our Founding Fathers, in their wisdom, created a national constitutional right to whatever social liberals have decided is the latest civil rights battle.

It's hard to see a state that George Bush won in which Rudy Giuliani will not beat Hillary Clinton. And he will put a whole slew of new blue states into play: Connecticut, New York, New Jersey, to name just three. (The latest Quinnipiac poll shows Giuliani in a dead heat with Clinton in Connecticut.)

Which puts people like me, who care very deeply about marriage and life issues, in the position of thinking hard about Rudy.