The Reagan coalition is dead - - Long live what? 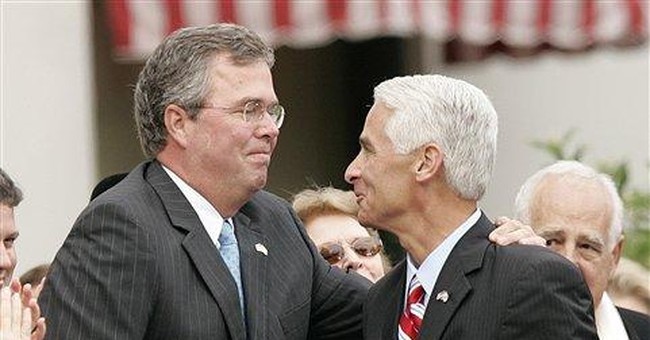 The Reagan coalition is dead. I came away from this weekend's National Review Institute's Conservative Summit in Washington, D.C., (where I spoke on a panel) with this thought reverberating in my brain.

Don't get me wrong: I'm not predicting who will be president in 2008, nor whether the slim Democratic majority in Congress will expand. That depends on the emergence of a new governing coalition, whose contours are yet to be firmly shaped.

But watching Ralph Reed debate the young libertarian whippersnapper Ryan Sager on whether religious conservatives take up too much space in the GOP, I noticed two things: A new day has dawned in GOP politics, and I appear to be one of the few who've noticed.

Former Gov. Jeb Bush was the rock star of the event, reiterating to loud applause basic conservative themes: limited government, which includes cutting taxes "whenever you can"; reform existing government institutions, such as ending social promotion in public schools. Finally (and this was for the social conservatives), Jeb urged Republicans to speak up about the need to strengthen families and for the idea of right and wrong.

Gov. Bush on education was very impressive. But I pick up the paper this morning and am equally impressed with New York's new Democratic governor, Elliot Spitzer, on education reform: Expand charter schools, demand accountability from principals and teachers' unions alike. Dems are learning to co-opt the most popular conservative reform ideas. That's not failure on the Reagan coalition's part; it's the sweet smell of success.

Notice too the defining characteristic of what GOP leaders like Jeb Bush offer to evangelical voters: talk. Talk about God, talk about families, talk about right and wrong. Democratic leaders have noticed this, too. Because if it's only a matter of talk, Dems can learn to do it, too, especially since (unlike conservatives) they can count on the courts to pass the base's social agendas. The Atlantic Monthly this month details the fascinating and successful efforts of two young evangelical political consultants to help Dems close the "God Gap," precisely with this new kind of talk. Dems don't have to win a majority of white evangelicals, just cut into the GOP dominating margin in this group to shift the GOP into permanent minority status.

Meanwhile, too many GOP elites seem intent on blaming for their defeat the very white evangelicals that the Dems are courting. The absurd idea that voters rebelled against the GOP's opposition to gay marriage is making the rounds (Craig Shirley's latest column is just one example). But aside from the war, the big obvious political reality on the ground is this: Dems' efforts to pass minimum wage increases and oppose the privatization of Social Security are very popular. This is the real elephant in the room that no conservative is allowed to notice. I do not say this with pleasure: I speak as a Reagan conservative who has both opposed increasing the minimum wage and supported personalizing Social Security. But if you can't notice political realities, you aren't in a very good position to figure out new strategies for victory of the principles you hold dear.

The Reagan coalition is dying, in the way great governing coalitions do: not through its failures, but through its successes. Think of the issues that held us together in the 1980s and 1990s: slash income taxes, spur economic growth, monetary reform, welfare reform, crime, communism and the decline of the family. Hardly any of these issues has the same political weight today because Reaganism's ideas transformed the U.S. economy, killed off communism, cut crime, stabilized inflation, and transformed welfare into workfare. Indeed, the irony is that the pro-family conservatives are the only part of the Reagan coalition whose problems are worse after 30 years of political effort. U.S. culture is coarser, families are weaker, schools now teach not only condoms, but gay marriage, porn is everywhere, abortion on demand is still the law, and almost 40 percent of our children are now born out of wedlock.

What is the next great governing coalition? Somewhere, the next Reagan is thinking hard.