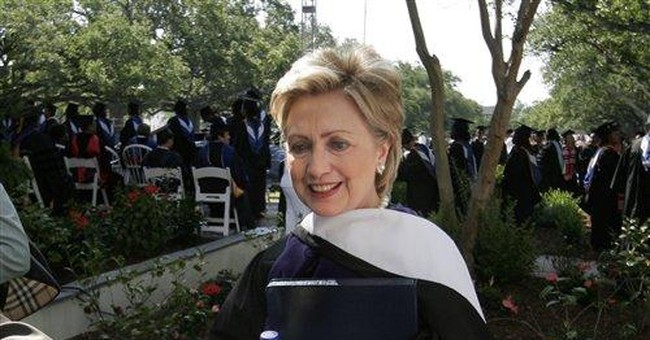 When teenagers start shopping for colleges, the price is often not something they dwell upon. Which is why I wasn't surprised when a mother recently told me about the experience of her daughter's boyfriend, who will be attending the University of Notre Dame in the fall.

The boy, who intends to major in journalism, was stunned at how little money Notre Dame awarded him, and he is naturally anxious about how he's going to pay for a degree that could cost more than $180,000. Apparently, his parents aren't going to be helping him out much.

I asked if the boy had ever considered less pricey alternatives. For instance, the University of Missouri has one of the finest journalism schools in the country and charges a fraction of Notre Dame's price. The mother, however, replied that this kid was only interested in "prestige" schools. Since I have a pretty good idea of how much journalists make, I'm hoping he can live on prestige for a long time.

I mention this story because it's important to be flexible and realistic about what you can afford. Who wouldn't want to brag about a school that makes others envious? But it won't feel so good when you're stuck with student debt in the six figures and you're wondering if you can afford Tuna Helper this week.

I'm not suggesting, however, that any kid who wasn't born to rich parents should hunt for schools with Wal-Mart prices. If you do that, you might miss some wonderful hidden opportunities. College administrators, who love to tell prospective families that the sticker price is often irrelevant, understand that most parents dismiss this as baloney. But odd as this will seem, the price can bear little resemblance to the stated cost. In fact, in plenty of cases, a seemingly expensive school can end up being cheaper than a state university.

An old friend of mine can happily attest to the veracity of this claim. Like a lot of families, Patti and her husband let her daughter Jenny assemble her own list of schools. Kids select schools with their emotions, which is OK if parents don't mind picking up a potentially obscene tab or they don't mind strapping a financial millstone onto their child's back.

Jenny got into the University of California Berkeley, the University of California San Diego and Sarah Lawrence College, which is a prestigious liberal arts college in New York. Berkeley and UCSD were obviously education bargains, but Jenny, who wants to major in theater, had fallen in love with the idea of attending a small school with all the personalized attention, small classes and other perks that it brings. The problem, however, was Sarah Lawrence offered her a puny financial aid package and my friend wasn't willing to mortgage her retirement for her daughter.

With application deadlines looming earlier in the spring, I suggested that Jenny apply to some schools with excellent theater programs - including Muhlenberg College in Allentown, Pa., and Lawrence University in Appleton, Wis. - that routinely award top kids with merit scholarships. During a hastily planned trip, Jenny fell madly in love with Muhlenberg, which has enjoyed success recently with graduates performing on Broadway.

Muhlenberg and Lawrence showered Jenny, who is a talented actress, with merit scholarships. In fact, she ultimately received so much cash from Muhlenberg, which costs $41,000 a year, that it's going to be cheaper attending the Pennsylvania school than Berkeley.

The key to prying money from a school is to make sure that it's a good fit. As I mentioned in my last column, a student who barely squeaks into a college isn't going to be treated like a king or queen. But beyond that, a family needs to determine if it's got a realistic shot at financial aid.

A quick way to find out is to use a new tool from the federal government called the FAFSA4caster (www.fafsa4caster.ed.gov). If the verdict is yes, you'll want to find schools that are sugar daddies and avoid the misers. If need-based help isn't possible, you should consider hunting for schools that might give your child merit money instead.

So where do you find schools that are generous with families who need financial aid? You can start at the College Board's Web site at www.collegeboard.com. You'll find profiles of thousands of schools in the United States and Canada. Type the school's name into the Web site's "College QuickFinder" and you'll discover plenty of statistics on the institution, such as SAT scores, costs and the majors it offers.

To research a school's financial aid practices, click on the "Cost & Financial Aid" heading. This screen will provide you with the price of the institution, including tuition and fees, room and board, books and supplies, estimated personal expenses and transportation costs. For a public university, College Board provides the tuition for residents and out-of-state students.

What you want to look for is the figure that indicates what percentage of a student's financial need the school typically meets. Of course the best number is 100 percent, though very few schools can afford to be this big-hearted. If a school meets 100 percent of a student's need, that means that the institution will provide enough money through grants or loans to cover the student's cost beyond what the family can afford.

Of course, Mom and Dad aren't going to uncork champagne if a school awards them only with loans. That's why it's equally important to look at a figure that's under the heading "Financial Aid Distribution." Here's where you'll learn how much of the typical aid package is stuffed with loans versus grants, which are free money. Obviously, you'll want to look at schools where grants are more commonplace.

In contrast, state universities, which are often strapped for cash, must focus on keeping their tuition low - so playing Santa Claus can't be part of their mandate. Most middle-class kids who attend public universities will receive only loans. That said, public universities across the country are providing financial enticement to good students outside their states.

Perhaps the best way to find a perfect academic and financial fit for your child's college years is to treat the quest as a term paper. If you spend enough time on your research, you should be able to find a school with the most welcoming hospitality suite.

EXCLUSIVE: Casey DeSantis Receives Humanitarian Award at House of Hope
Rebecca Downs
Sen. Ted Cruz Calls Out Google For Sending GOP Emails to Spam
Sarah Arnold
BREAKING: Title 42 Is Staying at the Border for Now
Julio Rosas
President Biden Reaches Lowest Approval Rating of His Presidency, and the Reason Why May Surprise You

Rebecca Downs
'Grave Sin': Nancy Pelosi Barred from Receiving Communion Over Abortion Stance
Spencer Brown
Should We Be Worried That Bill Barr Is Going to Cooperate With the January 6 Commission...Allegedly?
Matt Vespa