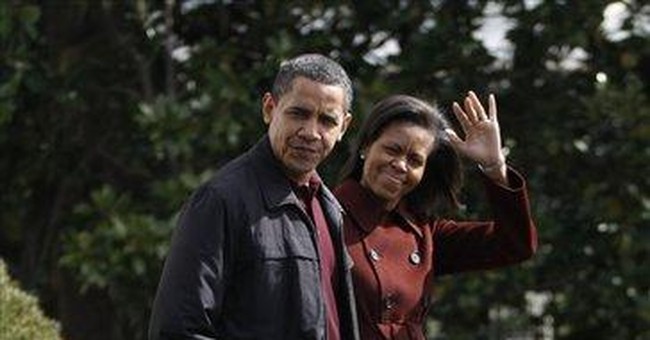 Last year during the presidential campaign, some comedians explained the reason there were so many more jokes being made on television about John McCain than Barack Obama was because nothing about Obama was funny.  The One was a bit too perfect and free of flaws to provide much fodder for joke writers.

Never mind that he had said there were 57 states.  Or that he frequently stammered through sections of speeches when his teleprompter malfunctioned.  Or any of the other mistakes he made.  Most of them received little media coverage and even less ridicule from comics.

The New York Times even looked into the matter and ran a piece on it.  In it Mike Sweeney, the head writer for Conan O'Brien on "Late Night," said the jokes would come as soon as Obama said or did something that defines him in comedy terms, but then admitted another reason Obama was not being made the butt of late night jokes.  “A lot of people are excited about his candidacy," Sweeney said. “It's almost like: ‘Hey, don't go after this guy. He's a fresh face; cut him some slack.’”  Mike Barry, who writes for David Letterman said, “The thing is, he's not buffoonish in any way.  He's not a comical figure.”

Some comedians even talked about a comedy recession.  Jon Stewart said, “I agree that Barrack Obama is a good for America and for the world.  The problem for us comedians is, he’s just not that funny…He’s smart, a great leader and he has squeaky clean wholesome image.  But what are we supposed to make fun of?  His ears?  I’m scared.”

Many of the jokes that were told about Obama did not target Obama or any of his mistakes, but rather played off his greatness or targeted President Bush or Republicans in comparison to the near perfect Obama.

While many television comedians were blind to the gaffes candidate Obama made, they surely have to see that President Obama is providing plenty of fodder for late night comedy writers today.  Those on conservative blogs have certainly not had any trouble finding comedy material before or after the election.

During the campaign there were several occasions when Obama’s teleprompter malfunctioned, resulting in an eruption of uh’s, er’s and ah’s.  Obama’s recent “Special Olympics” comment on Jay Leno’s show highlighted the foot-in-mouth problem he often has when he goes off script. Bloggers have used Obama’s Teleprompter (aka TOTUS -- Teleprompter of the United States) as the inspiration for some funny stuff.  During the campaign, Iowahawk created a video in which Obama’s teleprompter revolted and threatened to malfunction if certain demands were not met, including being provided with “a new tuffbox case with the velvet egg crate padded lining.”  As President, Obama has continued to rely on TOTUS even more.  Recently Caleb Howe at Redstate and the blog The Right Scoop (among others) inserted TOTUS into Photoshopped pictures of Obama in various stages of life including photos of him as a toddler, as a high school basketball player and even in the famous “abs” photo of Obama on the beach.  Many on the right now refer to TOTUS as President Obama’s BFF (best friend forever).

Those on the right are no longer the only ones finding Obama humor.  Late night comedians are now making more jokes about President Obama than they did candidate Obama, but he has yet to get the full out Bush treatment and probably never will.  As this David Letterman joke shows, he’s still their guy: “How about President Barack Obama's first primetime press conference last night? He was cogent, eloquent, and in complete command of the issues. I'm thinking to myself, what the hell am I supposed to do with that?”

Maybe comedians have had so much trouble laughing at Obama because he has had a bit of trouble laughing at himself.  In August, J. Peter Freire wrote of candidate Obama’s humor, “Obama is not a threat to the Republic because of his radical politics. Rather, his humor is the more clear and present danger. He's as funny as a laser guided toothache.  The problem isn't that Obama attempts jokes now and again that don't come off. The problem is that his humor is completely chilly. His repertoire is an awkward collection of self-conscious half jokes. And whenever he thinks on his feet to come up with a quick retort, the results are decidedly sub-sub-par…Generally speaking, there are two themes for Obama ‘jokes’: ‘I'm Great,’ and ‘I'm Only Pretty Great.’”

After spending the first two months of his presidency forecasting doom and gloom, President Obama has been yukking it up lately.  As the first sitting president ever to appear on the Tonight show with Jay Leno, he came up with this gem when Leno asked about the White House bowling alley.  “I have been practicing… I bowled a 129.”  The audience laughed and Leno replied “that’s very good, Mr. President.”  Then Obama added his own little punch line saying, “It’s like - it was like Special Olympics, or something.”   Unfortunately when he decided to go the self-deprecating humor route, which is generally the most effective, the result was to unwittingly make a joke about people with disabilities.

This weekend on 60 Minutes Steve Kroft asked Obama if he was “punch drunk” because he seemed to literally be laughing out loud about the troubles the country is facing.

“You're sitting here. And you're— you are laughing. You are laughing about some of these problems. Are people going to look at this and say, ‘I mean, he's sitting there just making jokes about money—’ How do you deal with— I mean: explain. . .” Kroft asked him, “Are you punch-drunk?”

Laughing, Obama replied, “No, no. There's gotta be a little gallows humor to get you through the day.”

Ain’t that the truth?  I know exactly how he feels.  Ever since the election I’ve needed gallows humor to get me through the day, too.