Dumbest Strategy in the History of the World: Riling Mama Bear 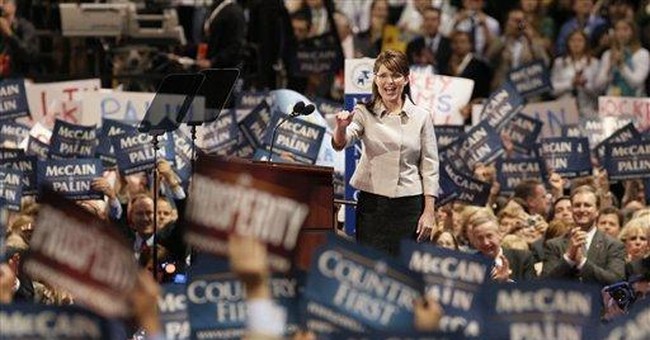 Sarah Palin has a lot to thank Democrats for this week.  As a result of relentless attacks from angry far left Democrats assisted by their friends in the media, her speech became the most widely viewed of any  speech given by a Vice Presidential candidate in the history of the world and Republicans emerged more energized than anyone could have dreamed.

The audience was unusually large due to the weeklong controversy surrounding Palin’s children.  Over the weekend, nasty rumors swirled around the internet that Palin’s fifth child, Trig, who has Down Syndrome, was not really her child, but her 17-year-old daughter’s.  Pictures of Palin in various months of pregnancy were examined on leftwing blogs. Even creepier than that, pictures of the teenage girl were poured over for evidence of a baby bump. In what has to be one of the lowest points in American journalism, the McCain campaign reports being deluged by the media for DNA samples to prove or disprove the fake pregnancy rumor they picked up from angry left websites, DailyKos and the DemocraticUnderground.  In an effort to put these rumors to rest, Palin and her husband Todd released a statement saying their 17-year-old daughter, Bristol, is 5 months pregnant and is engaged to marry the father, her high school sweetheart.

Barack Obama publicly denounced those going after 17-year-old Bristol as an issue citing his own unmarried teenage mother.  He declared the families of candidates off limits, but Obama followers and those in the media continued to advance the rumors.  The media frenzy over BabyBumpGate and other issues surrounding Palin’s children (could she be a mom and VP?) stoked public interest in this woman they knew so little about, ensuring a huge audience for her Wednesday night speech.  That is the biggest assist Obama supporters gave Vice Presidential candidate Palin, handing her an audience rivaling that which watched the speech delivered by Obama himself, but it was not the only one.

With baby bump talk off limits for the official campaign, Team Obama pursued the line of attack they began with their first reaction to the choice of Palin, which was to ridicule and belittle her experience as a small town mayor.  In the first response to the announcement of Palin last Friday came from Obama spokesman Bill Burton, “John McCain put the former mayor of a town of 9,000 with zero foreign policy experience a heartbeat away from the presidency.”  In that one sentence, the campaign belittled the experience of being a mayor, seemed to imply that small towns were inconsequential, and brought up the subject of foreign policy experience.  Obama supporters talked about how much they looked forward to a Biden–Palin debate where he would destroy the beauty queen with no knowledge of foreign policy.  They handed the McCain campaign a political ammunition trifecta.

The blowback was almost instantaneous.  Team O argued that experience was now “off the table” with the addition of Palin, but instead, putting her into the mix only brought the issue front and center.  The McCain campaign pointed out that Palin had more experience to prepare her for the vice presidency than Barack Obama did for the presidency.  Team O focused on ridiculing Palin’s mayoral experience and, somewhat bizarrely, ignored that she is the sitting governor of the state of Alaska, as if no one would notice.  Reporters began asking the Obama campaign about his experience – since his campaign brought it up and all. In response, Obama’s experience as a state legislator and U.S. Senator were cited.  When Team McCain pointed out that Palin had many years of executive experience and Obama had none, his campaign cited his work as a “community organizer” and (believe it or not) as someone who has run a national campaign for the past two years.  Pointing out Palin’s lack of foreign policy experience only begged the question of how much Obama had of the same.  With their response, Team O managed not only to appear desperate, but they also handed Palin some incredible material for her convention speech and fodder for political ads to come.

After stooping to pursuing a 17-year-old pregnant girl more vigorously than they had pursued connections between Barack Obama and domestic terrorist William Ayers, the media created public sympathy for Palin, something that became clear in her speech she did not seek nor require. Women from both sides of the political aisle expressed disgust over the sexist treatment of Palin by the media.  A post-speech poll of U.S. voters showed that 51 % thought reporters were trying to hurt Palin with their news coverage, and 24% said that made them more likely to vote for the McCain-Palin ticket in November.

On Wednesday night, Palin wowed the audience in the Xcel Center and people around the world with what Lucianne Goldberg accurately described as her “pitch perfect” performance, garnering praise from across the political and media spectrum.  In the speech she introduced the country to her family and her background as a hockey mom of five kids and mother of a member of the U.S. Army headed to Iraq, a woman who had been active in her community starting in her local PTA and going from there to mayor and finally governor. She took on the traditional VP role of skewering candidate Obama with witty barbs delivered with a winning smile.  She did not fumble or stumble or cry.  She showed no signs of anger or weakness or victimhood.  She came across as a strong, beautiful woman who was able at the same time to openly express her feminity.  Her family was absolutely picture perfect for television, to the point that angry Obama supporters who had been pushing stories about her children earlier in the week, hollered foul and accused her of improperly using them as props.  I guess they missed the part of Michelle Obama’s convention performance where her two little girls called Daddy O on the telephone via satellite to talk to him on the Jumbotron.

You would think that with the way all their attacks had blown back on them prior to the speech they would have learned their lesson, but that was not the case.  The first Obama campaign reaction to the Palin speech was to (I am not making this up) say it was written by Bush’s speechwriter.  Stephen Hayes reported Palin actually did have a hand in the speech, helping to write and rewrite it over several days.  Rachel Maddow criticized Palin for her “phonetic pronunciations of some of the hard words in the policy stuff” citing that as “a reminder that this is the first time she has ever talked about nuclear weapons, this is the first time she has ever told a lot of these stories, this is not her take on the country.”  Some experienced television journalists later pointed out that it was common for some words to be typed out phonetically on teleprompter.  A major criticism of her speech was that in her attacks on Obama, she came across as mean and “shrill.”  Isn’t that what they said about Hillary in the primary?

The attacks on Palin and her family were meant to bully her, belittle her and take her out of the equation.  Instead they produced possibly the biggest blowback in political convention history, helping Sarah Palin pull an audience of over 37 million viewers (38 million watched Obama).   The attacks also garnered sympathy for her – that is until voters saw her speak on Wednesday night and realized this was not a woman to pity, but to admire, and if you are her political opponent, to fear. They did something John McCain could not – energize Republicans as they have not been energized in years. They exposed many in the media for the Obama water-carrying tools they are.  They exposed many Democrats and Obama followers as ready to do almost anything to get elected including destroy a 17-year-old girl and mislead a country of voters.  Oh, and they revealed who is really on the side of women in America.  Take note all – that is what happens when you go after a mama bear’s cubs.