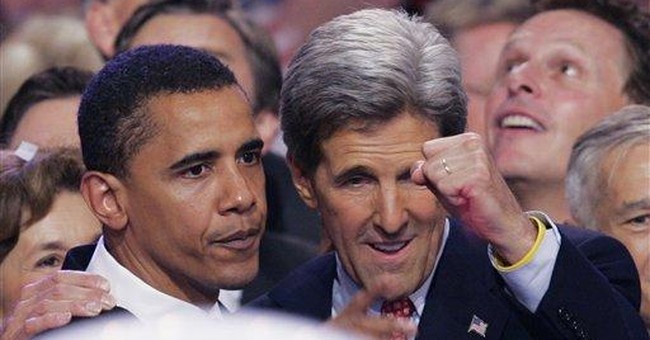 In the most recent debate in New Hampshire, when he wasn’t hurting Hillary’s feelings, Barack Obama was busy giving his GOP opponents a powerful piece of ammunition.  His response to one question in particular not only displayed an ignorance of the past couple years of action in Iraq and insulted those in the U.S. military, but also gave opponents a nifty little video clip for future campaign ads.

With lower casualties in Iraq and a level of success attributed to the surge that even Jack Murtha eventually had to acknowledge, many (including me) have speculated that Iraq would not play as big a role in this presidential election as earlier thought.  Obama’s response to the question about the success of the surge made it clear that Iraq is going to continue to be a relevant issue in the current campaign and if it isn’t, Republicans might want to make it one.

Debate moderator Charles Gibson asked the Democratic candidates “We started the surge early this year. You all opposed it. But there are real signs it has worked…So I want to ask all of you, are any of you ready to say that the surge has worked?”

Of the four Democratic candidates participating in the debate, only one, Obama, would concede that there are some positive signs in Iraq. Instead of admitting that maybe he was wrong to oppose the surge, he instead decided to take some credit for the progress made.

“Now, I had no doubt -- and I said at the time, when I opposed the surge, that given how wonderfully our troops perform, if we place 30,000 more troops in there, then we would see an improvement in the security situation and we would see a reduction in the violence…I welcome the genuine reductions of violence that have taken place, although I would point out that much of that violence has been reduced because there was an agreement with tribes in Anbar province -- Sunni tribes -- who started to see, after the Democrats were elected in 2006, you know what, the Americans may be leaving soon, and we are going to be left very vulnerable to the Shi'as. We should start negotiating now. That's how you change behavior.”

Steve Schippert wrote at The Tank “…one Democratic candidate has acknowledged progress in Iraq. And, in what strikes me as nothing short of self-serving fantasy, Barack Obama this past weekend swiftly and wrongly assigned significant cause for said progress in Iraq to himself and the Democratic majority in Congress.”

I realize that one way to appeal to the anti-war left base of the Democratic party is to claim to be the candidate who opposed the war, or the surge, more vigorously.  In light of recent news, however, that might not be such a great strategy for the general election – especially if progress continues.

This week, the Associated Press reported the following:  “In a telephone interview from Iraq, Marine Maj. Gen. Walter E. Gaskin, commander of the roughly 35,000 Marine and Army forces in Anbar, said levels of violence have dropped so significantly — coupled with the growth and development of Iraqi security forces in the province — that Anbar is ready to be handed back to the Iraqis… Under a plan accepted by the Iraqi government as well as the top two American authorities in Iraq — Ambassador Ryan Crocker and Gen. David Petraeus — the U.S. military will transfer control of Anbar to provincial authorities in March, followed by a ceremony in April, Gaskin said.”

The Democratic candidate making the strongest case might claim the nomination, but at the same time they will be providing Republicans with some great ammunition for ads in  the general election.  Those video clips of candidates declaring the surge a failure they were proud to have fought will juxtapose perfectly to reports of decreased violence and perhaps even political progress in Iraq.  Even if the situation in Iraq has improved to the point that it is no longer at the top of the news come November, the issue of qualification to lead the country as Commander-in-Chief will remain as important as ever.
Freedom Is Catching: Here's Where You Can Now Shop Without a Mask
Spencer Brown
The Latest Leftist Takes on the Iron Dome Are Quite Something
Katie Pavlich
Republicans Celebrate SCOTUS Decision to Review Abortion Case as Planned Parenthood Gets Nervous