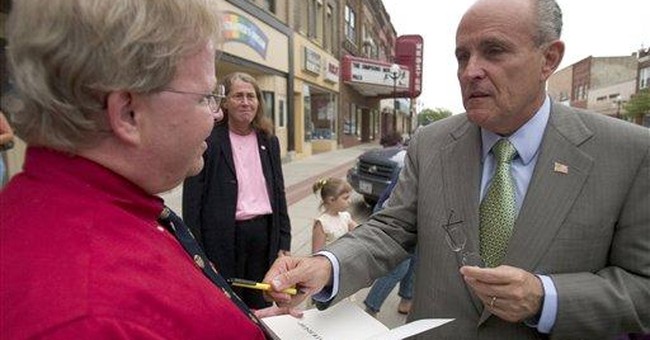 Right now it might seem that the 2008 presidential election will be all about Iraq, but that might not be the case if the surge counteroffensive continues to produce results and voters see some troops returning home next year. If troops begin leaving Iraq and there has not been a terrorist attack on U.S. soil between now and November 2008, issues that have taken a backburner for the past seven years will start creeping back into the public consciousness and into the election. I discussed some of those issues this week with Susan Molinari in an interview about her role as a senior advisor in Rudy Giuliani’s campaign for president.

Giuliani spent this week talking about his plan to “protect the quality of life for our children.” Part of the plan dealt with ways to make adoption easier, including financially through tax credits, while another aspect of the plan addressed ways to tighten laws and close loopholes on child predators.

Molinari said that “no one doesn’t believe in adoption,” but that Giuliani would be focusing national attention on specific ways the process could be made easier. She admitted that some other aspects of the plan may be more difficult to enact, but that Giuliani’s experiences as mayor in New York showed that he was able to get agreement on issues on which the parties do not usually agree.

She said she recently took her kids to Times Square at 10 o’clock at night. She said there had been a day she would never have dreamed that would be possible. She used the example to make the point that Giuliani had accomplished things in New York City that even she, a supporter, would not have believed could be done.

She talked a bit more about the reasons she believed the former New York City mayor was the candidate best to lead on these issues, but then we shifted to a more personal conversation. A discussion about some of the problems with the current child predator laws and how the Mayor planned to address them turned into a conversation about how scary it is as a mom to see all the dangers reported on television everyday. I told her about the “nice retired man” who lived across the street from me for eight years before being arrested for exposing himself to some children in the neighborhood.

What I didn’t tell her about was my friend whose daughter was molested by a man who climbed in through her bedroom window one night. My friend thought her daughter must have had a nightmare until she found an overturned bucket outside her window the next morning. Fingerprints on the bucket matched those of a man recently released from prison. Never again would she sleep with the windows open to enjoy a mild night’s breeze.

Nor did I tell her about the time several years ago that I sat in my mom’s living room listening to helicopters flying back and forth over and over again. My mom said she believed they were searching for a missing teenage girl. Later we saw a flood of law enforcement vehicles speeding down her road. The 17-year-old girl’s body had been found in a field less than a mile from my mom’s house. She had been abducted in a grocery store parking lot that I had been in many times. She had been raped and murdered.

We see stories like these repeated in loops on the cable news channels all the time. Sometimes the stories hit too close to home.

A block of voters referred to as “security moms,” married women with children who were concerned about the threat of terrorism, helped Republicans win in 2002 and 2004. Although the threat of terrorism is as real today as it was then, the security moms of this election cycle might be as likely to look to their leaders to protect their children from the online predators they see Dateline NBC catch on hidden camera as from terrorists intent on jihad.