If Democrats are upset there must be good news 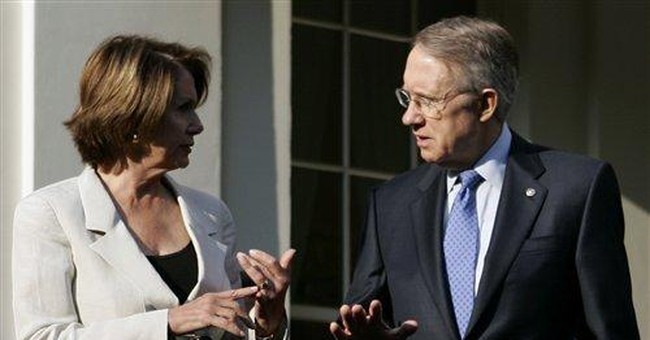 If congressional Democrats seem a little hysterical these days, it just might be due to news that the surge counteroffensive in Iraq is yielding some progress.

Rush Limbaugh and other conservative pundits have made the observation in recent years that for Democrats to win, America must lose. Their point is that with a Republican in the White House, good news on the economy, the war, and just about any other major issue, is good for Republicans and bad for Democrats.

We saw it with the economy. I remember Nancy Pelosi screeching in reaction to record economic growth at the end of 2003 asking, “Where are the jobs, Mr. President?” Unfortunately for her, and the opponents of the President, what followed her complaint about a lack of job growth was 46 straight months of job gains with over 8.2 million new jobs created since August 2003. Good news for America was bad news for Democrats.

Their tactic for dealing with good economic news, being that anytime there was progress on one front Democrats, and often the media, shifted their attention to an area where there was not so much good news to report, has been repeated in Iraq and the war on terror.

For many months we heard that the war in Iraq was a huge failure with the evidence cited including that parts of the country were being taken over by terrorists, that there was increasing violence between different factions within the country, that the Iraqi police and military were not stepping up and were not being trained quickly enough, and that there was lessening support across the country for the mission of coalition and Iraqi forces.

Now that it appears progress is being made on many of those fronts, with much of the credit going to efforts of the surge counteroffensive, the focus is being shifted to the national political arena in Iraq, which has not experienced the same progress that is being seen on the local level. There is little praise to be heard from most Democrats for the progress that has been made – only talk about the areas in which the same progress is not being realized.

I can’t help but wonder what Democrats will do if the same thing happens in Iraq that happened with the economy. When the economy began showing growth as a result of the President’s tax cuts, Democrats screamed that didn’t matter – it was all about the jobs. (“Where are the jobs, Mr. President?”) When job growth shortly followed other good economic news, the focus was shifted to the deficit. When the deficit began shrinking, even more quickly than the President had forecast, attention was shifted from the economy altogether to the war in Iraq.

What happens if the Iraqi national political leaders start coming together and the Iraqi Parliament begins making great progress? My guess is that instead of hearing praise from the Democrats for the success, we will see the goalposts being moved and attention being shifted yet again.

The problem for Democrats is that they have spent the past four years making Iraq into the “be all” and “end all” of not only this presidency, but of the Republican party as a whole. Good news in Iraq is good news for America, but as a result of Democrats spending the past four years investing in the defeatist position, good news in Iraq is not good news for their political prospects. Earlier this week, House Majority Whip James Clyburn said that a positive report from General David Petraeus on Iraq would be “a real big problem for us.” It doesn’t necessarily have to be that way though.

I will offer the following advice to Democrats in Congress knowing it is unlikely that they will accept it: Instead of ignoring, or worse denigrating, every word of progress our forces have worked to accomplish in Iraq, acknowledge that progress and celebrate it. You can still point out the areas in which progress is lacking. Just be honest about the good news there is to report.

If our mission in Iraq were to ultimately be deemed a success, everyone would know that most Democrats had been wrong to want to abandon the mission. But if Democrats would actually start celebrating our victories, maybe the majority of the public would forget that for a time they appeared to be actively working for defeat. Just maybe if Democrats in Congress would begin working to ensure that the progress that is being made in Iraq is built upon and encouraged, rather than belittled and abandoned and defunded, they would be able to share the credit for any resulting success.

Instead most Democrats seem determined to not only ignore the positive results of the surge, but to do what is in their power to see them reversed. That is not good for America and regardless of what the effect is at the ballot box, it is not good for Democrats either.