How Bush Can Save Iraq 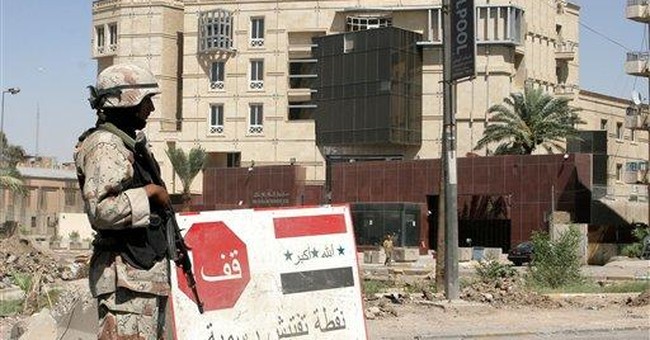 Over the past four years President Bush has failed to effectively communicate to the public the importance of succeeding in Iraq, and now some Republican senators are going wobbly in the face of low poll numbers. They appear prepared to deny our military even the few months they were told would be given before the September report on the progress of the counteroffensive. The President needs to use everything at his disposal to make the case to the American people that failure in Iraq is not an option. He needs to do it immediately and in a bold fashion.

President Bush held a press conference Thursday morning to discuss the state of operations in Iraq. It was a start, but it is going to take a lot more than talking to reporters in a morning presser to get the message through to the American public. There are too many misconceptions that have been allowed to exist for too many months. It will take a bold and focused effort to be sure the public gets all the information they need to make an informed opinion about the correct course of action to pursue in Iraq.

There are a few points the President needs to hammer over and over again. First he needs to educate the public about the true nature of the “Surge” -- especially that the increase of troop levels in Iraq is only part of the larger counter-offensive effort. In a RedState editorial it was explained that “the increase in troop levels, requested by General Petraeus, was one of many components …or “strategic shifts”… necessary to implement the sweeping new strategy, which radically altered our country’s course in Iraq and sought to solve the problems and shore up the weaknesses which four years of fighting had created and exposed.” Too many Americans believe (because they have been misled to believe) that the surge is simply a matter of throwing more troops into a losing effort to make the same mistakes over and over again, rather than a completely new strategy that is already yielding some progress.

The second thing the President has to do is get the stories of progress through to the public. The Democrats and the media have told the public repeatedly that the war in Iraq is lost -- a failure and a complete disaster. Slowly some reports of progress in Iraq are making it into major media outlets, but they are still not being reported as prominently as they should be. Not only do most Americans not know about the success stories taking place in Anbar province, once considered a lost cause, but many are not aware that any progress is being made anywhere in Iraq.

Another thing the President needs to get across to the public is a point he discussed in the press conference quite effectively. The point he made was that the debate today is not between those who want the troops to come home and those who want to keep them in Iraq. He said that everyone, including him, wants to see them come home and that the debate today is between those who believe the fight is lost or not worth the cost and those who believe the fight can be won and that as difficult as the fight is, the consequences of defeat would be much higher. He needs to explain why a drawdown of forces not linked to success of operations would be a disaster. He also needs to keep repeating that such a determination should be made based on information from military commanders in the field rather than political considerations at home.

Every bit as important as what the message is, is how and when it is delivered. The time to capture the attention of the American people is not at 10:30 in the morning. A prime time television address, or preferably a series of addresses, is the only way to get an unfiltered message through to a large segment of public.

The way the message is delivered is also critical. As passionate and determined as the President is on the subject of Iraq, he often fails to convey that in formal addresses. One format which has been successful for him in the past is to get out of the Oval Office and in front of a live audience. Whether that audience is one assembled somewhere in the White House, or a cheering group on a military base, the feedback he gets from a live audience seems to give the President an energy he never has when reading from a teleprompter.

Instead of only citing a list of cold facts and figures, the President needs to borrow a page from the Gipper’s book and personalize the message he is delivering. Quin Hillyer suggested that the public be told some of the stories of the heroes of the Iraq war – modern day Audie Murphys and Sergeant Yorks and that he present news of the progress in Iraq along with photographic images. He makes the point that the public has only seen the “ugly” images from Iraq and that those should be balanced by showing some positive images to allow the public to see the whole picture.

With so many cable channels today, even when a presidential speech is carried by the big networks many of the people I know simply switch to the Home and Garden Network or The Discovery Channel. In order to get the maximum number of people to watch, it is necessary to build the speech up as a major event so that even those who are not politically involved will think it is important enough, or simply be curious enough, to watch. Since the Iraq War is the major issue of the day, it should not be too difficult to persuade the media that an address on the subject is major news that should be covered live. What would ensure that a buzz was created though, would be to utilize an innovative approach not normally used by presidents.

One way to do that would be to intersperse throughout the President’s address, statements from some of those giving reports from Iraq. Most people will not see the report General Petraeus delivers to Congress on the progress of the counteroffensive. Instead they will see the 30 second sound bite chosen by the media that most likely will consist primarily of any bad news included in the report. I would love to see the President give a prime time television address in which he states the reasons it is important to succeed in Iraq and then calls General Petraeus (as well as possibly others) to the podium to provide the details. I would love to see a big screen in the background that would allow the General to show maps of the region and other images that would make the nature of the conflict and our new approach to it easier to understand as the briefings by Norman Schwarzkopf did in the Gulf War. If the President is accused of conducting a dog and pony show, then so be it. After being called a modern-day Hitler, he should be able to withstand that kind of criticism. Even with low poll numbers and vicious enemies, the President still has the bully pulpit. If he does not use it now, on this most important issue, then he might as well give up and surrender to the terrorists.

In addition to what the President must do, those of us who believe it is critical that we succeed in Iraq have important roles to play. Through groups like the Victory Caucus we can stay informed and find out ways we can influence those in Congress. One thing I am surprised we have not already seen is a series of “Harry and Louise” type ads explaining the importance of completing the mission in Iraq and the catastrophic consequences of defeat. A message from veterans who support the mission, with those who have fought in Iraq voicing in their own words the reasons it is so important for the mission there to succeed, could be quite persuasive. It is time the public realize that the consequences of failure in Iraq go far beyond a defeat for the Bush administration and that the possibility to achieve success in Iraq still exists. It is up to the President, and anyone else who believes that, to make the message loud and clear.