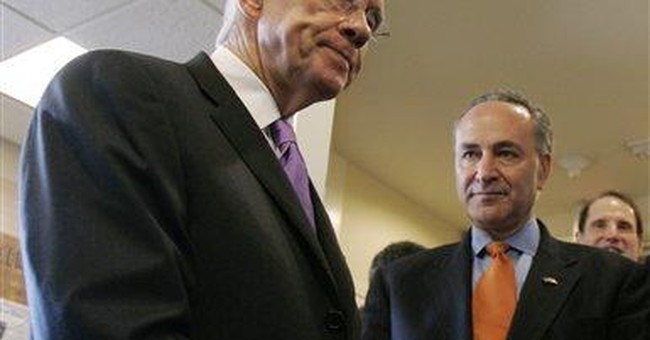 The time for niceties has passed.  The leaders of the Democratic party not only do not support the war effort, they do not want our troops to win and it is getting harder every day to pretend that they do.

Those in the field have noticed it, too. The L.A. Times recently reported: “Under a sweltering Iraqi sky, [Lt. Gen. James N. Mattis,commanding general of Marine Forces Central Command] asked for questions fromh is troops. Many were reluctant, but Marine Lance Cpl. Jack Kessel, 19,of , stepped forward. Something had been gnawing at him as he and his buddies go about the business of winning hearts and minds in al-Anbar province: ‘How are we supposed to fight a war when people back home say we’ve already lost?’ “

Based on what I have observed, I would tell Lance Cpl.Kessel that many of those declaring the war already lost do not want him to fight.  They are actively working for his defeat and they believe the sooner he stops fighting, the sooner that defeat will come.  I realize that is an absolutely horrible thing to say, but I have come to believe it is true.  Too much of the evidence I have seen in the past few months supports it.

Earlier this year, Senate Majority Leader Harry Reid declared the war in “lost” and since then he appears to be doing everything within his power to ensure that loss.    Democrats’ attempt to put a timetable into the funding bill failed,but that was only one part of the strategy to secure failure in .

Just over a month ago, Reid called General Petraeus a liar for saying progress had been made in Iraq, and more recently he has called Petraeus and outgoing chairman of the Joint Chiefs,Marine Gen. Peter Pace, “incompetent.”

No wonder Reid is attacking Petraeus, with Petraeus giving interviews resulting in reports like the following one in USAToday   this week:

“When Gen. David Petraeus drives through the streets of Iraq's capital, he sees ‘astonishing signs of normalcy’ in half, perhaps two-thirds of Baghdad…The scenes provide a sign that the new strategy in Iraqis working, although many problems remain…Five months after President Bush ordered an increase of 20,000 U.S. troops in Iraq, data suggest that sectarian violence in Baghdad has declined. Other tentative signs of progress have included a rise in Iraqi army enlistments and some quality-of-life improvements such as fewer electricity blackouts in the capital.”

Wednesday Reid, along with Speaker of the House Nancy Pelosi, told the President that his surge policy is a failure. The two wrote in a letter to the President, “As many had forseen, the escalation has failed to produce the intended results.” Never mind that all of the surge troops are not even in place yet.  Never mind that Reid and Pelosi don’t want to give those troops even the opportunity to produce results.  Never mind that the report on the progress of the surge is not to be made until September. Democrats cannot afford to wait for results.

Frederick W. Kagan recently reported potential signs of progress in a piece for the Weekly Standard posted at CBSnews.com: “We are serving as the bridge between the Sunni insurgents and tribal leaders and the Shia government. Before the end of last year, there were virtually no Sunnis willing to step on that bridge. Now, five months into the surge, tens of thousands are walking on it. It will take time to get them all the way to the other side, and it is possible that the Shia government will ultimately make it impossible. But one thing is certain: if we pull out now or abandon the current approach, the bridge collapses and it's the end of the story. But make no mistake about it: This is a strategy for success, if it works…. In the meantime, violence is way down in Anbar and people who had been our sworn enemies are now swearing to fight al Qaeda both in Anbar and in . Any objective observer would see these for the positive signs that they are.”

Democrats knew that one immediate result of us increasing troop presence and the pressure we put on insurgents would be increased violence.  The President and military advisers said from the beginning that violence would almost certainly increase in the short term,yet Democrats cite recent monthly “death counts” as proof the surge has failed,while ignoring signs that progress has been made.  Democrats know that what Kagan said is true,“if we pull out now or abandon the current approach…it’s the end of the story.” If this thing is to be truly lost, no time can be wasted waiting for it to be fully put into effect.   Opponents of the surge must declare defeat preemptively.

I don't know whether or not the surge will ultimately achieve the desired result, but I do know that progress is being reported from some regions of Iraq that were considered lost causes not that long ago.   I also know that if we do not give the surge even a chance to work it will certainly fail and that Democrats are heavilyi nvested in failure in .The President will be judged by what he did and what he tried to do in . That judgment might not come for many years and even if it is ultimately deemed a failure,I believe history will record that the President did what he thought was best for the country.  There is no doubt that the President wants to win in .Unfortunately the same cannot be said for most of the Democrats in Congress.