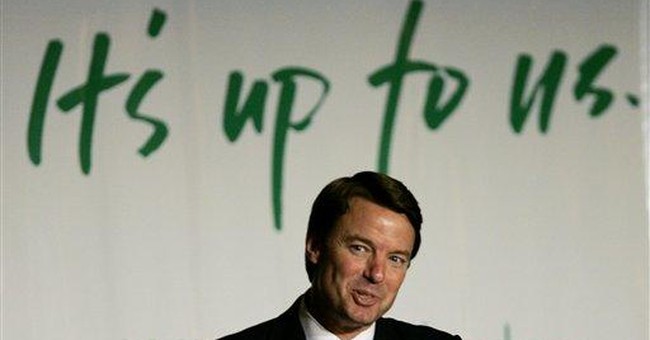 John Edwards has a Memorial Day message that is not earning high marks with many of the troops he claims to want to support. The Washington Post loved it, though. Enough, in fact, that they directly linked it from their website -- free of charge. (I am sure they will do the same for the GOP candidates with support the mission messages.)

Edwards' patriotic message follows (I know it is patriotic because he uses the word patriot and talks about “supporting the troops”):

“Take Action May 26th, 27th, 28 … As patriots, we call on our government to support our troops in the most important way it can - by ending this war and bringing them home.

This Memorial Day weekend, we will all take responsibility for the country we love and the men and women who protect it. We will volunteer, we will pray, and we will speak out. Each of us has a responsibility to act, a duty to our troops and to each other. Support the troops. End the war.”

So how does Edwards think we should express this sentiment on Memorial Day? His website lists “10 things you can do over Memorial Weekend to support the troops and end the war.” The suggestions include sending goodies to the troops, helping an injured vet, praying for the troops, contacting the president and those in congress to ask them to use their funding power to end the war, and my personal favorite, “get vocal.”

Edwards encourages citizens to “get vocal” by making “signs that say “SUPPORT THE TROOPS - END THE WAR” and bringing them “to your local Memorial Day parade.” Just to memorialize the occasion he says to “then take a digital photo of yourself and your family or friends holding up the poster and tell us about it. We’ll include it in a Democracy Photo Album on our site.”

After I picked my jaw up off the floor, I had to wonder whether I am just hopelessly out of touch with the pulse of those in the military or if John Edwards is truly one of the dumbest politicians ever. I know that the war in Iraq is unpopular. I get that. What I don’t get is how anyone, much less a politician, would think it makes good sense to choose the three-day weekend out of the year put aside to honor those who made the ultimate sacrifice for their country, to push a political anti-war message. After all, there are 362 other days of the year he could have chosen.

Wondering if I was out of touch with those in the military, I checked some of the reaction to Edwards’ Memorial Weekend plan. Here is a sampling of comments from some in the military and veteran online communities:

“As a patriot, the mother of an active duty Marine, the sister and wife of two men who proudly served in the Air Force during the Viet Nam Era, and the daughter of a WWII Navy Veteran, I am appalled at your suggestion to protest the war on Memorial Day. You claim to support the troops, yet you choose the very day set aside to honor those who have died in service of their country, to encourage people to negate the meaning behind those who gave all in Iraq. … We demand victory! Please lay aside your political ambitions and do what is best for this country.” – TJH Mom commenting at Gathering of Eagles

“This "protest" will serve to diminish the sacrifice made by our dead and their families in the service of this country by turning it into a form of political theater… Shoddy, insensitive, uncaring, self-centered hardly begin to cover the contempt I feel for the candidate who lowers the already contemptible world of politics to this new low.” –Eagle1 at Mudville Gazette

The response that seems to be getting the most attention is an open letter from Paul A. Morin, National Commander of the American Legion, who said “…one presidential candidate has blatantly violated the sanctity of this most special day...the video is titled ‘A Memorial Day Message from John Edwards,’ with the smoking gun note, ‘Paid for by John Edwards for President.’ Moreover, the e-mail recommends that Americans bring signs with the message ‘Support the troops, End the War’ to local Memorial Day parades. Revolting is a kind word for it. It’s as inappropriate as a political bumper sticker on an Arlington headstone.”

I guess I am not out of touch with the military community after all.

Whether a smart political move or the dumbest thing Edwards has done since allowing himself to be filmed painstakingly primping his hair in front of a compact makeup mirror, taking Memorial Day away from those it was meant to honor is just plain wrong.