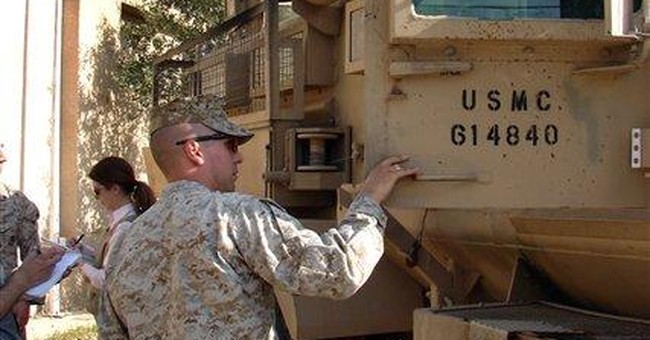 In Arlington last week, someone asked military blogger Jim of Sgt. Hook what he would say to those who want to support the troops by bringing them home. He said he would tell them "I don't want to come home until we win."

Increasingly the prospect of winning in Iraq is presented by the Democrats in Congress, and most of those reporting in the mainstream media, as a pipe dream. Ignore the defeatists. You might have to look a little harder to find them, but there are many who believe victory in Iraq can be achieved and that it will be in spite of the efforts of those in the U.S. Congress and the media – unless we surrender, that is.

Speaking on a panel at the milblog (short for military blog) conference last weekend, Bill Roggio, who has embedded as a journalist in Iraq and Afghanistan, said it is well known through documents we have discovered that much of the enemy’s strategy revolves around manipulation of the media. He said the enemy cannot beat us on the battlefield so they employ a strategy of attacks planned specifically for maximum media coverage and effect. This strategy has been quite successful.

Any time there is good news to report from Iraq, or news of a high profile visitor in Iraq, it is a pretty sure bet there will be some type of high profile attack such as a car bomb or other explosion to grab the headlines. Often news of positive developments in Iraq, such as the recent counter-insurgency movement in the Anbar province , which had previously been declared a lost cause, gets buried when reporters and politicians seize on high profile attacks as proof there is no progress being made.

From Iraq, Mohammed Fadhil, a Baghdad dentist who writes at Iraq the Model says, “I wasn't surprised when I saw Al Qaeda's second-in-command, Ayman al-Zawahiri, appear on Al Jazeera to announce America's defeat last week, not long after U.S. Senate Majority Leader Harry Reid did. Zawahiri claims Al Qaeda has won, and Reid claims America has lost.”He goes on to say the message being conveyed over the airwaves is not an accurate one.

“But from here in Baghdad, I see only a war that's still raging - with no victory in sight for Al Qaeda or any other entity. In fact, I see Al Qaeda on the ropes, losing support among my fellow Iraqis… And so, as an Iraqi, I say without hesitation: the American forces should stay here, and further reinforcements should be sent if the situation requires them… I don't understand why someone who has all the tools for victory would refuse to fight an enemy that reminds us every day that it is evil - with all the daily beheadings, torture and violations of all humane laws and values. With America's help - and only with its help - the decent people of Iraq can still prevail.”For more stories on the war in Iraq (and the war on terror) that are not being presented in the mainstream media, read the most recent milblog posts at sites such as Mudville Gazette.com, Blackfive.net and dozens of other prominent milblogs.

In addition to the anti-defeatist perspective on the war found on many milblogs, there are others organizing to make their voices heard in support of completing the mission in Iraq. The Victory Caucus and We Win, They Lose are efforts to mobilize and focus online supporters of the U.S. war effort in Iraq.

An appeal for redress petition dubbed an Appeal for Courage has been signed by over 2800 Active Duty, Reserve, and National Guard military personnel and was delivered to Congress Wednesday.

The petition reads, “As an American currently serving my nation in uniform, I respectfully urge my political leaders in Congress to fully support our mission in Iraq and halt any calls for retreat. I also respectfully urge my political leaders to actively oppose media efforts which embolden my enemy while demoralizing American support at home. The War in Iraq is a necessary and just effort to bring freedom to the Middle East and protect America from further attack.”

Senator Lindsey Graham accepted the petition at the Veterans of Foreign War Headquarters in Washington, D.C. and said, "Just for a moment, ask yourself what would they see in Iraq that would compel them to go back there three and four times? What is it that makes them want to go back and take on that risk that is ever present in Iraq and Afghanistan? This petition says it better than I could ever hope to say."

Those in favor of a U.S. surrender in Iraq are currently winning the media war, but that does not have to continue. Instead of relying solely on the television networks and wire reports for your news, investigate the milblogs, and other alternative media. You will find a perspective missing from much of the traditional coverage of the war. When you do find an interesting story that is not being told by the mainstream media, share it with friends and ask your favorite traditional media outlets why they are not covering it. Those of us telling our politicians not to surrender in Iraq must do our part by refusing to surrender in the media war here at home.