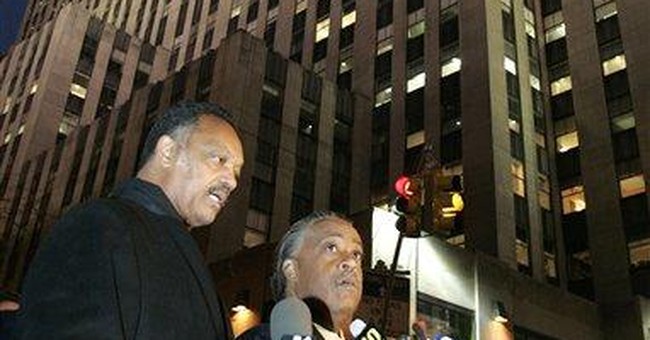 What a strange confluence of news stories this week. The strong statement of NC Attorney General Roy Cooper declaring the Duke Lacrosse players accused of rape "innocent" appeared alongside news that MSNBC dropped the Don Imus show for racist comments, due at least in part to pressure brought by Al Sharpton. Is it too much for me to hope that one day the truth about Al Sharpton and Jesse Jackson will be revealed as prominently as the truth about those phony rape charges was this week?

The truth about the accused Duke lacrosse players was known, at least at first, only to those with access to the evidence in the case. Many in the media were all too eager to jump on the privileged white athletes rape poor black woman story, but they did have a public official telling them there was validity to the claim. Those reporting Sharpton and Jackson's criticism of racist comments by Don Imus this past week had no such excuse.

The truth about Sharpton and Jackson's histories of exploiting racial tensions is well known, yet they continually get a pass from those in the media. Meredith Vieira on the Today show did bring up Jesse Jackson's past use of the anti-semitic slur "hymie," but it was in the form of an apology to him for mentioning it. "… Reverend Jackson, I apologize, but some of your critics reminded me of 1984, and I remember it as well. You were running for president, and you referred to New York City as as 'Hymietown'."

In 2003 following the controversy that erupted over Trent Lott's comments about Strom Thurmond, Jeff Jacoby asked when the media would take an "interest in digging into Sharpton's record -- a record far more shameful and egregious than anything Lott has to answer for." It is now four years later and both during his run for President as a Democrat Party candidate, and during numerous interviews he has done on the subject of race, they have yet to take much of an interest.

Al Sharpton's past exploitation of race in the Tawana Brawley case, and the Crown Heights riot which resulted in the murder of Yankel Rosenbaum, and in the Freddy's Fashion Mart protest that fueled violence resulting in several deaths, is well known to those in the media. For some reason, though, those in the media don't deem it important enough to alert viewers to that history when interviewing Sharpton on the subject of race.

Al Sharpton inserted himself into the Imus controversy in a big way, interviewing him on his radio show and refusing to accept an apology from Imus. Sharpton called early on for Imus to be fired. Yet few, if any, reporters interviewing Sharpton about the Imus comments brought up Sharpton's past.

At least in the case of Imus, he was guilty of making racist comments. In other cases, as with that of the officers charged in the Tawana Brawley case, the accused were not guilty. Many of those accused by Jesse Jackson of racist policies are not guilty either, but preferred a cash settlement and/or a commitment to do better in the future to a protracted and public showdown trying to prove their innocence.

What made the case of the Duke lacrosse players end in a very public and prominent revelation of the truth was the reaction of the accused, coupled with officials more interested in doing what was right, than in covering up for reckless District Attorney Nifong.

The accused and their families fought back when confronted with false allegations. Unfortunately many of the innocent accused of racism by Jesse Jackson and Al Sharpton choose the easier route of opening their checkbooks. Jesse Jackson plans meetings with CBS and NBC executives this week to discuss diversity in broadcasting and the lack of black hosts. It will be interesting to see the result of those talks.

The other reason the Duke lacrosse players' story ended as it did is that there were officials willing to acknowledge and make public the wrongdoing of D.A. Mike Nifong.

Al Sharpton and Jesse Jackson will continue to exploit race issues as long as there are no "officials" willing to call them on it. In this case, those with the responsibility to do so are the Democrats and the media. When are Democrats going to acknowledge the damage Al Sharpton and Jesse Jackson have done to race relations and apologize for their enabling of Sharpton and Jackson to exploit the issue of race for so many years? When are those in the media going to stop putting these men forward as the foremost spokesmen on the issue when their past words and actions make them anything but virtuous on the subject?