President Bush has been too nice to Democrats 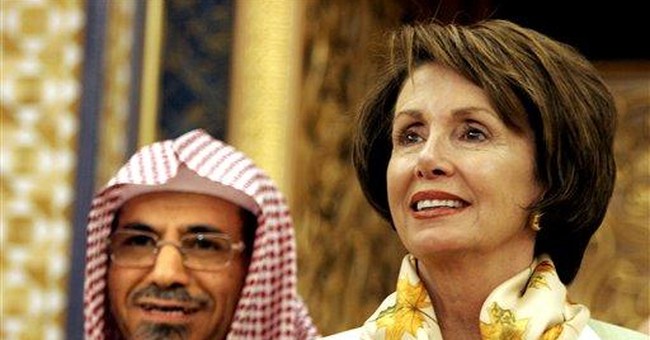 I realize that last statement goes against conventional wisdom. The Bush administration has been painted by opponents as sinister; manipulated by the dark forces of Dick Cheney, Karl Rove and (last but certainly not least) Halliburton. Not only have Democrats been successful spreading that nasty and inaccurate caricature, but they have not been held accountable for the damage that has resulted from their over-the-top partisan attacks.

This week House Speaker Nancy Pelosi went to Syria, in spite of objections from the White House, and bungled things in a big way. The Washington Post described the events. "After a meeting with Syrian dictator Bashar al-Assad in Damascus, Ms. Pelosi announced that she had delivered a message from Israeli Prime Minister Ehud Olmert that 'Israel was ready to engage in peace talks' with Syria. What's more, she added, Mr. Assad was ready to 'resume the peace process' as well… Only one problem: The Israeli prime minister entrusted Ms. Pelosi with no such message… Ms. Pelosi not only misrepresented Israel's position but was virtually alone in failing to discern that Mr. Assad's words were mere propaganda."

When Pelosi's Syria trip was first announced the White House issued a statement saying it was a "bad idea." Tammy Bruce perfectly described the communication failure of the administration in her comments on that statement. "A really bad idea?! That's the most they can come up with? The reason the president, and consequently this nation, is in such trouble is because neither the president nor the Republicans behave as though they have the moral high ground, or are even defending themselves or their policies enough to break a sweat."

"How dare Pelosi give extraordinary legitimacy to a terrorist nation whose own foreign policy rests on the murder of Christian leaders in the region. And how dare the Bush Administration for not saying something as simple as just that."

When Democrats in Congress recently voted to attach a deadline for withdrawal (and a ton of pork) to a bill to fund the troops in Iraq, President Bush called a press conference and did call Democrats out for trying to meddle in war policy. He also said, "the consequences of imposing such a specific and random date of withdrawal would be disastrous," Of those comments, some said he was attacking the Democrats. Nancy Pelosi told the President to "calm down."

He doesn't need to calm down, he needs to get fired up, and fast. It is time for the President to start calling things what they are. He is good at doing that when talking about terrorists and totalitarian dictators. When it comes to identifying the disgusting, hypocritical, and downright dangerous behavior of some Democrats, though, he generally holds his fire.

Democrats also know that it is ridiculous to think that President Bush would have made the WMD argument the focus of his case for the invasion of Iraq if he knew all along that stockpiles of WMD would not be found. Yet they continue to this day to promote the "Bush lied, people died" line. The President has yet to denounce their deceit for what it is, or to forcefully demonstrate to the American people the consequences of their words and actions.

There are serious consequences to leading Democrats spending the past three years telling the world the U.S. President lied about the reason for sending troops into battle to risk life and limb. There are consequences to Democrat lawmakers playing politics with a bill funding the troops in Iraq by insisting on deadlines that would hamstring the commander-in-chief and the military decision makers in the field. There are consequences to the Speaker of the House, third in line for the Presidency, undermining the current administration by attempting to conduct foreign policy in an extremely sensitive region of the world in direct defiance of administration policy and in spite of administration admonitions.

The President tried a "new tone" by extending the hand of friendship to Democrats when he took office, but got no credit for it. Anytime Democrats attack the President, sometimes with words and accusations more vile than anything they ever use on even terrorists, he is the one who gets blamed for the discord and gets ridiculed for his past stated intent to be a "uniter, not a divider."

In no way am I suggesting the President ever sink to the levels some Democrats have in their attacks on him. I do believe, though, that it is far past time to take off the gloves. It is time to accurately and forcefully identify their behavior for what it is and to spell out the consequences of their words and actions. The President's (and for that matter, most Republicans') reluctance to adequately respond to Democrats' reckless statements and behavior in the past has resulted in emboldening them to now attempt to usurp the role of commander in chief and attempt to conduct their own foreign policy.

The Washington Post declared Pelosi's defense of her trip to Syria "ludicrous" and said: "As any diplomat with knowledge of the region could have told Ms. Pelosi, Mr. Assad is a corrupt thug whose overriding priority at the moment is not peace with Israel but heading off U.N. charges that he orchestrated the murder of former Lebanese prime minister Rafiq al-Hariri. The really striking development here is the attempt by a Democratic congressional leader to substitute her own foreign policy for that of a sitting Republican president. Two weeks ago Ms. Pelosi rammed legislation through the House of Representatives that would strip Mr. Bush of his authority as commander in chief to manage troop movements in Iraq. Now she is attempting to introduce a new Middle East policy that directly conflicts with that of the president. We have found much to criticize in Mr. Bush's military strategy and regional diplomacy. But Ms. Pelosi's attempt to establish a shadow presidency is not only counterproductive, it is foolish."

Now why couldn't the President just say that?