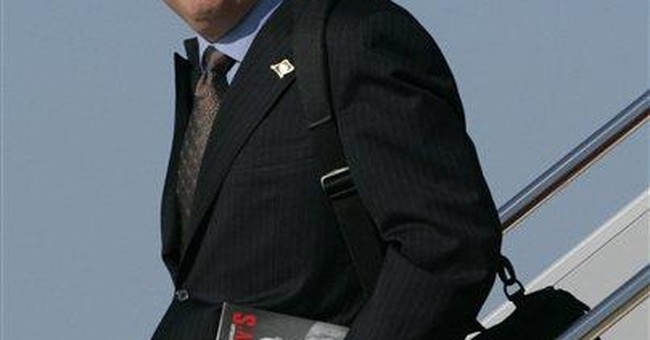 Democrats are calling for Karl Rove, Harriet Miers and other administration officials to answer questions under oath, and perhaps more importantly under Klieg lights, before a congressional committee. Why, if there is nothing to hide and there was no wrongdoing, would the President not want Rove and others to testify?

First some background for those who have not followed the U.S. Attorney controversy. The Democrats and the media (sorry for the redundancy) have worked themselves into a frenzy over the firing of eight U.S. Attorneys. Democrats claim the firings were politically motivated. In the case of at least some of those fired, Justice Department memos written prior to the firings show there were concerns about performance on issues including the investigation of voter fraud and the prosecution of border crime.

Whether or not there was good reason to fire the eight, they were political appointees and, as Bill Clinton fired all 93 U.S. Attorneys when he took office in 1993, President Bush had the authority to fire them for just about whatever reason he wanted. So, was the firing of eight political appointees political? Probably, in one way or another. If the attorneys were not performing in accordance with the political priorities of the administration, the firings could be said to be political. That is the nature of political appointments. How does a scandal arise from what even many critics admit was the legal firing of eight out of ninety-three U.S. Attorneys? The answer to that question is certainly political.

All one has to do to understand why the administration would not want to send Rove or Miers before a congressional committee is to understand the political motivation of Democrats to extend coverage of the non-scandal, to look at the result of Scooter Libby’s under-oath comments, and to watch the recent testimony of Victoria Toensing in the Plame matter.

Last week, in a circus posing as a hearing, Congressman Henry Waxman questioned Victoria Toensing about Valerie Plame’s covert status. Because Toensing helped write the law addressing the disclosure of a covert agent, she knew not only the law, but the intent of the law, which should have been useful information for the committee to have. Waxman asked Toensing some questions, but he did not let her answer them. It was obvious he was not interested in understanding the law. Instead he repeatedly interrupted Toensing, using the time he had to spout unsubstantiated claims and conspiracy theories and to insult Toensing.

When Plame testified to the same committee that she did not recommend or in any way influence the decision to send her husband on the Niger mission, Democrats took her at her word, in spite of the fact that her testimony was in direct conflict with previous testimony to a Senate committee and was inconsistent with a memo she had authored years earlier. Such partisan treatment of witnesses is certainly not unusual in congressional hearings.

It was obvious, though, that the focus of the recent hearing was not on finding the truth, but rather on “getting” the Bush administration and on creating sound bites for the evening news and the cable channels. It was a farce and nothing more than an excuse for congressmen to pontificate before television cameras. President Bush would be crazy to send administration officials into such a situation to alternately serve as backdrops and punching bags for grandstanding politicians.

Democrats in Congress have not only failed to enact some of their “100 days” promises, but are now polling  in the same range the Republican majority they replaced was polling last year. Their big agenda item, as Dean Barnett identified it is “Get Bush!!! And if you can’t get Bush, be damn sure to get Rove!” It is not a big mystery why the White House would not want to have Karl Rove and others dragged before a bunch of preening congressmen and women playing to the television cameras, even if there is "nothing to hide."