The anti-progressive fight against private equity 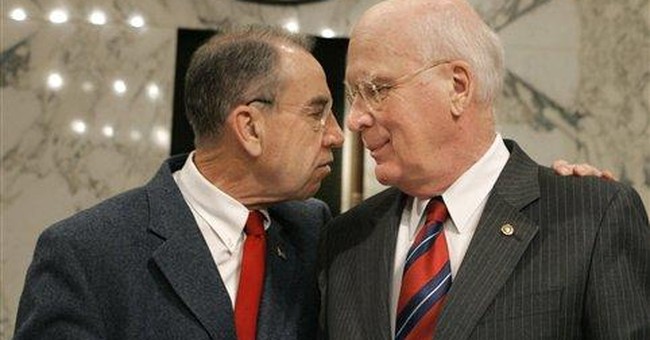 Last week, on the eve of private equity giant Blackstone Group LP announcing that it would go public, Senators Max Baucus (D-MT) and Charles Grassley (R-IA) introduced a bill that would dramatically alter the taxation regime applicable to private equity firms that are publicly traded.

Sound innocuous? Don’t be fooled—the Baucus-Grassley legislation is bad news—and not just for those rich venture capital types that most of us envy.

Currently, capital gains accruing to publicly-traded private equity firms are taxed at 15%. However, if Mr. Baucus and Mr. Grassley have their way, these partnerships will pay 35% tax on capital gains—just like corporations do, despite the fact that the law says a partnership is not a corporation.

The Baucus-Grassley plan looks appealing to those who see private equity as a vulture industry, which operates by partnership, despite its corporation-like behavior-- all in a nefarious effort to avoid paying tax. But setting aside that private equity firms organize as partnerships for many non-tax-related reasons (and muddying the waters between partnerships and corporations is legally troublesome), there is one big reason why the Baucus-Grassley plan should be stopped.

Contrary to popular perception, private equity firms contribute a great deal to our society, which ought not be overlooked—or nixed, purely on the basis of whether a given firm chooses to sell stakes to investors on a public, as opposed to a private, market.

Recently, private equity giant Cerberus decided to pursue a purchase of General Motors, an organization in dire financial straits, which happens to employ several hundred thousand workers, and carry responsibility for the pensions of several hundred thousand more. It is an investment that I hardly imagine that Joe Shareholder would be prepared to make—yet it is an important one.

Many of General Motors’ employees and pensioners work and live in economically downtrodden Michigan, where unemployment runs at 6.9% (2.4% higher than the US national average). If General Motors went under, which Cerberus may single-handedly prevent, many of those workers would struggle to find jobs in one of the worst economic climates in America. In addition, the pensions of former GM workers could be put in jeopardy. Ultimately, those workers and pensioners could end up reliant on government handouts—no good thing, for them, and no good thing for taxpayers, who would ultimately carry the can for increased welfare distributions, initially via the diversion of money from other important programs (perhaps education, perhaps transportation), but in a grave situation, very possibly via increased taxes, as well.

Considering this scenario, it is clear that penalizing private equity firms, who are prepared to take risks in order to make a buck while rescuing entities like General Motors—saving thousands of jobs and pensions at the same time—is not in the best interests of government, taxpayers, or society at-large. Yet this is precisely what Mr. Baucus and Mr. Grassley propose to do, in respect of publicly-traded private equity firms: force them to pay an extra 20% to the government each year—20% that could have been invested in companies that provide jobs, and used to bolster the American economy.

At the same time as curtailing the ability of publicly-traded private equity firms to invest and work to avert impending disasters arising out of insolvencies or, just as often, stagnated corporate growth, Mr. Baucus and Mr. Grassley are of course curbing the free market, and discouraging entrepreneurship. More worryingly, by financially constraining a high-yield industry, into which many public sector pension funds invest in order to counterbalance investments into lower-yielding stocks and bonds, they are also risking less prosperous retirements for teachers and policemen.

And, Mr. Baucus might care to note that his plan also potentially damages industries that progressive-minded voters in his party would like to see bolstered. Private equity is a top investor in companies that develop, manage and staff nursing homes (which at present are in short supply, and that means that beds come at an exorbitant cost), and in companies pioneering energy-saving and environmentally-friendly technologies—which tend not to be so popular with shorter-on-cash, conservative investors, who see them as risk-prone.

All in all, what Mr. Baucus and Mr. Grassley have proposed is a deeply flawed piece of legislation which could prove disastrous—for the private equity industry, and for many ordinary Americans.