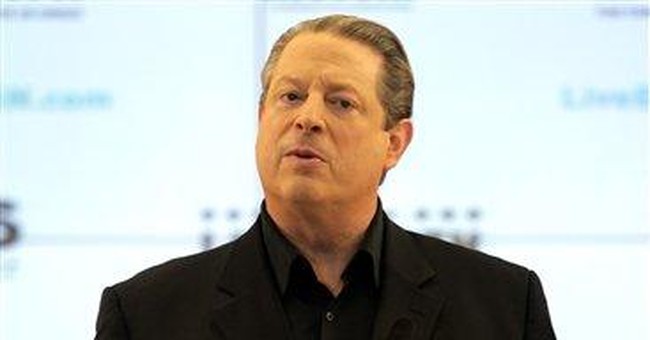 This Saturday, thousands around the world will gather for an in-depth discussion led by Al Gore on global warming and other environmental issues. The discussion will broadcast from seven major cities around the world. Just kidding! The only way Gore can get thousands of college kids to pay attention to him is to get a bunch of entertainers and bands to put on a concert together. Gore is literally the dorky kid in the neighborhood that people hang out with only because his house has a pool.

Gore’s son, Albert III, decided to help his father’s cause by combining the rock and roll lifestyle with the self-satisfaction of driving of hybrid. This week he was arrested for DUI and speeding at 100 mph in his Toyota Prius. Police reported that they found marijuana, Valium, Vicodin and Xanax, all without prescriptions. On the plus side, he’ll be able to recruit all the celebrities he’ll meet to the global warming cause during his presumed stint in drug rehab.

On Facebook, a social networking website, there are dozens and dozens of groups dedicated to Al Gore’s Live Earth concerts, which all take place on July 7, 2007. Not surprisingly, the neighborhood kids are focused on the bands, not the flimsy message of stopping global warming. The New York concert includes performances by The Police, Akon, Kelly Clarkson, Melissa Etheridge, Kanye West, Ludacris, among others. The cost for one ticket ranges from $83.00 to $348.00. Few concert goers on Facebook mention global warming or Al Gore. Here’s a sample of some posts about the concert:

· Kris writes, “Cant wait for this concert, def. have my tickets ready. Bada**. Loud music, huge crowds, famouse [sic] people... and something about saving the earth. Can life get better? I submit that it cannot!”

· Abraham asks, “is this that concert Nelson Mandella [sic] is organizing?” [I think a little part of Al Gore just died.]

· Sarah writes, “CANT [sic] WAIT .. got our tickets this morning.. sooo excited.. Mothers lock up your sons.. cant [sic] wait to tailgate!!!!!!!!” [I propose that we start a campaign to rid the world of excessive punctuation.]

Live Earth’s purpose is “to trigger a global movement to solve the climate crisis.” It’s the kind of mission that is adored by the Left. It’s vague enough to claim victory for their side and bogus enough to make the crisis last forever. In short, it’s the same mission of every worthless government program.

This week, Gore wrote in a New York Times op-ed, “Our home — Earth — is in danger. What is at risk of being destroyed is not the planet itself, but the conditions that have made it hospitable for human beings.” Gore gives us the example of Venus, which is close to the same size as Earth and has the same amount of carbon. However, Venus’s carbon is the atmosphere and Earth’s carbon is in the ground. Gore writes, “As a result, while the average temperature on Earth is a pleasant 59 degrees, the average temperature on Venus is 867 degrees. True, Venus is closer to the Sun than we are, but the fault is not in our star; Venus is three times hotter on average than Mercury, which is right next to the Sun. It’s the carbon dioxide.”

It’s curious that Gore would use an example of an uninhabited planet to make the case that humans are destroying Earth. But, I suppose common sense has never been the Left’s strong suit.

As was done with the movie An Inconvenient Truth, the Live Earth concerts also have a companion book. For an environmental movement, they sure seem unconcerned with wasting paper. The Live Earth Global Warming Survival Handbook: 77 Essential Skills To Stop Climate Change claims to provide “essential skills for stopping climate change--and for living through it.” The book is full of haughty, pointless advice, including:

“Bathe together”
“Shut down your office PCs overnight”
“Build a bat house”
“Why not commute to your home office? Nine out of 10 of us drive to work, with the average commute now up to 25 minutes each way and still climbing. That’s a lot of time wasted, and a lot of gasoline becoming co2 emissions.”

Yes, why don’t more truck drivers, construction workers and the other blue collar workers that run the country save on gas and just telecommute from home? The Live Earth spokesman, expensive concert tickets and ridiculous book perfectly illustrate the Left’s “climate crisis” movement – an indulgent past time for rich liberals (or liberals with rich parents). However, once the summer ends, the kids will go back to their real friends and Al Gore will be there, pathetic and alone, with nothing but an empty swimming pool.