Grove City College- A Reflection in the Spirit of Hope 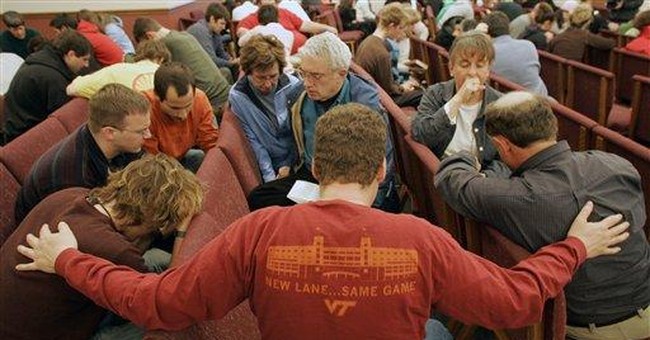 As many Townhall readers may remember, I spent last week blogging from Grove City College’s Center for Vision and Values conference on “The De-Christianization of Europe: From Nicea to Nietzsche”. It was a privilege to be a part of this highly philosophical, conservatively intellectual examination into the decomposition of Christian values that’s taking place across the world. Grove City truly is a bastion for principled education and it was refreshing to observe the students as they interacted with some of the brightest minds in modern religious studies.

Following the Virginia Tech travesty, I reflected again on my experience at Grove City College and the severe contrasts I see between educations grounded in the teachings of Christ and the atmosphere this creates for a student body- as opposed to the secular educational system of public colleges and universities. As more and more private universities give way to the political correctness of the Rosie O’Donnell culture, cutting ties with their formerly Christian roots, it’s important that we acknowledge the irrevocably intrinsic presence of faith within educational communities - despite all attempts to ignore it.

In the coming days, weeks, and years, those affected by the horrific events at Virginia Tech will attempt to come to terms with their grief and find hope through the rebuilding of a close community. Many of us are becoming increasingly alarmed at devilish acts being committed within the confines of what should be shelters for scholarly achievement. The prestigious reputation of Virginia Tech is well-noted across the country, which makes these acts even more difficult to swallow. It is a direct assault on the confidence and security felt by students in the cultivating environment of a university campus.

However, those of us who think that we’ve begun the descent on the slippery slope of moral decline for future generations should find hope in the bright example of Grove City College. If you visit the Grove City College website, you’ll find an unabashedly Christian foundation that begins with their mission statement:

Since its founding in 1876, Grove City College, committed to Christian principles, has striven to be equal in academic quality to the finest four year colleges. It seeks to provide liberal and professional education of the highest quality that is within the reach of families with modest means who desire a college that will strengthen their children's spiritual and moral character.

This mission is so engrained within the identity of the college that they fought all the way to the Supreme Court to preserve their right to educate from a religious perspective in a culture that’s becoming increasingly hostile towards religious influences. In a landmark case, Grove City College v. T.H. Bell, Secretary of the Department of Education, Grove City successfully challenged federal regulation and upheld their commitment to freedom. They remain a rare example of a college or university that vehemently refuses to accept government funds- which ensures their right to determine their own curriculums for Grove City College students.

The result of their garnered independence from federal control was evident during a class I observed on the final day of the Center for Vision and Values’ conference. As I posted in my last blog, I found myself accidentally attending a class as I remained in the back of the auditorium during a conference recess. As I was concluding some work for Townhall on the computer, I looked up (in utter surprise) to hear the professor lead his class in a pre-lecture prayer…an obvious benefit of academic freedom.

It was impossible to deny the existence of something great on the campus of Grove City College. Maybe it was the presence of the Holy Spirit. Perhaps it was the comfort of knowing that one could be free to seek an education free from worry that it may be tainted by government agendas. Either way, the atmosphere that Grove City upholds is one that cynics should consider before writing off future generations as casualties of a broken system. All is not lost.

So as we attempt to find hope and reconciliation amongst the devastation felt by all Americans over the immense loss on the campus of Virginia Tech, we can acknowledge that it’s ok for these students to turn to faith- integrating it into the healing process and the rebuilding of their educational community. Virginia Tech will undoubtedly be stronger after having endured this collective heartache, and we’ll be left with incredible stories of courage in the face of evil.

By looking optimistically at the future of education in America, one can find hope through the stories of courageous students and the example set by the mission of Grove City College. Whether it’s seen in the institutionalized freedom of values or the random acts of faith and sacrifice, it’s clear that God is still an instrumental part of the American educational system.