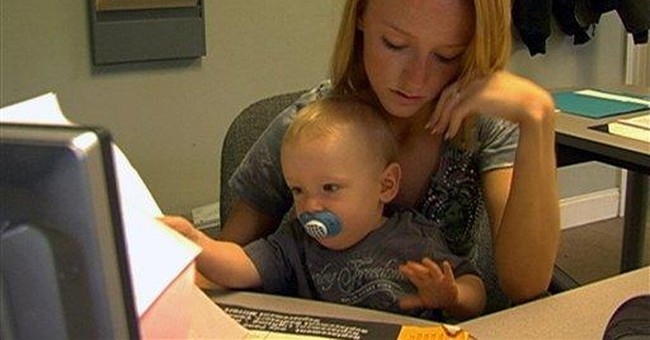 The rate of teen pregnancy in the United States has fallen dramatically over the last two decades -- 52 percent -- though in the developed world, it still remains the highest. In 2008, the last year for which in-depth data are available, nearly 750,000 young women under 20 became pregnant, including some 236,000 teenage girls ages 15-17. The overwhelming majority of them were unmarried.

The good news is that the numbers of teen pregnancies have declined so significantly for two reasons: First, fewer teens are having sex and second, more teens who are sexually active are using birth control.

More than half of all high school students have not had sex, according to the Centers for Disease Control and Prevention, which has been monitoring sexual behavior in teens since 1990. The National Campaign to Prevent Teen and Unplanned Pregnancy was founded in 1996, and I joined the board soon after. Our goal was to reduce teen pregnancies by one-third. There aren't many public policy organizations out there that can claim to have exceeded their goal so handsomely. But this campaign didn't rest on its laurels. Instead, it broadened its attention to focus on unplanned pregnancies overall.

About half of all births in the U.S. fit this description. And while an unplanned pregnancy may prove an inconvenience to married couples, it is rarely a tragedy as it too often is for unmarried women. Unfortunately, while teen pregnancies are declining, those among unmarried 20-somethings have gone up dramatically.

The problem is complex. Sexual mores have clearly changed. Sex before marriage has become the norm, with little pushback even from churches. More than three quarters of young adults ages 18-24 have had sex in the last year. At the same time, young adults are delaying marriage to new lengths.

The median age of marriage for women in 1990 was 24, and for men, 26; today it is roughly 26 and 28, respectively. Yet many of these young adults are not using reliable birth control -- or are doing so inconsistently -- which is why unplanned pregnancies have risen among this population. In fact, birth control use has actually declined among unmarried women ages 20-29.

The consequences are enormous, not just for the individuals but for society as well. Out-of-wedlock births now account for four out of every 10 births in the U.S., and the numbers are much worse among blacks and Hispanics. Children born to unwed mothers, according to every reputable study on the issue, perform worse in school, are more likely to drop out, commit crimes and have children out of wedlock. And they are far more likely to be dependent on government assistance than children who are raised in two-parent families. The poverty rate for children raised in single-mother households is 63 percent.

For those who are interested in reducing out-of-wedlock births -- and abortions -- urging sexually active young adults to use reliable birth control in a consistent manner would seem to be a no-brainer. Unfortunately, however, the issue is more controversial than it should be. Many people are simply afraid to speak out.

According to surveys conducted by the National Campaign, nine in 10 adults, including 95 percent of Democrats and 91 percent of Republicans, agree that for those who are not trying to get pregnant, using birth control is taking personal responsibility. Still, most politicians, especially Republicans, don't want to talk about it.

The National Campaign decided to try and break the silence this week by urging people to use social media to show their support for birth control by promoting the first national "Thanks, Birth Control" Day. Ads in New York City's Times Square, thousands of Twitter and Facebook mentions, as well as blog posts gave the issue some visibility, but not nearly enough.

Until it becomes respectable to talk about this issue and to urge changes in behavior, young women will continue to become pregnant before they want to -- or should. It's not a difficult problem to solve. But the first step is to bring the issue out into the open. Thank you, National Campaign to Prevent Teen and Unplanned Pregnancy.