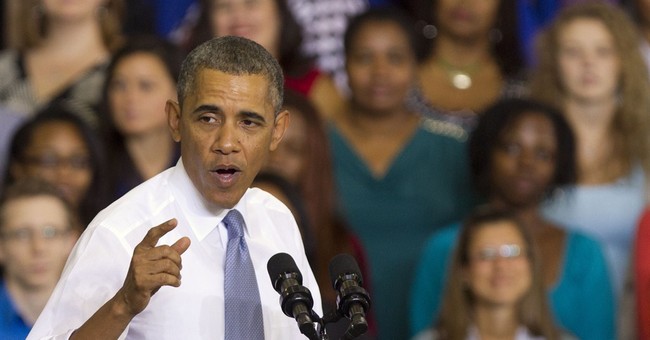 "The most morally crimped speech by a president in modern times." That description of President Obama's address to the United Nations this week came not from conservative critics but from the editorial page of The Washington Post.

The Post was reacting to what will now go down as the Obama Doctrine in foreign policy. In what has become Obama's signature tone, much of the address was focused on America's "failures," as he defines them: the war in Iraq, past efforts to "impose democracy," unilateral U.S. military action, Cold War politics. But he also laid out in the clearest terms of his presidency what he defines as America's "core interests" in the Middle East and North Africa -- a list so narrow it embarrasses even the president's supporters among the liberal media.

Obama defined four core interests. He promised to "confront external aggression against our allies and partners" and to ensure the "free flow of energy from the region." He said that the U.S. will continue to dismantle "terrorist networks that threaten our people," which includes "work(ing) to address the root causes of terror." Finally, he said that he "will not tolerate the development or use of weapons of mass destruction."

The path the president has charted for the U.S. is circumscribed. Only in rare circumstances will the U.S. intervene directly -- and even then only with the cooperation of other nations.

So, presumably, if Syria invades neighboring Turkey or Israel, the president might act. Or if, say, Egypt blocks the Suez Canal or Iran mines the Persian Gulf so that oil tankers can't get in or out, he'll do something. The president already has proved that he's not prepared to do much to stop Syria from using chemical weapons or Iran from building a nuclear bomb. Only when it comes to dispatching drones to hit terrorists has he shown much willingness to use force.

But what rankled the Post most about the speech was the president's de-emphasis on promoting human rights as a core interest of American foreign policy. "As a practical matter, if a president signals that democracy is not a core interest, if it ranks fifth or lower on his list of priorities, it won't be promoted at all."

Nowhere in the president's speech was his lack of commitment to human rights clearer than in his overtures to Iran. "We are not seeking regime change," the president said, though he claimed to remain "determined to prevent Iran from developing a nuclear weapon."

The two are mutually exclusive. We've been down the path of negotiations with the mullahs, and it has achieved nothing but buying time for the Iranian regime to enrich more nuclear material. Meanwhile, nearly 80 million Iranians continue to live in one of the most repressive nations in the world, while the regime exports terrorism around the world.

There is some irony in Obama's abandonment of human rights as a priority. There was a time when the left claimed to care about democracy and human rights. In the name of human rights, President Jimmy Carter abandoned the Shah of Iran and Nicaraguan President Somoza when revolutions in those two countries commenced -- though the regimes that replaced those dictators were even more tyrannical. But the left has always been more concerned with human rights abuses by America's allies than its enemies. And in that respect, Obama is following a long tradition on the left.

The Obama Doctrine will do much harm to U.S. prestige and leadership in the world. But that may be its aim. The president promised to remake America's image, and he has. We are a weaker, smaller power than we were when he took office, and the world is more dangerous for it. The man who promised the audacity of hope to his followers has crushed the hopes of millions around the world who looked to the United States to promote human rights and democracy everywhere.