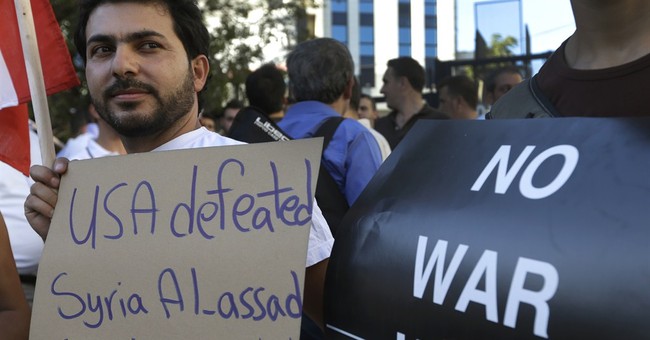 Trending
It is increasingly likely that President Obama's punt on Syria will doom effective action. Since announcing a week ago that he would seek congressional support for a U.S. military response to the Syrian regime's use of chemical weapons against its own people, he's actually lost votes from those who appeared willing to back a strike. By Friday, "no" or "leaning-no" senators slightly outnumbered those favoring action, while nearly half of House members were either firmly against or leaning against U.S. intervention, with only 24 clearly in favor. And Democrats are generously represented among those opposed.

Of course, the president could choose to ignore the vote and order military action against President Bashar al-Assad's regime even if he loses. But if he does so, the vote will make our allies even more wary of joining us and truncate U.S. options.

And perhaps that is exactly what the president wanted. He drew a red line in the sand -- no chemical weapons -- and the Assad regime flouted it, repeatedly. When pictures of Syrian bodies appeared on television worldwide showing obvious signs of chemically induced asphyxiation, the president couldn't keep doing nothing. But he doesn't want to do much -- and certainly not topple Assad. So he encourages Congress to support him, and when it doesn't, he launches a merely symbolic strike.

Sound cynical? Not judging from the president's feckless behavior on similar fronts. He did nothing to help Iranian dissidents who took to the streets to oppose the mullahs in Iran in 2009. In 2011, the president cautiously supported intervention in Libya to topple Moammar Gadhafi, but quickly handed off U.S. control of the mission to NATO and did little to nothing to ensure that the aftermath of the civil war would be better for Libyans or U.S. interests. The country now has fallen into chaos, which we tactfully ignore, despite the terrorist attack on our mission in Benghazi on Sept. 11, 2012, which left the American ambassador and three other Americans dead.

Only in Egypt in 2011 did the administration act quickly to help push Hosni Mubarak out of power. But again the administration fumbled. The Obama administration's ambassador to Egypt is widely viewed as a disaster. Ambassador Anne Patterson was quick to urge pulling the rug out from under Mubarak, who, though a dictator, was an ally of the U.S. in the region. She was also seen as an apologist for the Muslim Brotherhood's Mohamed Morsi, whose election as Egypt's president brought neither democracy nor improved conditions to the Egyptian people. His ouster by military coup has put the U.S. in the untenable position of giving nearly $2 billion in military and economic aid to a government over which we have no influence.

It is no wonder that members of Congress are skeptical of possible U.S. intervention in Syria given this abysmal record.

On the merits, it seems clear that the U.S. cannot sit idly by while a regime repeatedly uses weapons of mass destruction against its own people, especially a regime that is a major exporter of terrorism against Americans and our allies. But it also seems clear that it would be a disaster to do less than is needed to topple the regime and, most importantly, assure that the government that replaces it is not an even greater risk to American interests.

The American people reelected Barack Obama despite his miserable economic and domestic record. But foreign policy barely figured as a factor in the election at all. As incompetent as Obama has proved domestically, what he will be remembered for by history is the way in which he diminished American power and influence in the world. The American economy is resilient enough to withstand even eight years of failed presidential leadership. It is far less clear that the world will recover from the debacle of this American president without further expansion of Islamist influence and possible conflagration in the Middle East.